The president weighs in calling the protestors 'very good people,' but they're 'angry' 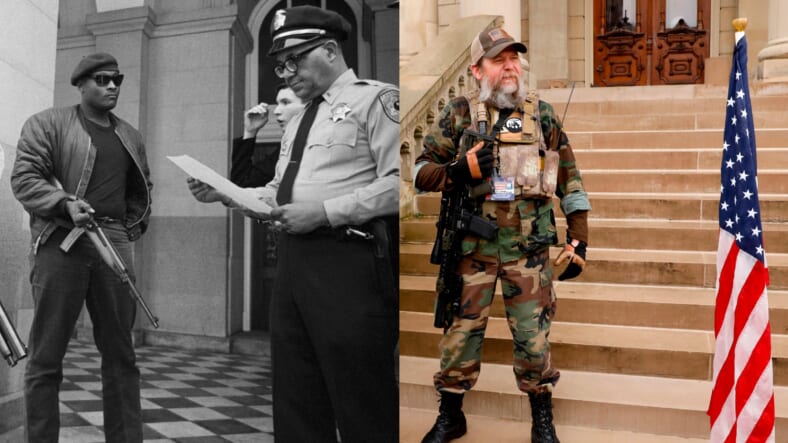 There were hundreds of protestors many of whom were carrying rifles and automatic weapons on their back. “Let us in! Let us in!” the protestors chanted.

As most of them refrained from wearing masks, they stood shoulder-to-shoulder inside the statehouse and attempted to enter the floor of the legislative chamber.

Michigan State Police kept the protestors out of the chamber where terrified lawmakers tweeted about the scene. This, the second protest against Whitmer’s order which they called an “overreach.”

Directly above me, men with rifles yelling at us. Some of my colleagues who own bullet proof vests are wearing them. I have never appreciated our Sergeants-at-Arms more than today. #mileg pic.twitter.com/voOZpPYWOs

Whitmer’s order is credited for saving thousands of Michiganders. The state has over 40,000 confirmed cases of coronavirus and over 3,700 deaths, including Michigan State Representative Isaac Robinson.

Thursday’s protest dubbed the “American Patriot Rally,” which was much smaller than the “Operation Gridlock” protests on April 15 where supporters of President Donald Trump blocked the streets in the state Capitol of Lansing. Two days later, the president tweeted, “LIBERATE MICHIGAN.”

The president weighs in again, suggesting the governor meet with protestors because they are “very good people” who happen to be “angry.”

The Governor of Michigan should give a little, and put out the fire. These are very good people, but they are angry. They want their lives back again, safely! See them, talk to them, make a deal.

The images from the protest showed people screaming in the face of police officers. Some of those protestors in the pictures are members of a group called the Michigan Liberty Militia. 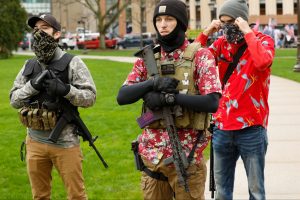 Photos of the protestors with their guns inside the hallowed halls of the state Capitol brought back the imagery of the 30 Black Panther Party members who once stormed the California Capitol building.

A History.com article explains, “that immediately following the Black Panther Party display in 1967, Mulford Act, a state bill prohibiting the open carry of loaded firearms, along with an addendum prohibiting loaded firearms in the state Capitol. The 1967 bill took California down the path to having some of the strictest gun laws in America and helped jumpstart a surge of national gun control restrictions.”

Yesterday, CNN Commentator Keith Boykin reposted an article that he wrote six years ago that asked the question, “Does the Second Amendment Only Apply to White People.”

It is a good question that many are asking.

READ MORE: Sen. Kirsten Gillibrand breaks down how she accepted her White privilege

Years of unarmed African Americans being killed by police after being presumed as a threat makes the imagery of dozens of white people carrying guns and screaming in the face of cops reek of white privilege. Many reflect on how the Black Panthers were crystallized in history and compare it to incidents like these, where even the President of the United States sides with the protestors over and against elected officials, and ask “How could it be anything else?”