Actress says that she is glad that her sister, the First Lady of So So Def, is 'living in her truth' 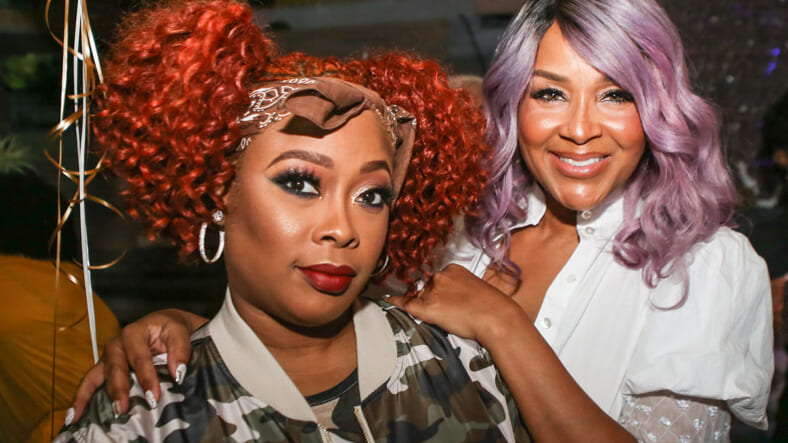 Actress LisaRaye McCoy recently did an interview where she shared that she introduced her half-sister, Da Brat, to her girlfriend Jesseca Dupart.

READ MORE: LisaRaye McCoy says she wouldn’t ‘spit’ on Duane Martin if he were ‘on fire‘

“I met her before she even met my sister. She and I were doing some videos for her Kaleidoscope products because she was actually a fan,” McCoy told MadameNoire , “they actually made a rapport with each other and built a friendship. What came out of that is what we see on Instagram now.”

McCoy went on to say that she is glad that her sister is “living in her truth.” She says, “She like it? I love it.” She says that it’s, “fantastic when you can find someone and build any kind of relationship that you can build on and that can be solid enough for you to be able to be yourself and to be able to share that with the world. That’s awesome.”

Da Brat and Dupart recently celebrated their relationship publicly when Dupart gifted the “Funkdafied” rapper with a Bentley as an early birthday gift. In a video posted on Dupart’s Instagram, the entrepreneur referred to Da Brat as, “My better half, my forever, my twin flame.”

This video was taken 3•16 …. Her birthday is 4•14 but with the way things were going and my excitement I couldn’t wait ?? it’s so crazy cuz I ordered a CUSTOM bow for the presentation and didn’t even wait on it ??? SHE HATES TO ACCEPT ANY GIFTS FROM ME , that’s y she was running . But she deserves the WORLD and so much more ? I’ve never been SOOOO happy and honestly think that it’s not only because of our connection but also because we really been to ourselves. But then all these videos keep popping up like we hiding ?? But WE BE IN PUBLIC ?? why is y’all hiding to get footage. My better half , my forever , my twin flame ??? @sosobrat HAPPY EARLY BIRTHDAY BABY BIRTHDAY ? ? ?

Da Brat later tweeted that she is a “private person” who has met her “heart’s match.”

Never have I EVER. Needless to say… I’ve always been a kind of private person until I met my heart’s match who handles some things differently than I do. Thank you baby for far more than this incredible birthday… https://t.co/D0MffqughE

Dupart is an entrepreneur and founder of Kaleidoscope Hair Products, a multi-million dollar beauty brand that she built through social media. She is also the author of When the Miracle Drops: How Instagram Helped Turn a Quick Fix into a Million-Dollar Product.

In the interview, McCoy says that she has been spending the quarantine with her daughter, Kai, and granddaughter. She expounded on numerous topics including how she stays fit at 52 and what is her “Key to the Fountain of Youth.” She told the site that she’s just totally comfortable with herself, “understanding that I’m older now, and if someone is complaining about that, someone I’m with, he’s worried about the wrong damn thing. I’m secure with me.”