Why should Black business owners trust governors’ call to reopen during COVID-19?

TheGrio Dear Culture podcast’s fifth episode, “Hell No, We Won’t Go…Outside” explores the challenges Black people face when it comes to trusting the words and laws of the United States government.

Whether it is Jim Crow, redlining, or even policing, Black people have habitually experienced racism embedded in our daily structures. And with the growth of misinformation and prioritizing of capital over human life, Black people have had reason to double down on our distrust.

“Back in [during] the Vietnam War. Black soldiers were dying at a higher rate, even though they represented a small minority of the US population,” says Dear Culture co-host, Natasha S. Alford. 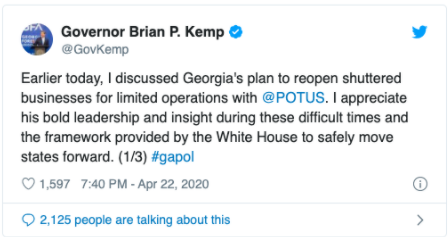 As of May 1, the re-opening of businesses has been a shotty process, with many in the Black community still choosing to say no to the governor’s decision to re-open on a limited basis.

Rapper Killer Mike, co-owner of The Swag Shop barbershops in Atlanta, spoke out against the re-opening in a TMZ video, urging Black consumers to “hold on and wait a little longer.”

“Our first concern is the safety of our employees and customers. We definitely want to make money, but we are not comfortable [with re-opening]. We are going to wait. Because of more us are dying,” said Killer Mike.

Though re-opening businesses are critical to the lives of many African Americans, putting our community’s collective health in jeopardy over capital is a seriously difficult position to be put in. One in which lawmakers have chosen to prioritize other things over flattening the curve.

“It’s going to set us back even further, if we keep walking backward,” Atlanta Mayor Keisha Lance Bottoms told CNN in a recent interview.

Both Killer Mike and Mayor Bottoms speak to the true reality that we must consistently always look after ourselves, to ensure we never halt our own progress. Be it in health or education, the Black community thrives when we prioritize our concerns, questions, and livelihoods.

Historically, the Black community has not been a priority in the eyes of law and country, and therefore, learned to remix, improvise, and take back control of their freedom.

“The tools are already there for teachers in middle school and high school and for families just sitting around trying not to go crazy, and want something entertaining to talk about as a family,” says Dr. Gates.

Tune in to Dear Culture’s fifth episode, “Hell No, We Won’t Go (Outside)” now streaming on Apple Podcast, Spotify, and Stitcher.