Mya Taylor, 18, is the latest victim of gun violence in Memphis

A Tennessee teenager should be celebrating her high school graduation. Instead, she’s the latest victim of gun violence in Memphis.

Mya Taylor, 18, was hanging out with friends on a late-night McDonald’s run. When she and her friends were in the drive-thru line at approximately 2:30 a.m.,  the car they were riding in was fired on reports People.com.

Taylor and another male in the car were both hit, but Taylor was fatally shot while a 19-year-old male was treated at an area hospital and released.  It is not believed that Taylor was the target. 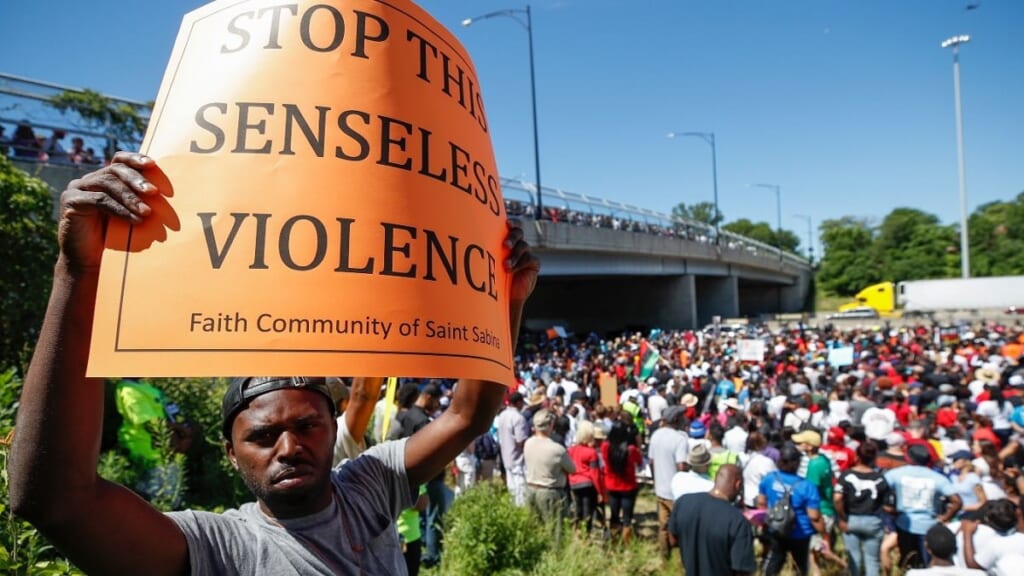 CHICAGO, IL – JULY 07: An activist holds a sign during march along Chicago Dan Ryan Expressway to protest violence in the city on July 7, 2018 in Chicago, Illinois. Anti-violence protesters aimed to shut down the northbound lanes of the major interstate in an effort to press public officials to address common sense gun laws, joblessness and access to quality education. (Photo by Kamil Krzaczynski/Getty Images)

Her best friend said they didn’t even know they were shooting at the car; they just heard gunshots and ducked down,” Taylor’s sister, Brianne Sweat, told Memphis’ WREG. “My mom received a phone call from my sister’s phone,” Sweat told Fox13 Memphis. ” Her best friend was screaming. She could hardly understand them. The only thing she could understand was that Mya had gotten shot.”

Her family says they don’t believe Taylor knew the boys that drove her to the fast-food restaurant. Sadly, Taylor had moved from the back seat to the front passenger seat when she was shot.

As the car windows were heavily tinted it’s unlikely the shooter even knew who was in the vehicle.

“It is undetermined how many suspects are involved at this time,” Memphis Police Department spokesman Louis C. Brownlee told People. “The suspect(s) fled in a silver gray four door sedan.”

The police department circulated photos of the subject on their Facebook page in the hope of finding Taylor’s killer.

Taylor’s high school Hillcrest High posted a message on their Facebook page in acknowledgment of the loss:

“Early this morning, we received word of Mya’s untimely passing and still struggling to come to grips with this sad news. Our staff and students will truly miss Mya’s smiling face and pray that her family finds peace in knowing she was loved by many, including her Viking Family. To Mya, rest well Young Queen. You are loved and will be missed!!”

Taylor is just one of the many who have died of gun violence in Memphis, which has had a history of gun violence and remains among the nation’s leaders in the statistic. In the past few years, the city’s rate of unsolved gun homicides has gone up dramatically according to a 2017 report in The Commercial Appeal.

If you have any information that might lead to an arrest in Taylor’s shooting, call Memphis Crime Stoppers at 901-528-CASH. Taylor’s sister has started a GoFundMe to raise money for her memorial service.