In a video of the arrest, the officers can be seen slamming the woman's face into the concrete sidewalk and forcing her arms above her head while handcuffed. 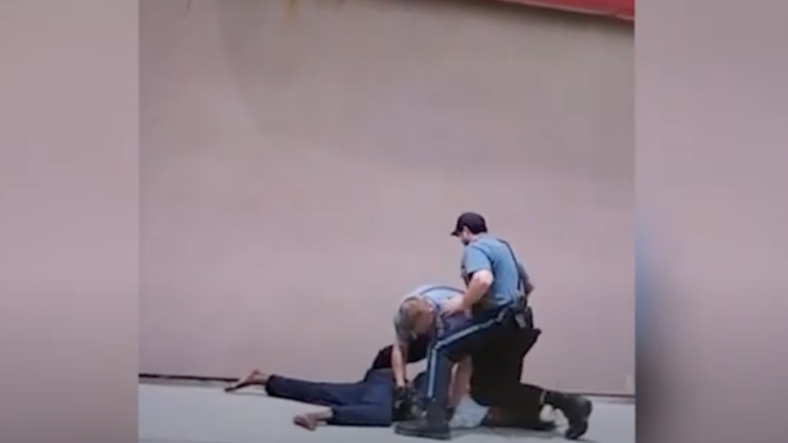 Two Kansas City police officers are shown in arresting a trans woman in a screenshot in May 2019.

Two Kansas City police offers were charged with assault on Friday, May 15, nearly one year after they were seen on video violently arresting a Black transgender woman.

In the video, which went viral in May 2019, Prichard and Brummett can be seen slamming Hill’s face into the concrete sidewalk, pressing their knees into her back, ribs and face, and forcing her arms above her head while handcuffed.

Hill was arrested at the scene and cited for several offenses including trespassing, disorderly conduct and resisting arrest.

An internal police investigation found the two officers innocent of any wrongdoing, but local prosecutors presented the case in front a grand jury who chose to charge the men.

“This case is particularly disappointing that my office was prevented from filing the charge independent of a Grand Jury,” Jackson County Prosecutor Jean Peters Baker said in a statement. “Several years ago, my office shifted our policy so we only engaged the grand jury on cases where a credibility determination must be made. This policy change was in the interest of greater transparency because state law shrouds grand jury proceedings in secrecy.”

The Fraternal Order of Police criticized the prosecutor’s office in a statement of their own on Friday.

“The FOP is aware of the unjustified misdemeanor charges filed against two exemplary police officers of the Kansas City Police Department,” the FOP’s press release read. “This is yet another example of the politically motivated prosecution that is unfortunately becoming all too common place across our country.”

Sadly, Hill was killed in October 2019 after being fatally shot at a home in Kansas City. The alleged shooter has since been charged, the prosecutor’s office announced in a press release.

Prichard and Brummett have been placed on “administrative assignment” pending the outcome of the case, according to the Associated Press.