Not only did I watch The Last Dance, the 10-part ESPN doc on the Chicago Bulls’ 1997-98 championship season that provided a welcome distraction from the sports-free world the coronavirus has wrought, I lived it. In 1998, and through most of the 90’s, I was a Contributing Editor for Slam Magazine. I interviewed then NBA stars Alonzo Mourning, Rod Strickland, and others and wrote a column about the intersection of fashion and sports.

Michael Jordan wasn’t my guy. It might be that I sensed what the doc reveals which is that for much of his hoops career he was an azz**le. To be fair, I encountered twice in his playing days and he was gracious and nice – taking a photo the first time, providing a quote the next.

I’ve read many a take on The Last Dance – that Jordan is a bitter dude, a toxic coworker and even on theGrio, that he was an unrepentant capitalist who never stood for social justice. Oh, and that his ex-wife of 17 years, Juanita Vanoy, is barely mentioned (although we do see the sides and back of her head in a video they couldn’t totally crop her out of).

So after seeing The Last Dance, you think Jordan, whose cooperation with filmmaker Justin Hehir meant he controlled the narrative, was going to give any screen time to the wife who walked away with $160M? Hahahaha. It should also be noted that Jordan’s second wife, Yvette Prieto, and their twin girls don’t make the doc at all. And it certainly could have been Vanoy’s choice to stay far away even though she told Chicago Business in 2013 she and Jordan were still cordial. 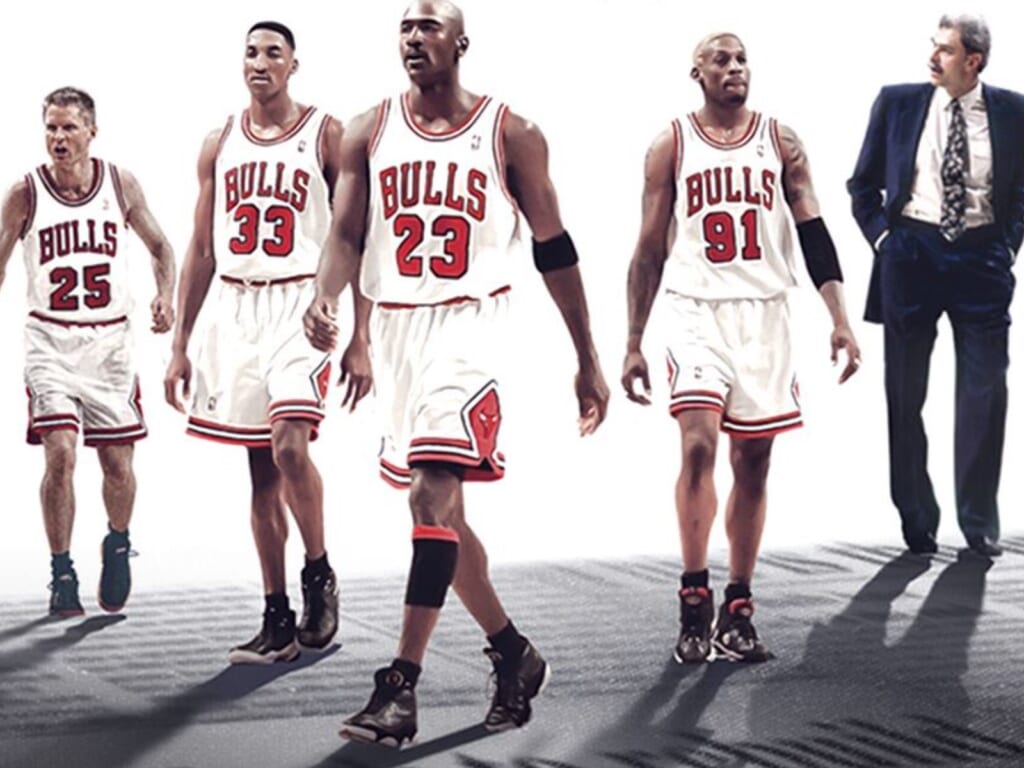 That aside, Jordan’s competitiveness was legendary. He punched at least two teammates in heated practices. He gambled with his security detail, guys who probably made .0000003 percent of what he did. He was arrogant, adamant about winning and competitive to a fault but he also led the Chicago Bulls into sports history that, like Michael Jackson’s Thriller album, can never be remade.

One of the things millennials seem to love is revisionism. You can’t view history through the lens of the present. You can only view it through the ethos of what was then going on. Did I mention I wasn’t a diehard Jordan fan back then or much of one at all?

It’s because he was just that good and he didn’t play for the Knicks, my team at the time. Remember he came back from baseball and torched them at Madison Square Garden? Yeah, it’s in The Last Dance. It’s hard to understand now, especially in the grainy video of the pre-HD era, how amazing it was to see some of the moves Jordan made so fluidly.

He didn’t get the name Air Jordan to sell shoes. He earned it by altering the space and time dimension and defying gravity. Remember, Bronsexuals, you’re watching LeBron James on a 55” inch flat-screen TV in full HD.

We watched Jordan on a 30-inch console in 90’s era video resolution and were still amazed. If you saw him play in person, it was like watching the best magician in the world do a trick that looked impossible but happened right in front of your eyes.

Jordan made people great. All of those ex-teammates looked pretty prosperous, didn’t they? Yes, they played a sport that paid well, but they also now understand that their association with Jordan was the driver that led them to athletic immortality. Even players for whom he was the reason they were denied a chip, like Reggie Miller, were kissing the ring – or more accurately, the six championship rings.

Do you think the trajectory of now Golden State Warriors coach Steve Kerr’s career doesn’t benefit from Jordan punching him in the face after Kerr pushed him? Do you not understand that as awful and violent as that sounds that when you hear Kerr talk about it, he sounds…grateful because after standing up to Jordan he knew he could handle anything thrown his way?

Did you not see the scene where Jordan stares Kerr down on the bench with an assassin’s dead eye and says in the last seconds of game 6 of the 1997 NBA Finals, with the game on the line  “You’re going to take this shot” and Kerr says “I’ll do it” and goes on to hit the game-winner? You can’t tell me Kerr didn’t ride that moment into his current position as the coach who won one more game than the 1995-1996 Bulls to establish the winningest regular season in NBA history?

But if there’s a final word on The Last Dance it’s this – Jordan profited off his talent in a way that few Black athletes do. NBA history is littered with the bodies of Black men white men profited off of and then discarded. Jordan is worth $2 billion dollars. Nike might put out his brand but it’s still called Jordan.

The logo of which, aside from the NFL shield, the swoosh, and the NBA logo, is the most instantly identifiable symbol in sports. And Jordan is the only, let me repeat, the only, African American majority owner of any major league sports team in the world.

That doesn’t make him any less than an azz. He’s not a cuddly guy, though his (current) wife and kids seem to like him. He’s 57 and like a lot of 50-plus Black men, he’s become a little more reflective and probably wants to secure his legacy in a way that he’s comfortable with. He’s not Muhammad Ali, not Colin Kaepernick although he does have an extensive list of charities he’s donated to in his native North Carolina and in Chicago.

But like former president Barack Obama, who pretty much got the last word in the doc, what Jordan has done, through grit, work ethic, and whatever that thing is that drives people to want to be excellent is set the mentality higher for the next person. Kobe Bryant was right – he doesn’t exist without Jordan.

The next Black team owner and athlete billionaire who gets paid off his own efforts, doesn’t exist without Jordan. That includes billionaire-in-the-making James. Jordan gave you the game. Now all you need to do is feed what Deion Sanders calls the “dog” within and you might be the next one. But you’ll never be that one.

Like him, love him, hate, him, what you can’t deny is that Michael Jordan achieved greatness, did it on his own terms, and profited from it. That’s true rare air.