The NBA legend's daughter says her mother is fine with staying private.

It’s been a week since its last episode aired but the streets are still talking about The Last Dance. One of the things people wondered about, after the conclusion of the doc which covered the 1998 final championship season of the Michael Jordan-led Chicago Bulls, was the absence of Jordan’s ex-wife.

He was married to Juanita Vanoy for 17 years during most of his Bulls career, including all six championships. The former couple has three kids together, Jasmine, 27, Jeffrey, 31, and Marcus, 29. In their divorce, Vanoy reportedly received a $160M settlement, making it one of the most expensive in sports history.

Jasmine, who was just 5 years old when the Bulls won their last championship, says that her mother wasn’t in the documentary because she didn’t need to be, having actually lived through it.

“I think at the end of the day, you ask my mom … she lived it,” Jasmine told Essence in a Facebook Live chat.  “There’s no need to go down memory lane and bring up everything that has already happened when the proof is in the pudding. She was at the championship, she was at the retirement ceremony, we saw her in her glory in her best way.”

It’s #GrandparentsDay • the first for my parents to celebrate. They’re the greatest parents ever and I’m so grateful for them! Keemie has incredible grandparents. Blessed beyond measures ❥

Jordan, who is now married to Cuban-American former model Yvette Prieto, with whom he has 6-year-old twin daughters, Ysabel and Victoria, has rarely spoken on his private life. Aside from his commercial endorsements, his Hall of Fame enshrinement speech, and his emotional tribute to Kobe Bryant at his memorial, Jordan has pretty much avoided the media. The interviews he did this year for the documentary were more than he’d done in years.

His ex-wife, now 60, leads an equally private life, telling Crain’s Business in Chicago in 2013 that the exes were cordial for the sake of their children. At that time, Vanoy, who remained in Chicago, was an aficionado of Bikram yoga and an avid collector of African-American art. The former couple divorced in 2006.

Jasmine says that she watched The Last Dance as a “fan” texting her father to ask him questions after the episodes aired, reports NBA.com. A graduate of Syracuse University, Jasmine works for Jordan Brand but was so young during her father’s heyday that she didn’t know a lot of the things revealed in the doc. 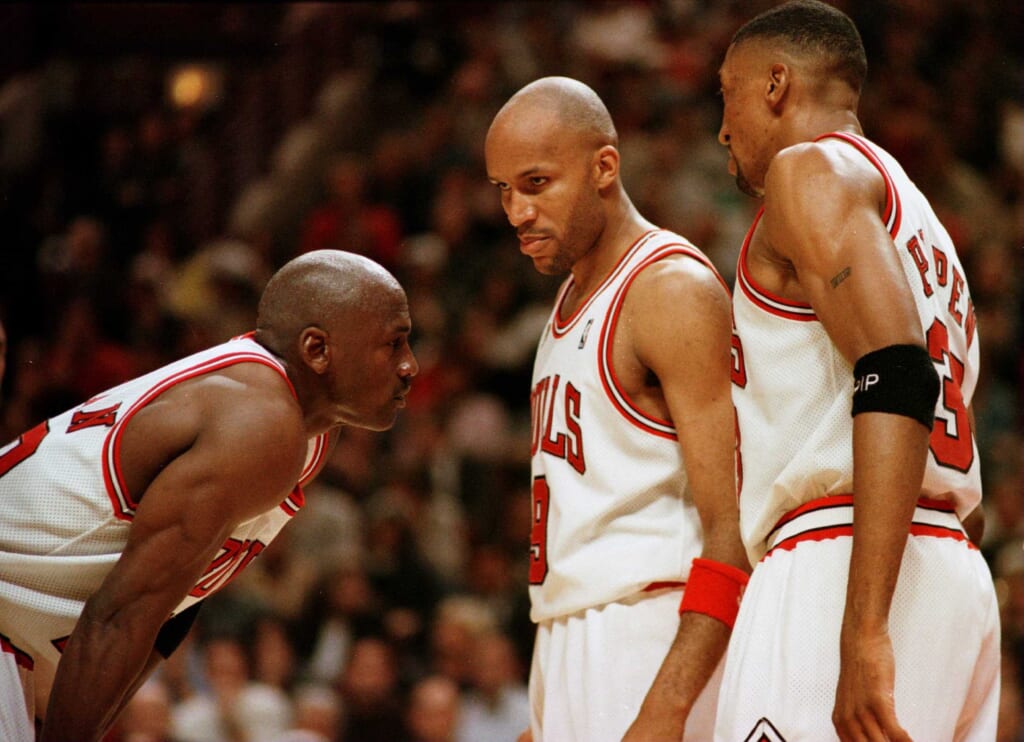 7 Jun 1996: Michael Jordan of the Chicago Bull, left, discusses strategy with teammates Ron Harper, center, and Scottie Pippen during a time-out on the court during the fourth quarter of game two in the NBA Finals at the United Center in Chicago, Illinois.

What she does know is that Jordan enjoys a very special role behind the scenes and that’s the one as grandfather to Jasmine’s 1-year-old son, Rakeem. She and her fiancé, Rakeeem Christmas, who also went to Syracuse, are planning to be married in September.

“He probably would prefer to be a grandpa than anything else in this world,” Jasmine told Huffington Post. “Him and my son have such an incredible relationship. My son’s only one, but he already has him wrapped around his finger.”