Trump wears mask at Ford plant, refuses to do so in front of cameras 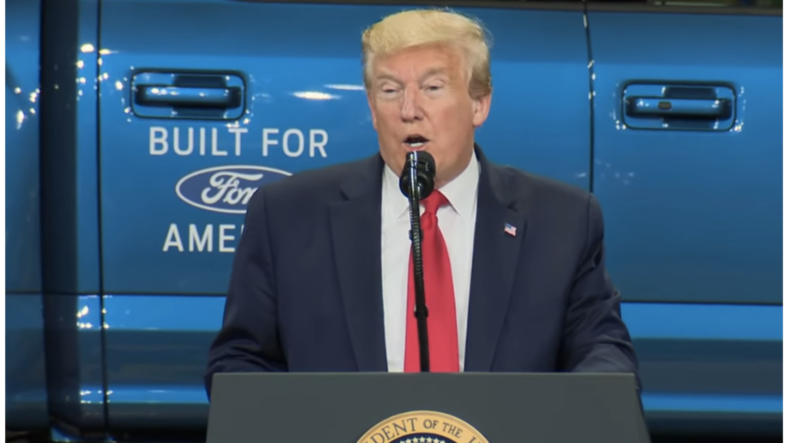 President Donald Trump visits the Ford's Rawsonville Components Plant on May 21, 2020 (Screenshot from the White House YouTube from his speech at the plant)

During his visit to Ford’s Rawsonville Components Plant in Michigan, a site that has been repurposed to build ventilators, President Donald J. Trump refused to wear a mask in front of cameras.

The president explicitly said, “I didn’t want to give the press the pleasure of seeing it.”

According to the president, he wore it “backstage,” while touring some parts of the plant, but when the cameras were rolling he took it off. He did, however, show off what his mask looks like. It is a personalized navy blue mask with the presidential seal.

“I had one on before,” the president said according to Fox News. “I wore one on in this back area. I didn’t want to give the press the pleasure of seeing it. In the back area I did have a mask on. I had goggles and a mask right back there.”

While talking to the group, Trump pulled out the mask to show the press that he not only had the mask but enjoyed wearing it.

There is one image of the president in a mask that was captured by an unidentified person and posted to Twitter.

President Trump said he didn’t want the press (i.e. the American people) to see him wearing a mask during Thursday’s tour of a Ford plant in Michigan. But he wore one earlier, away from the pool – and someone who doesn’t wish to be identified took this shot pic.twitter.com/6Pxj68lu35

At the Ford event, Trump dismissed the idea that by not wearing it in public he sends a dangerous message to Americans who have been encouraged by the CDC to wear some form of face-covering in all communal places to slow the spread of COVID-19.

One Twitter user had a reply to that idea, saying that Trump refusing to wear a mask sends a message to his supporters that says, “be selfish like me.”

Trump not wearing a mask in public sends two messages:
1. To his followers it says: Be SELFISH like me.
2. To the rest of us it says: I do NOT care if your loved ones die from COVID-19-I won’t even take the easiest step to protect your family from the virus.#Trumpism #StayANGRY

The president’s visit to the Ford plant was significant because the plant is building ventilators to respond to the nationwide shortage that existed at the beginning of the pandemic.

Before his visit, Michigan’s attorney general, Dana Nessel, wrote a letter saying that the president had a “moral and social obligation” to wear the face-covering.

In an interview with CNN, she called the president a “petulant child,” and said, “He is a ridiculous person and I am ashamed to have him be President of the United States of America.”

In return, he attacked Nessel on Twitter saying she shouldn’t be taking her “anger and stupidity” out on Ford.

Do nothing A.G. of the Great State of Michigan, Dana Nessel, should not be taking her anger and stupidity out on Ford Motor – they might get upset with you and leave the state, like so many other companies have – until I came along and brought business back to Michigan. JOBS!

Trump has contended that he doesn’t need to wear a mask because he is tested for coronavirus daily.