Black women open up about dating other POC amid Hollywood spotlight

For many Black women who are in interracial relationships of color, Hollywood's recent representation is a welcome change.

For decades, interracial relationships in Hollywood were rarely, if ever, seen. When pairings did grace our screens, such as in 1957’s Island in the Sun, the pairing was almost always limited to a person of color and a white protagonist.

In recent years, however, that’s begun to change. Audiences can now see Black women at the forefront of many of these relationships, and they are often paired with other people of color. Yara Shahidi and Charles Melton played two characters in the throes of young love while dealing with cultural differences in 2019’s The Sun Is Also a Star, Yvonne Orji‘s Molly is currently unpacking the highs and lows of interracial dating in her relationship with Alexander Hodge‘s Andrew on Insecure and Issa Rae and Kumail Nanjiani showed off the humor of their unique pairing in 2020’s The Lovebirds.

For real-life interracial couples of color, this representation is long overdue. Since 1980, the percentage of recently married Black people with a spouse of a different race or ethnicity has more than tripled, from 5 percent to 18 percent, according to a 2015 Pew Research Center study. theGrio sat down with two Black women who are dealing with the realities of interracial dating between people of color and defining what love looks like for them. 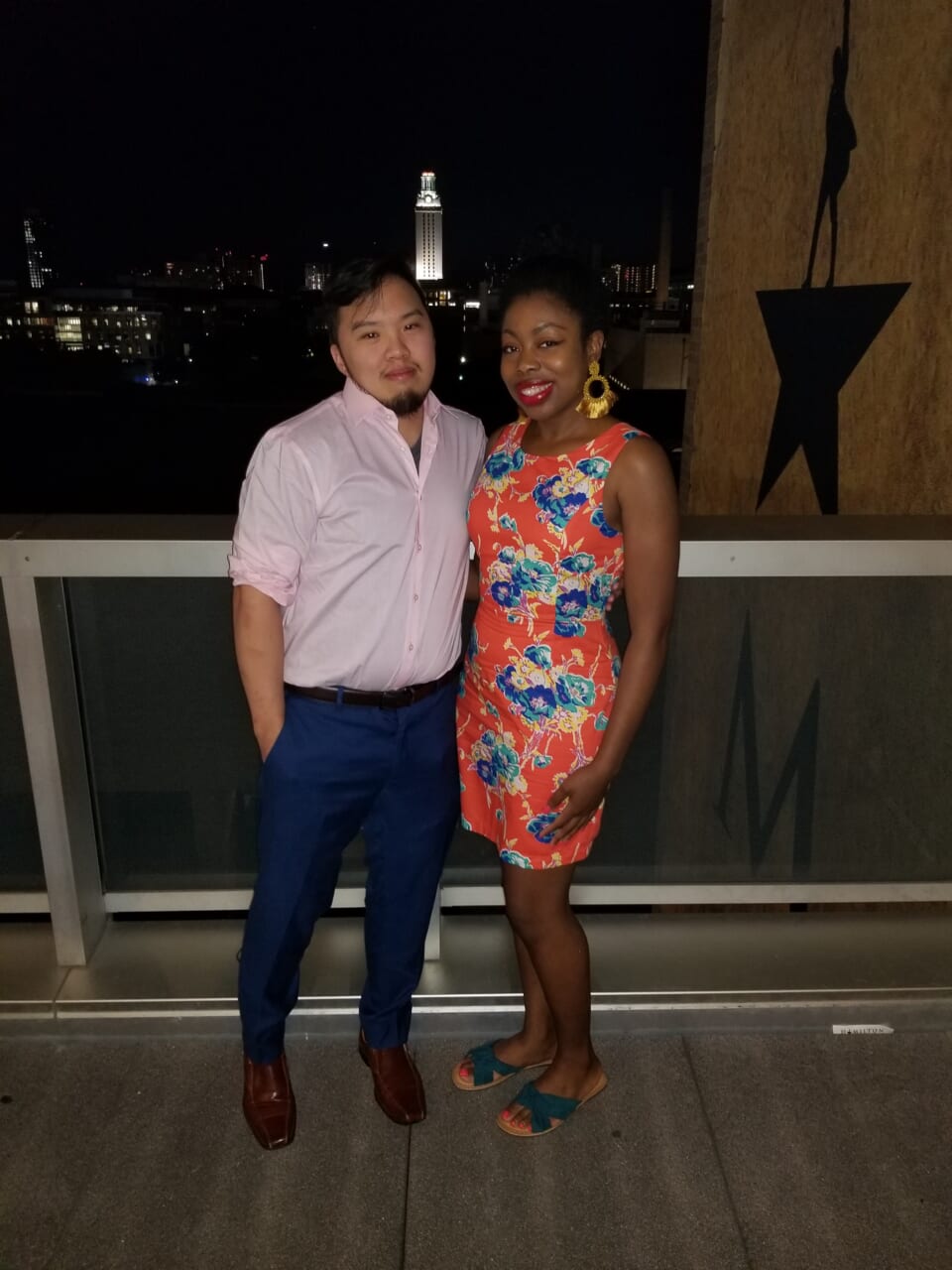 Tabitha, 30, and her fiancé, David, 29, met as many millennials often do: on a dating app. The twosome connected on OkCupid (“not Tinder!” Tabitha stresses) in 2016, and the rest, as they say, is history.

“I had just moved to Louisiana to teach, and I was like, ‘Yeah, you know, let me check [it] out, see what’s out there.’ So I got online and we started talking and then we met and pretty much we’ve been together ever since,” the grad student explains. “He did move for like six months to another city, but after he returned to Louisiana, we’ve been together ever since.”

Tabitha, a Black woman, had never been in a serious relationship with a person of another race. David, who is Vietnamese-American, has been dating interracially since middle school. While she may have been inexperienced with the interracial dating world, Tabitha was open to finding love in any culture, with her family and friends cheering her on.

“I would say like, merging cultures, per se, isn’t the hard thing. You know, there’s like different foods and there’s different ways of speaking and things like that. But that’s not necessarily difficult for us,” she says. “I’ve never had any pushback from friends [or family]. We’ve been together for three years now. I’ve never had anyone say anything negative to me about it at all—now I don’t know what they say behind closed doors—but they don’t say it to me. So it’s not an issue, my immediate family’s great about it.”

READ MORE: Single and searching? The DMs can be your best friend

Strangers, however, are a different story. Tabitha and her fiancé have received “weird” looks from people on the street, random high fives from strangers in Walmart (“very random,” she says) and one particularly outrageous reaction from a coworker (“I guess she didn’t know he was going to be Asian,” she explains).

These experiences, Tabitha says, are well worth it for the love she has gained.

“At the end of the day, as I always say, I’m always going to be a black woman,” she stresses. “So like, my ancestors will always be Black. My mom and daddy are Black. My niece and nephews are Black, my sister’s Black. So at the end of the day, I’m always going to have that tie for my own personal identity and my own experiences to being a Black woman in this world. When we get married, when my last name changes, when I show up to a job interview, people are still gonna be like, ‘Oh, your last name was this on the paper, but now I see you’re a Black woman,’ and they will treat me as such.”

She continues, “But I will say this is the best and most easiest relationship I’ve ever been in. Like, I wouldn’t be getting married or be engaged if it wasn’t. So even though there are going to be cultural differences sometimes—and maybe when we start thinking about having kids or things like that, we’ll navigate that space with them, helping them discover their identity. …But for us, I feel like it’s such a cohesive, easy relationship, like we just mesh together. We’re great together as two people, it’s not this ‘strange, every single day is a struggle’ type of thing. We’re normal folks. We do goofy things at home, we’re goofy all the time together, we laugh together, you know, we do life together.”

Yara Shahidi and Charles Melton are pictured in a YouTube screenshot from The Sun is Also a Star. (Credit: Warner Bros.)

For Tabitha and David, who are planning a multicultural wedding with Vietnamese and Black cultural elements, Hollywood showcasing a love like theirs is a welcome change.

“We saw [The Sun Is Also a Star] because we thought that was a very interesting casting and dynamic. …I remember seeing the trailer for [The Lovebirds] and I was like, ‘Oh, that’s like really great,’ in that there is representation,” she dishes. “Because it does really get on my nerves, when we talk about interracial couples that it’s always a white partner and a black partner. Because it’s not everybody’s reality. Seeing different pairings on screen gets people used to this idea that when we say interracial, we don’t always mean she’s dating a white man, right, as a Black person. I think that it opens the conversation up to discussing issues that come up when you’re dating another person of color.” 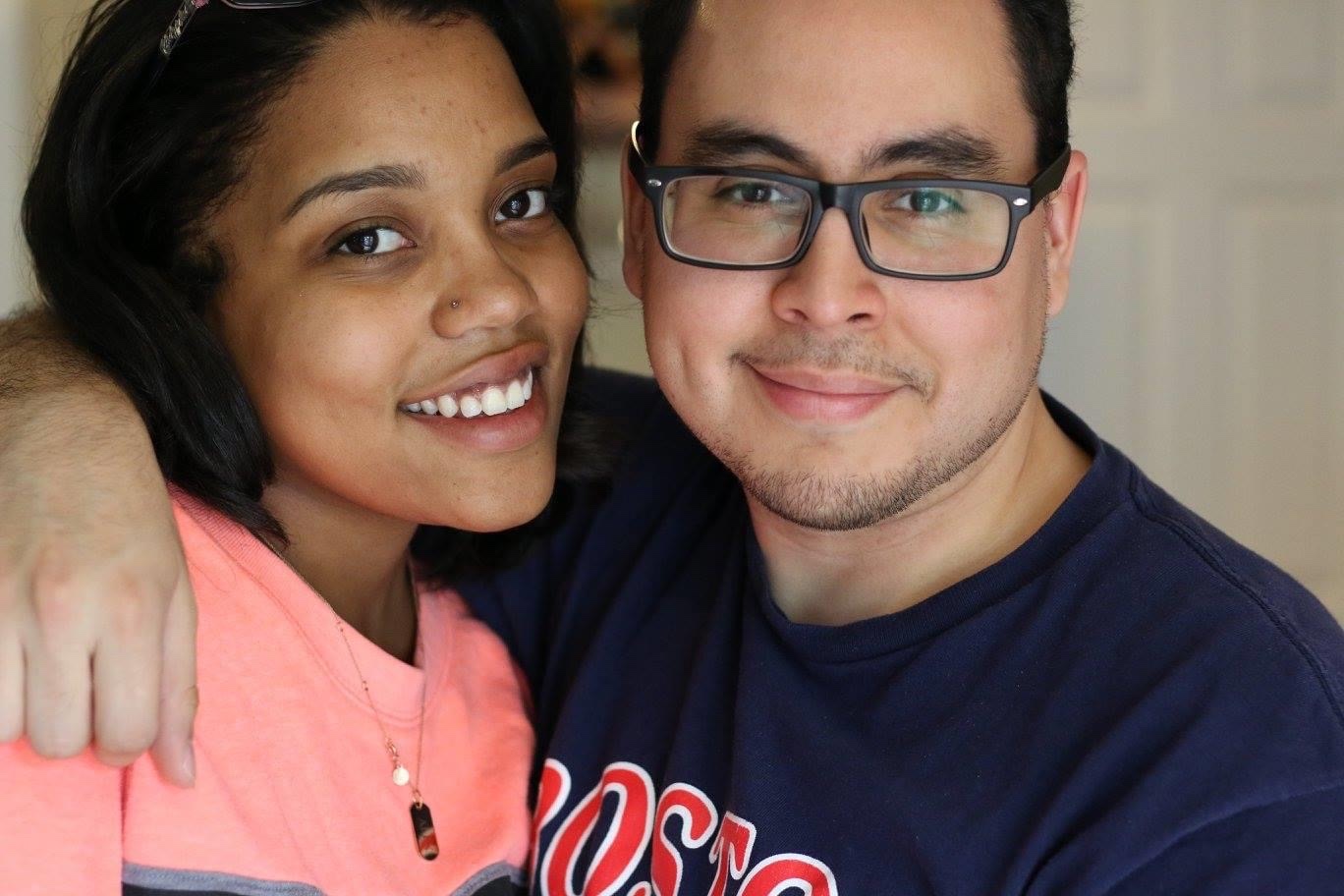 April and Alex’s love story is in a beautiful place today, but it wasn’t always that way.

The 29-year-old Pre-K teacher, who is Black, and her boyfriend, who is Latino, met through his sister at the University of Maryland, Baltimore County in 2015. The two fell hard and fast for one another, saying “I love you” within two weeks of meeting. And while Alex’s sister was supportive of their blossoming romance, the rest of his family initially struggled with their union.

“It’s been hard, I’m not going to lie. You’d think it’d be easy because we all kind of fight the same battles, you know, when dealing with white privilege and low-key racism and things like that. But actually, it’s been really hard because I didn’t realize just how different Latinos and Black people act towards one another,” April explains. “When we first started dating, it was very rough. The first two years of our relationship was rough. His mom didn’t like me, she thought I was, like, dirty because I was Black and all these things and thought, ‘She’s gonna be a bad influence.'”

April says that during the course of their relationship, Alex’s family would express their disapproval repeatedly—to the point that April had to change her phone number to avoid the constant questioning.

“I had Latino friends of course, [but] I’ve never dated a Latino guy. We’ve been dating for five years now, so that’s all water under the bridge, forgive and forget. But, you know, I would get called the N word,” she says. “They’d think that I wasn’t about anything and that I was just gonna be like a low-life influence on him. Of course, it hurt my feelings and in the beginning relationship, I would get harassed a lot. In the third month of our relationship, I had to change my phone number because I would just get called all the time, in the middle of the night if he was with me. They’d blast my phone to see where he was and you know, it was just like a lot of BS.”

Alex would do his best to fight for his relationship with April but was met with constant resistance. The tension was very difficult for him to handle, according to his girlfriend.

“He’s a very soft spoken guy, for him to get angry [is rare],” she says. “So, it was seeing a different side of him, like, getting super angry with his family and just, you know, not knowing what to do. But then eventually, it was just like, ‘We’re gonna live our life and we’ll just go from there.’ And, you know, time heals everything.” 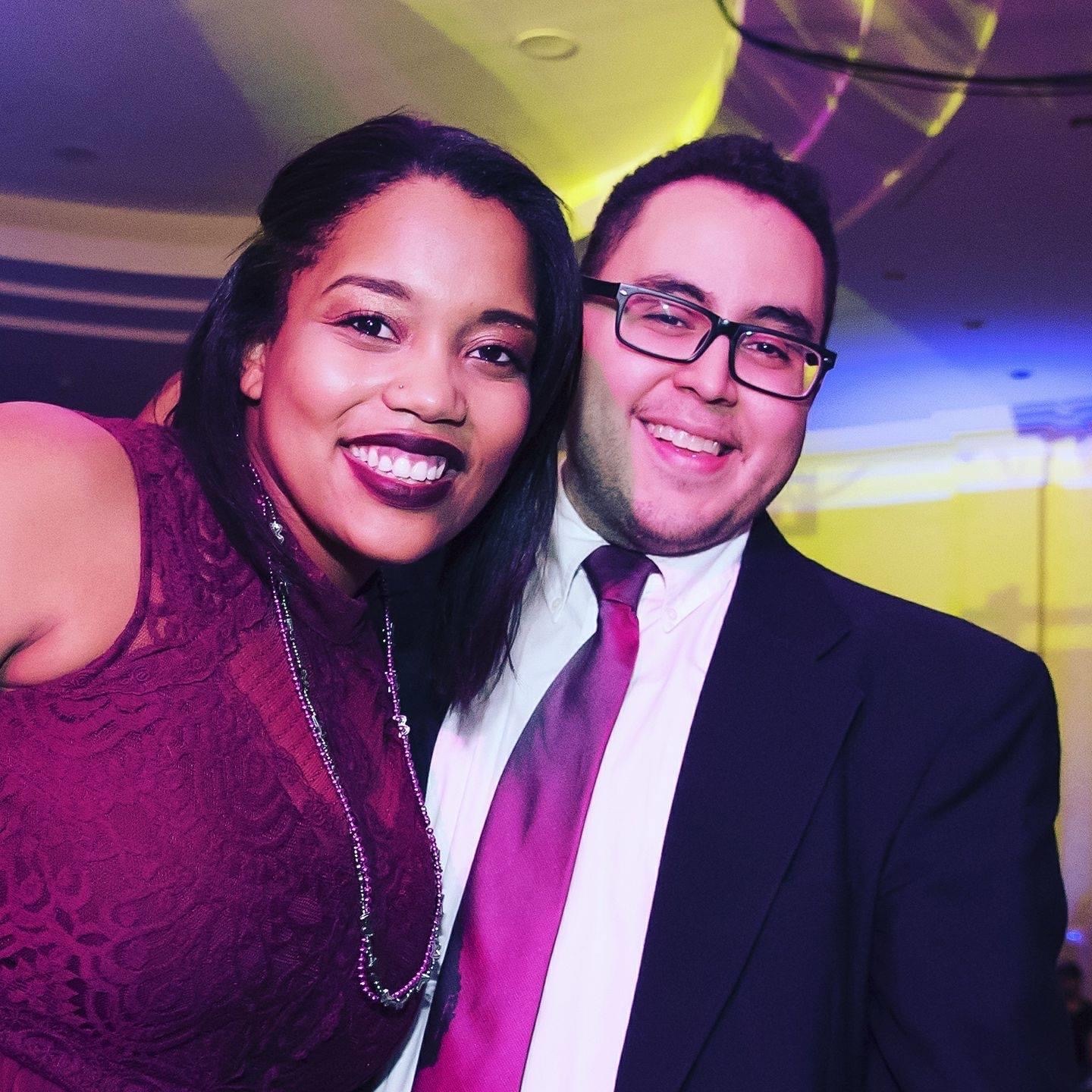 Today, Alex’s family is supportive of their interracial romance, and April’s family has loved Alex “from the beginning” when he met them at a family reunion.

“We can all hang out together, you know, we’re at the house all the time,” she explains. “In college, I studied Spanish and tutored Spanish so now my Spanish has gotten a lot better. I can enjoy casual conversations and my comprehension is that much better because I’m with someone who speaks Spanish, and has Spanish-speaking family. We’ve been together for a long time, so of course, you talk about kids. We want our kids to be bilingual. I think that’s like probably one of the most positive things is just, you know, the different culture, different foods, different language.”

As far as Hollywood representation goes, April couldn’t be happier about the growing examples of people of color falling in love on screen.

“We’re always seeing same-race relationships in movies, and then it kind of like, we got to seeing Black and white relationships mostly,” she dishes. “I think interracial relationships [of color] are really beautiful. Because both parties have the same struggles, like I had mentioned earlier. I mean even though we come from different cultures, and it’s something that you can relate to. I don’t like to say that—don’t confuse love for being related to each other’s trauma, but I think this is something that’s a foundation.”

So, what advice would April and Tabitha give to other Black women who are considering dating another person of color?

“Do your own thing with your life. If you’re not hurting anybody, then it shouldn’t matter,” April says.

“A lot of times we look at very surface level things in relationships, especially when we’re younger, we’re looking for these markers of compatibility that don’t necessarily make the relationship great,” Tabitha adds. “Sometimes it’s like the smaller, quieter details in your relationship that really help you connect with a person or things that you haven’t even thought about. Once you start talking to a person and being open to people, you will find that you connect with them in different ways than you ever knew you would.”