Atlanta cop draws praise from protesters: ‘They have a right to be pissed off’

The officer expressed his empathy, saying he has to have the infamous talk with his own sons 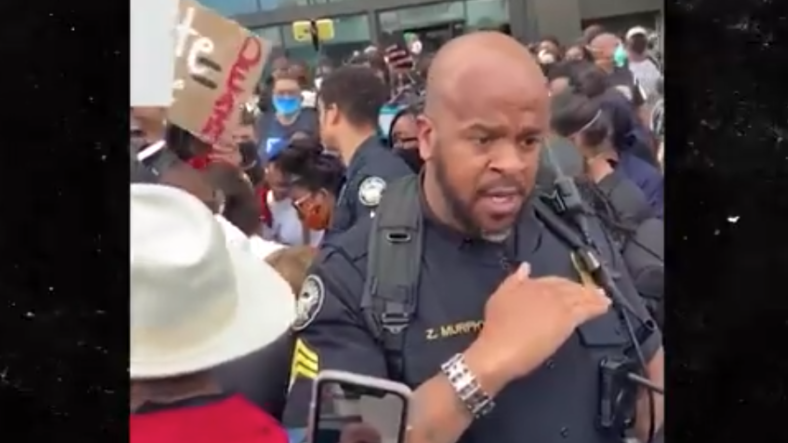 Protesters all over the country have been at odds with law enforcement over the senseless killing of George Floyd by Minneapolis police officers earlier this week.

As demonstrators clash in standoffs with cops across the country, one Atlanta officer is being praised for expressing his own concerns during a protest in the city Friday.

TMZ released a video that showed the Black officer, identified only as Z. Murphy on his uniform, revealing his empathy for their frustrations about the incident that led them there.

According to TMZ, Murphy stepped in when fellow officers were ordering the crowd to leave over loudspeakers.

“What was going on up here was wrong. That’s why we brought it to a stop,” he stated. “The loudspeaker. The yakking and the yapping. We said, ‘pause, let these people remain here, let them stay in the street, let them express their grievances because they have a right to be pissed off.'”

His words caused many of the protesters to cheer and give the officer dap of approval.

“You need to give that energy to some of your fellow officers,” one protester said.

“Y’all need to be like him,” another exclaimed for other officers to hear.

“One at a time,” Murphy replied.

Atlanta is just one of the many American cities that have seen protests, sometimes violent, in the aftermath of the Floyd murder. Georgia’s governor declared a state of emergency Saturday morning, activating the state National Guard as protests in Atlanta, known as the Black mecca, turned violent in some cases.

CNN‘s headquarters in downtown Atlanta became a target of the civil unrest, where windows were broken and the news company’s iconic logo sign was defaced as police confronted demonstrators. A restaurant was also set ablaze in the Buckhead neighborhood.

CNN HQ in Atlanta getting overrun by leftist protesters that they themselves whipped into a frenzy.

Many are defacing and vandalizing the giant CNN logo outside the building.

You're watching Dr. Frankenstein get destroyed by his own monster.#GeorgeFloyd pic.twitter.com/i6EP0Tl8z5

“This is not in the spirit of Martin Luther King, Jr.,” Atlanta Mayor Keisha Bottoms said while pleading for peace. “You are disgracing the life of George Floyd and every other person who has been killed in this country.”

"If you care about this city then go home." Atlanta Mayor Keisha Lance Bottoms was visibly angry at a news conference during the Atlanta protests on Friday https://t.co/RyApQwICJx pic.twitter.com/3sPHG4t474