As multi-day protests continue to erupt across the country, Trump suggests Saturday night is 'MAGA NIGHT AT THE WHITE HOUSE' 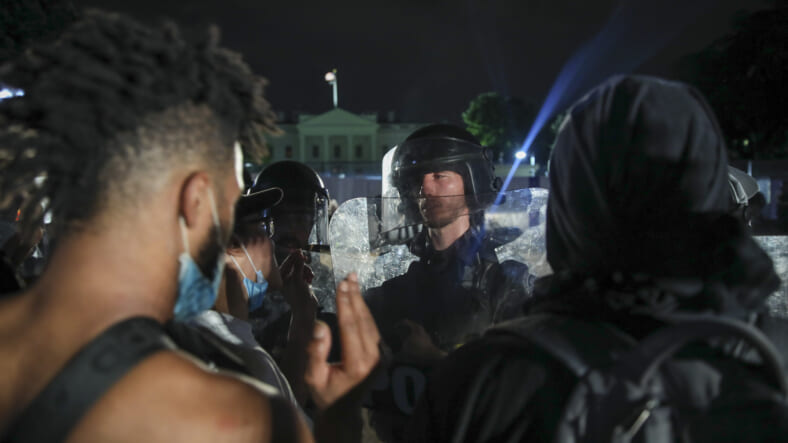 Demonstrators hold a protest in response to the police killing of George Floyd in Lafayette Square Park near the White House on May 29, 2020 in Washington, DC. (Photo by Tasos Katopodis/Getty Images).

George Floyd protests practically reached the front door of the White House on Friday, triggering another harsh warning from President Donald Trump reminiscent of the 1960s.

Trump, who came under fire earlier that day for suggesting that looters would be shot in Minnesota, applauded the U.S. Secret Service for protecting him inside the Washington, D.C. property and threatened angry protesters with “vicious dogs” and “ominous weapons,” should they cross a line.

In a string of tweets Saturday morning, the president said the law enforcement agency acted “not only totally professional, but very cool” and that he “couldn’t have felt more safe” inside his current residence.

Demonstrators clash with police during a protest in response to the police killing of George Floyd in Lafayette Square Park near the White House on May 29, 2020 in Washington, DC. (Photo by Tasos Katopodis/Getty Images).

As for the demonstrators, Trump suggested they were “professionally organized” and, should anyone breached the fence on the property, they would be “greeted with the most vicious dogs, and most ominous weapons, I have ever seen.”

….got too frisky or out of line, they would quickly come down on them, hard – didn’t know what hit them. The front line was replaced with fresh agents, like magic. Big crowd, professionally organized, but nobody came close to breaching the fence. If they had they would….

….good practice.” As you saw last night, they were very cool & very professional. Never let it get out of hand. Thank you! On the bad side, the D.C. Mayor, @MurielBowser, who is always looking for money & help, wouldn’t let the D.C. Police get involved. “Not their job.” Nice!

As reported by Fox News, Secret Service agents, armed with riot gear, kept many protesters at bay at Lafayette Park across from the White House fence. Riot police and protesters clashed that night over temporary barriers.

The police have been getting extremely aggressive in front of the White House. I took a nasty blow to the head as these cop started throwing punches at DC residents and the journalists covering their protest of the execution of George Floyd. pic.twitter.com/VLw8TnSWCu

“They let the ‘protesters’ scream & rant as much as they wanted,” according to Trump’s account of the scene. If protestors “got too frisky,” Secret Service agents “would quickly come down on them, hard – didn’t know what hit them,” he wrote in the Twitter post.

In a later tweet, Trump publicized that it could be “MAGA NIGHT AT THE WHITE HOUSE,” referring to his “Make America Great Again” slogan that helped elect him to the top office in 2016.

He also minimized the D.C. demonstrators, accusing them of being “professionally managed so-called ‘protesters.'”

The professionally managed so-called “protesters” at the White House had little to do with the memory of George Floyd. They were just there to cause trouble. The @SecretService handled them easily. Tonight, I understand, is MAGA NIGHT AT THE WHITE HOUSE???

Trump’s comments are the latest in a mix of oft-repeated statements harking back to a time in America that was not so welcoming to Black people. Black Americans have argued that the “Make America Great Again” slogan itself does not reflect any time in history that the country was great to or for the Black community. 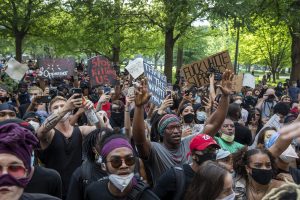 Demonstrators hold a protest in response to the police killing of George Floyd in Lafayette Square Park on May 29, 2020 in Washington, DC. (Warning: Image contains profanity) (Photo by Tasos Katopodis/Getty Images)

In early morning tweets on Friday, Trump called Minneapolis rioters “THUGS” and said “when the looting starts, the shooting starts,” a phrase once made by former Miami Police Chief Walter Headley as part of his approach to handling Black protesters in 1967. The phrase was also used by segregationist George Wallace during a presidential bid the following year, according to NBC News.

Twitter slapped a warning sign on the tweet from Trump, who claimed ignorance to the origins of the phrase while defending his intentions behind the statement. The line “when the looting starts, the shooting starts” caused the social media site to censor the tweet for violating its policies on “glorifying violence,” Reuters reports.

Trump’s threat to sic dogs on protestors at his Pennsylvania Avenue residence also calls back to a violent scene earlier that decade. In 1963, peaceful demonstrators in Birmingham, Alabama, whether man, woman or child, in response were attacked by the state with dogs and fire hoses. Images captured from the protests are some of the most widely seen pictures from the movement for civil rights in the 1960s.

Fire fighters use fire hoses to subdue the protestors during the Birmingham Campaign in Birmingham, Alabama, May 1963. (Photo by Frank Rockstroh/Michael Ochs Archives/Getty Images)

The nation’s capital is just one of the many cities protesting the death of George Floyd, a 46-year-old Black man, at the hands of Minneapolis police officers.