‘Insecure’ episode 8 recap: Issa and Lawrence are happy apart, but can they be happy together?

Issa and Lawrence go on the perfect second first date and literally put everything out on the table. Are they about to head down a dangerous road or will it be the promised land?

This episode was meaty AF. Delish. Let’s get into it!

On the last episode, we ended with Lawrence calling someone, come to find out, it was our girl, Issa, and he asked to meet up for drinks. He missed her.

And now, there they go…on a date. Issa was looking all good and being her awkward self, of course she falls. But she still looks good. And Lawrence knows it. He looks good too. The familiarity makes them cute together. We’ve never gotten to see them together as a couple outside of them Lawrence being in a rut, getting cheated on, them breaking up and the awkward aftermath. But now they’ve seemed to work past that and found a very comfortable spot. It feels good. I know I was smiling the whole time.

Lawrence explained why he wasn’t able to make her block party, he was in San Francisco making grown man moves, something he wasn’t doing in his relationship with Issa. And then he said, “I don’t want to be afraid to move on from sh*t.” What do you mean Lawrence?!

READ MORE: Insecure’s Nathan reminds us that Black men are allowed to struggle with mental health too

What exactly is going on with Lawrence and Condola? Nothing makes an ex feel territorial like the new bae. Especially when you know they’re not together anymore, but still doing that lingering thing. Issa knows something is up, but she doesn’t know what.

Like us, Lawrence wanted to know what happened between Molly and Issa and Issa avoids that conversation. Sis, we wanna know too! But alas, they need to relocate to a quieter place for the kind of conversation Lawrence has planned for Issa. 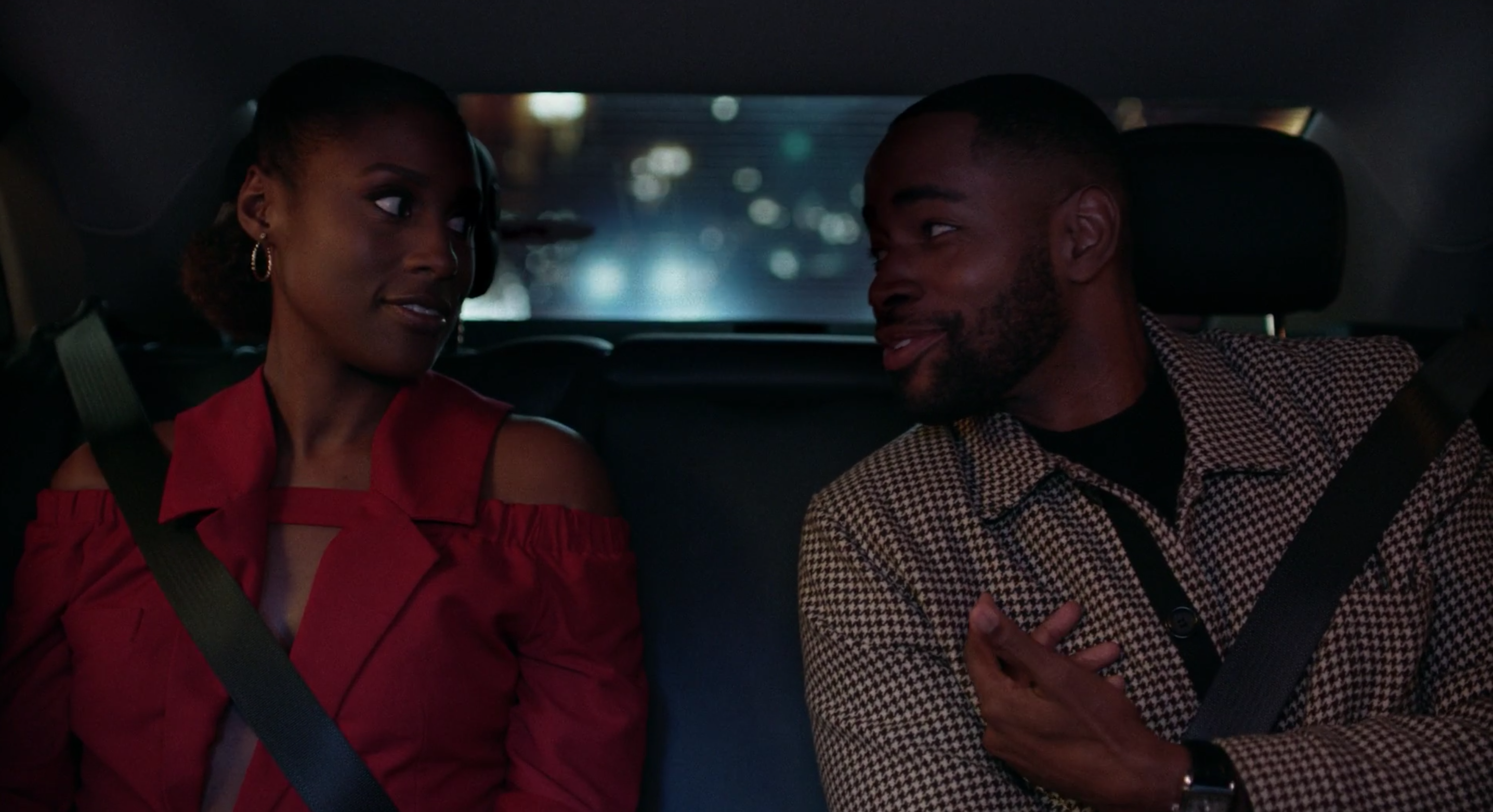 To Kelli’s point a few episodes back, Lawrence is most certainly looking like a provider! It’s nice seeing how Lawrence and Issa interact. We’re getting a peek into their five years together, those moments that glued them together. So cute. Issa got Lawrence out here giving us gentleman vibes and ordering a Lyft Luxe. Ok Lyft Luxe Lawrence!

Sidenote: Why is there always someone old and wise in these Insecure episodes lately? Remember Lyft conversations with drivers that you never wanted? This oracle driver was talking marriage about them because they were giving off them adorable Black love vibes and she said, “You better go and lock that down if that’s the one you love.” Lawrence admitted to actually purchasing a ring for Issa. The Lawrence who bought the ring wasn’t ready, but the Lawrence who told Issa, “Let’s not do the tip toe sh*t tonight. No egg shells. We know each other too well for that.” That Lawrence was ready to put the ring on it. Maybe not, but this is a new and improved Lawrence who is ready for open, honest dialogue and growth. We love to see it.

Wait, am I #LawrenceHive now?!

Have you ever loved and lost someone? This conversation between Issa and Lawrence about their relationship, after establishing they wouldn’t pussyfoot around each other, is everything you wish you could have with that someone you loved and lost. It was such an open, honest conversation that didn’t allow emotions to shift it away from the meat of it. The things that they said to each other were mostly the things that they didn’t say to each other while they were in the relationship. The space and time apart and out of their relationship has allowed them the emotional intelligence to confront those things unapologetically. It was almost cringey to watch, but in a good way like you’re actually getting a peek into this intimate moment in a couple’s love story and you shouldn’t be hearing the things they’re saying.

I couldn’t get enough. Oh Lawrence, you been thinking about “us?!” And he was asking all the good questions too: “What would’ve happened if we stayed together?” That’s the ultimate question you’d want any ex that you’d get back with to ask you. “Do I give up too easily on things?” Lawrence wondered.

“I do wish you hadn’t given up on us,” Issa said. He did. And at the time, we thought it was because he was so hurt about being cheated on.

And in that moment, Lawrence asked Issa, “Why Daniel?” 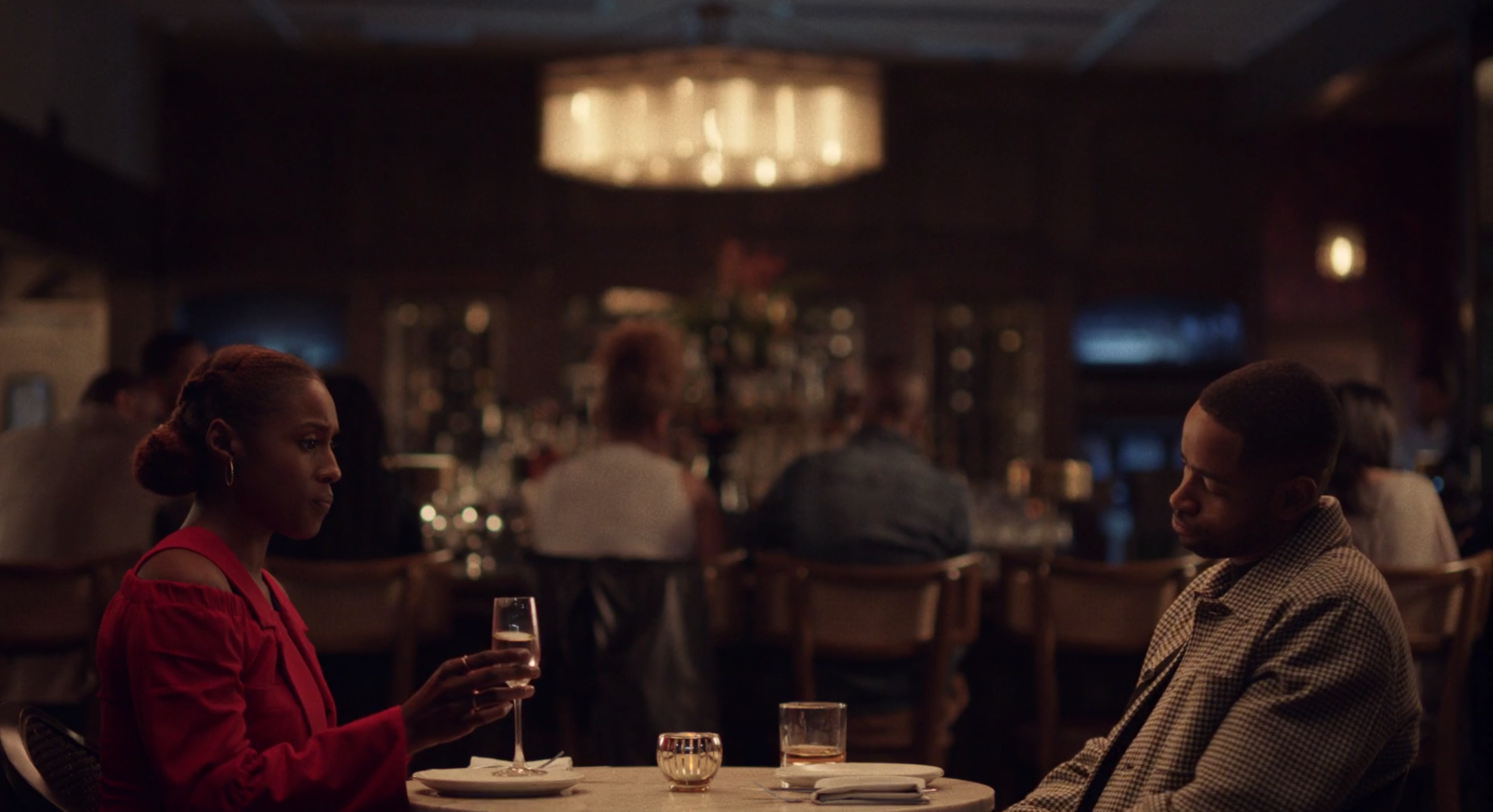 Stomping, Issa said, “He gave me attention when you weren’t. It felt good to feel wanted.” She told Lawrence that he didn’t want her. He had no idea things were that bad between the two of them and she had no idea he was going through his own stuff. Issa told Lawrence a brutal truth and that was that she’d drive around sometimes to avoid coming home. That could have crushed the man, but he was honest with himself about the relationship and decided to finally be open with Issa about what happened.

Lawrence explained to Issa that he was sad about his own situation of not having a job and couldn’t make moves as Issa was making her own moves, even though sis was going to a job she loathed. It was easier for Lawrence to blame Issa for everything that went down between them than to deal with what he did or didn’t contribute to their relationship. When Issa asked why didn’t he tell her that, he said, “I just couldn’t.”

They faced the fact that they weren’t communicating at all in their relationship and that’s ultimately what ended it. And then Issa asked Lawrence a question. It was about the ring. She confirmed that Lawrence did indeed buy her a ring, she hung her head, likely sad that she let Lawrence go. “You just realized you ain’t sh*t huh?” Lawrence asked, making fun of Issa.

“I really wasn’t sh*t, but I’m the sh*t now, you missing out!” Issa bragged and laughed.

The phone buzzes almost on cue and, of course, it’s Condola. They’re still talking and have plans, but Condola wants to move those plans to that very night. Instead of saying no, Lawrence strings her along and tells her that he’ll hit her later. Maybe he thinks the night isn’t going to go long with Issa, or maybe he’s–like he said before–gives up on things too easy and wants to practice not doing that with Condola?

Even after an awkward TSA booty call run-in, Issa doesn’t want to end the night. Neither does Lawrence, but he pretends like he wants to. Maybe at this point, he should let Condola know that he won’t be available that night, but he doesn’t. He and Issa go to the Art Walk. More adorable moments ensue. Silly puns, art talk and they flirt about Issa’s new ambitions. 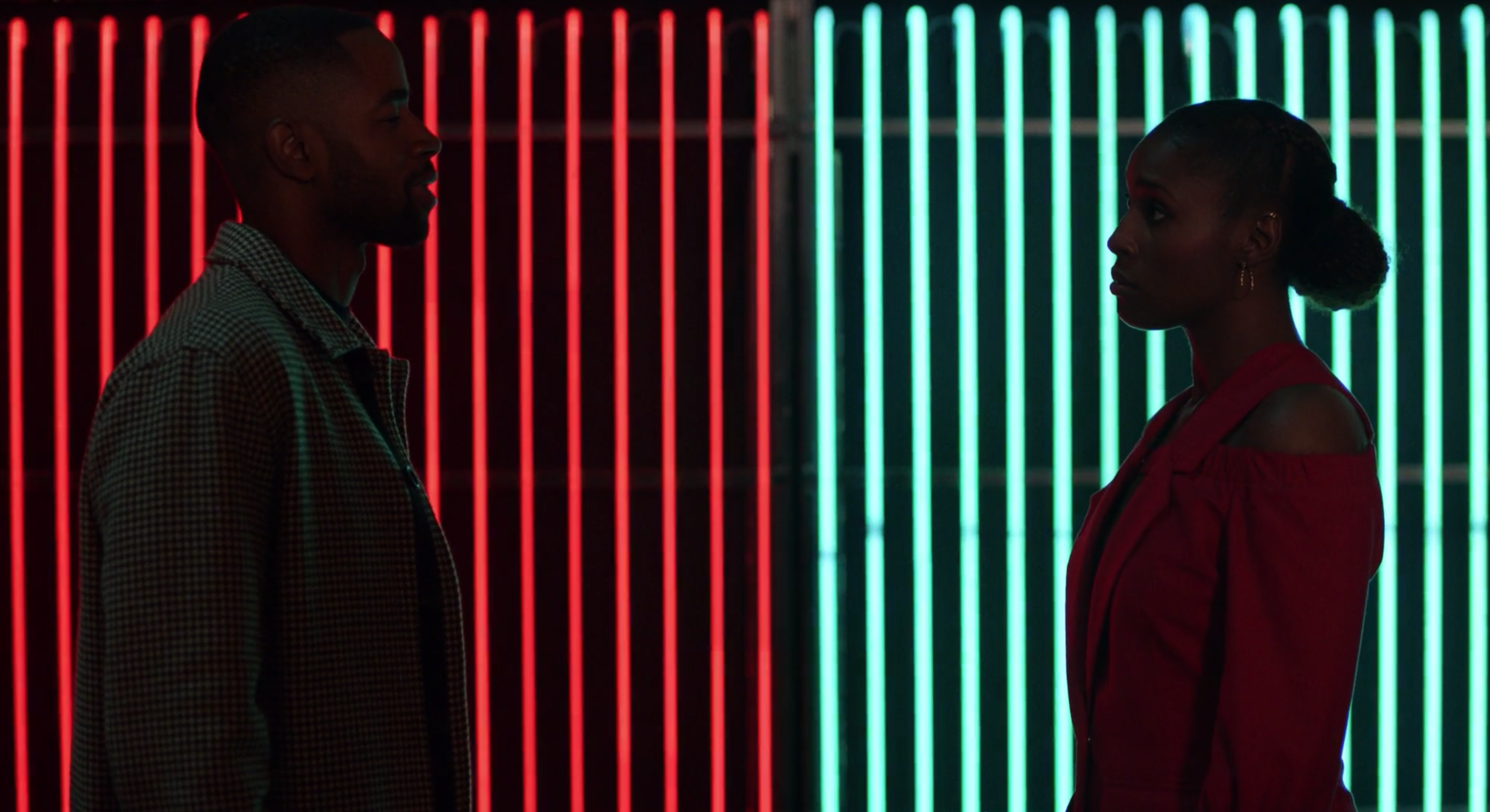 Lawrence’s phone again buzzes with a message from Condola. Issa realizes it’s her and asks about them talking. Lawrence claims that they talk, but he has no idea what’s going on between them. Issa files that in her cabinet. They find out that they’re neighbors as they’re leaving. So they share a Lyft home. Mmmhmm and when they pull up to Lawrence’s, he invites Issa up and we know immediately what’s up. Lawrence is pretending he just wants to show off his apartment, but mmhmm. Them two together! I just need and want it.

Once Issa asked to go to Lawrence’s bathroom, we really knew what was up. You know she went in that bathroom, rapped with Mirror B*tch and got up the nerve to let Lawrence know (sings) “I’m not goingggggg and you and you and you you’re gonna love meeeee!”

But then Lawrence remembers that Condola was on ice and goes to call her back. How thoughtful of him! *rolls eyes* She still wants him to come over and she seemingly doesn’t care how late he keeps pushing it back. What is up Condola? What do you want sis? Issa finds out that it’s Condola on the phone again and you know she made up in her mind that she was not about to let Condola get her hands on her man that night, especially after they had such a great night. Issa made sure she was the one waking up with Lawrence that next morning.

“What if I wanted to stay?” Issa asked.

And then the goose bumpiest moment of the whole episode happened:

“I’M NOT READY FOR THE NIGHT TO END YET,” Issa said.

“TONIGHT MADE ME HAPPY,” Lawrence said.

“YOU MAKE ME HAPPY,” Issa was ready to lay it all on the table, literally.

I am screaming. My screams are screaming! Lawrence and Issa together foreverrrr! It’s a yes for me. 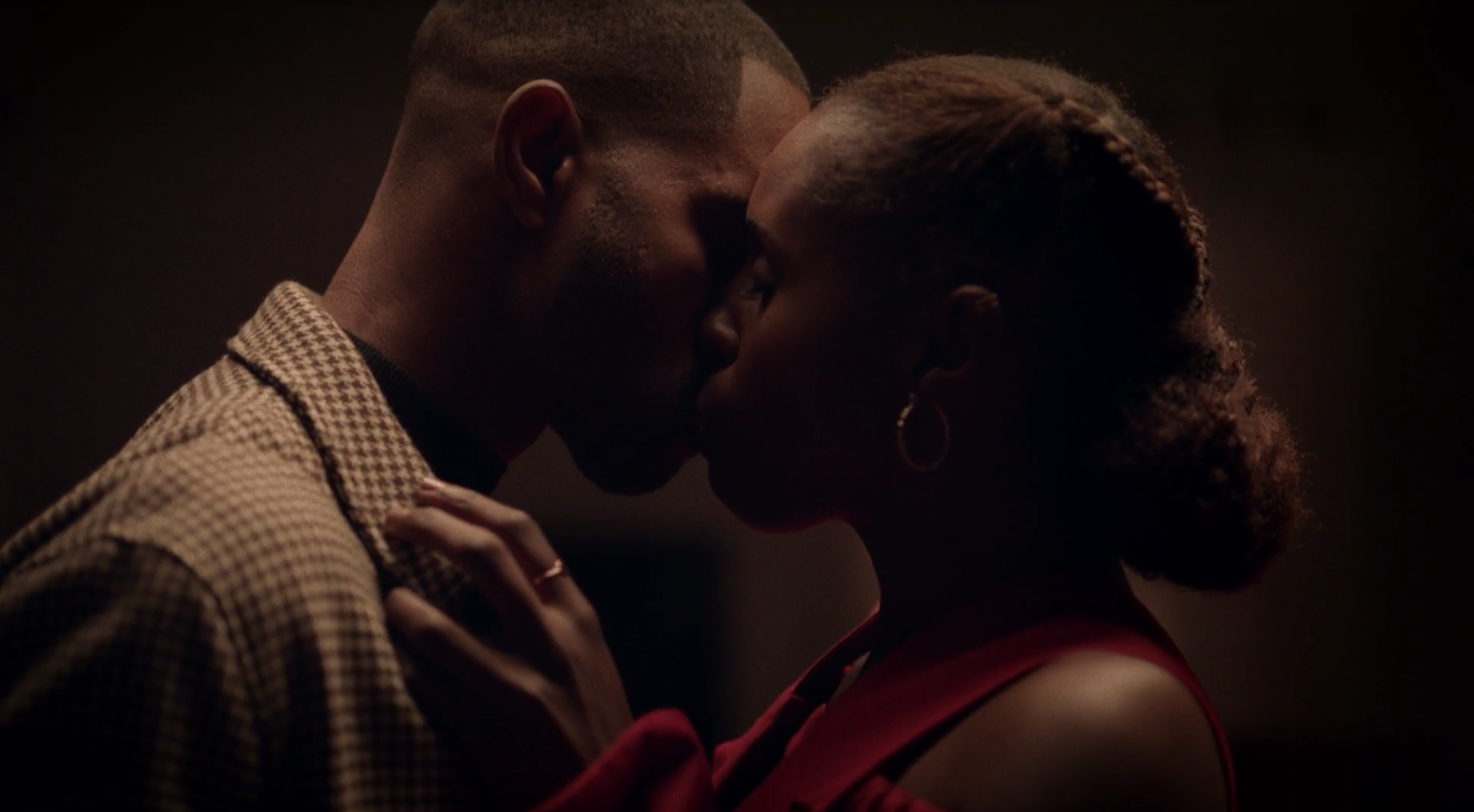 And then they finally kissed again, for the first time in a long time, a real Lawrence and Issa kiss. Lord, this love is so sweet and swoon-worthy, but the messiness that’s bubbling up behind the scenes with Condola is bound to slap them all in the face. But for tonight, let’s just enjoy Lawrence and Issa’s love.

Condola, I like you and all, but sis consider that territory markedt, with a t at the end.

That smile on Lawrence’s face that next morning when he turned over to Issa said it all. *sigh* There was nothing shameful about Issa’s walk home. She knew she put it on Lawrence and Condola was going to the last thing on his mind that day. But the fact that Issa bounced and walked happily home in heels…Lawrence put it right back on her!

These two are either stepping into dangerous ground or the promised land. Can’t wait to see which it’s gonna be!