‘Insecure’ episode 7 recap: Molly doesn’t unpack her oversized baggage and it bursts at the seams

On this Molly-centered episode, a perfect baecation is ruined by Molly’s unpacked baggage and misdirected anger, however through it all, Andrew proves to be her rock.

The last episode dropped us off with an avoided encounter between Issa and Molly. Issa pulled up to her favorite Ethiopian spot for some takeout and Molly was perched at the counter, doing the exact same thing. You know, because besties and old habits die hard.

From Issa’s point of view, we saw that she saw Molly and decided not to go in. In this episode, we see that Molly sees Issa approaching the restaurant and she braces herself for impact. But by the time she looks over, Issa is rushing to get back into her car. Molly has to be devastated to know that Issa would rather avoid her and eating dinner, than talk.

When Molly gets home, to our delicious Asian Bae (who has earned the right to be called by his name), Andrew was on the phone speaking in his native tongue! We love to hear it! Sidebar, the man who plays Andrew, Alexander Hodge is Australian. Could you imagine if his character was also Australian? Wow.

“That b*tch ran away from me like I was an actual job!” Whoa. Way harsh Molly! It was as if she thought of that joke as soon as Issa ran away from her at the restaurant. She couldn’t wait to throw that shade towards her best friend formerly known as Issa, when she got back home to Andrew.

Another side note, we love a cardigan as a dress and yes to Molly’s Mary J. Blige boots. Molly might be tripping as a friend, but she’s giving 10s across the board with her fashions…and that wet and wavy.

Molly’s packing for a baecation with Andrew, where she’ll meet his brother and sister-in-law. Fun, but like, also not. She has to run into work for a quick meeting before their flight and ends up snapping on her assistant. “You don’t get paid to make me look dumb,” Molly said. We all felt the sting and knew immediately that her anger at Issa was still festering and had started to boil over. And when that happens, who knows who’s going to be on the receiving end of that? 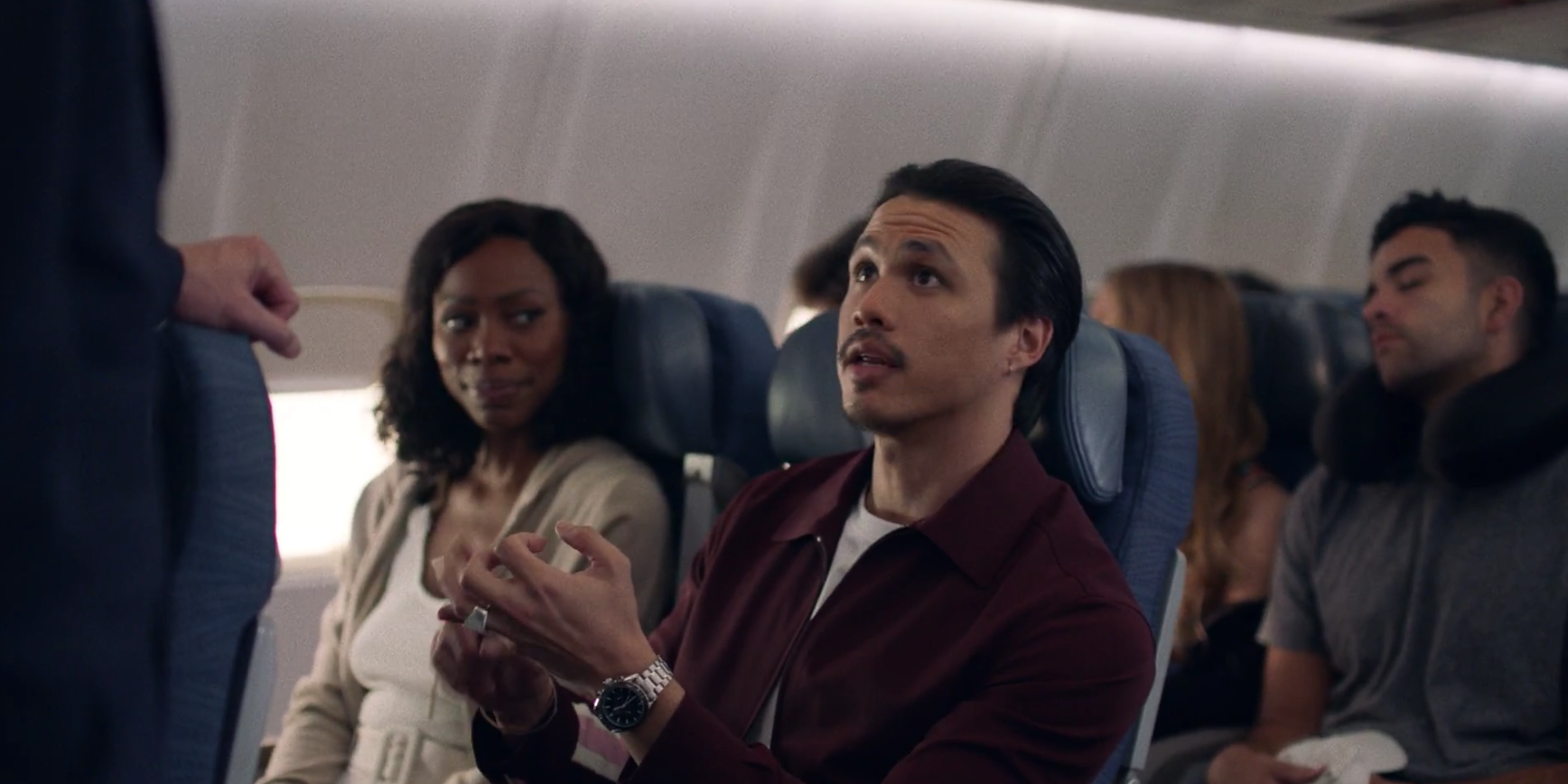 Aww, remember flights? Andrew is too cute with his distinction of Economy plus. We can all agree, yes give us all the plusses–every single thing we’re supposed to have. Honestly, it’s a way of life. Andrew is getting more and more plusses from Molly for sure!

Want to know how you’re in the honeymoon phase of your relationship? One minute, you can be trying to avoid small talk with a very recent divorcee and the next, you’re getting finger popped in Economy plus. Good for you Molly. And now that we’re off the plane, we’re in Mexico. Why is Insecure triggering us so much?! Oh trips. We miss you. Signed, everyone.

There’s nothing quite as sweet as being called “the” by your boo’s family members; like, “Oh that’s ‘the’ Molly?” Molly has to feel good about that one. For as long as we’ve gotten to know Molly, we’ve known a woman who wants love so urgently and fully, so to the path of something real with Andrew, you know Molly’s pleased with herself about how she’s showing up in that relationship.

Oh great, Andrew’s brother is Action Jackson on vacation with the itinerary. But also the sister-in-law is doing a lot around Molly’s physique. The pressure is on…or is it? Our favorite “lustbirds,” Molly and Andrew definitely ended up doing their own thing later that night…literally.

They teased one another about bringing something sexy with them and when they made the big reveal, we see that Molly brought some slinky lingerie and Andrew pulled out all the sex toys stops, including booty balls and a “pink butt thing.”

OOH OK ANDREW! He said, “I’mma be a freak until the day until the dawn!” And they surely “pumped pumped” until the early morning. Their love-making made them a bit late for the hike the next day with brother and sister-in-law, but it was worth it. Our boy went the fearless route and it made Molly feel vanilla, but in typical Andrew fashion, he made sure Molly felt good in a moment she was ready to feel like she wasn’t enough. “You know what’s sexy is finding out what you’re really into,” Andrew said before pulling Molly into him for a kiss. 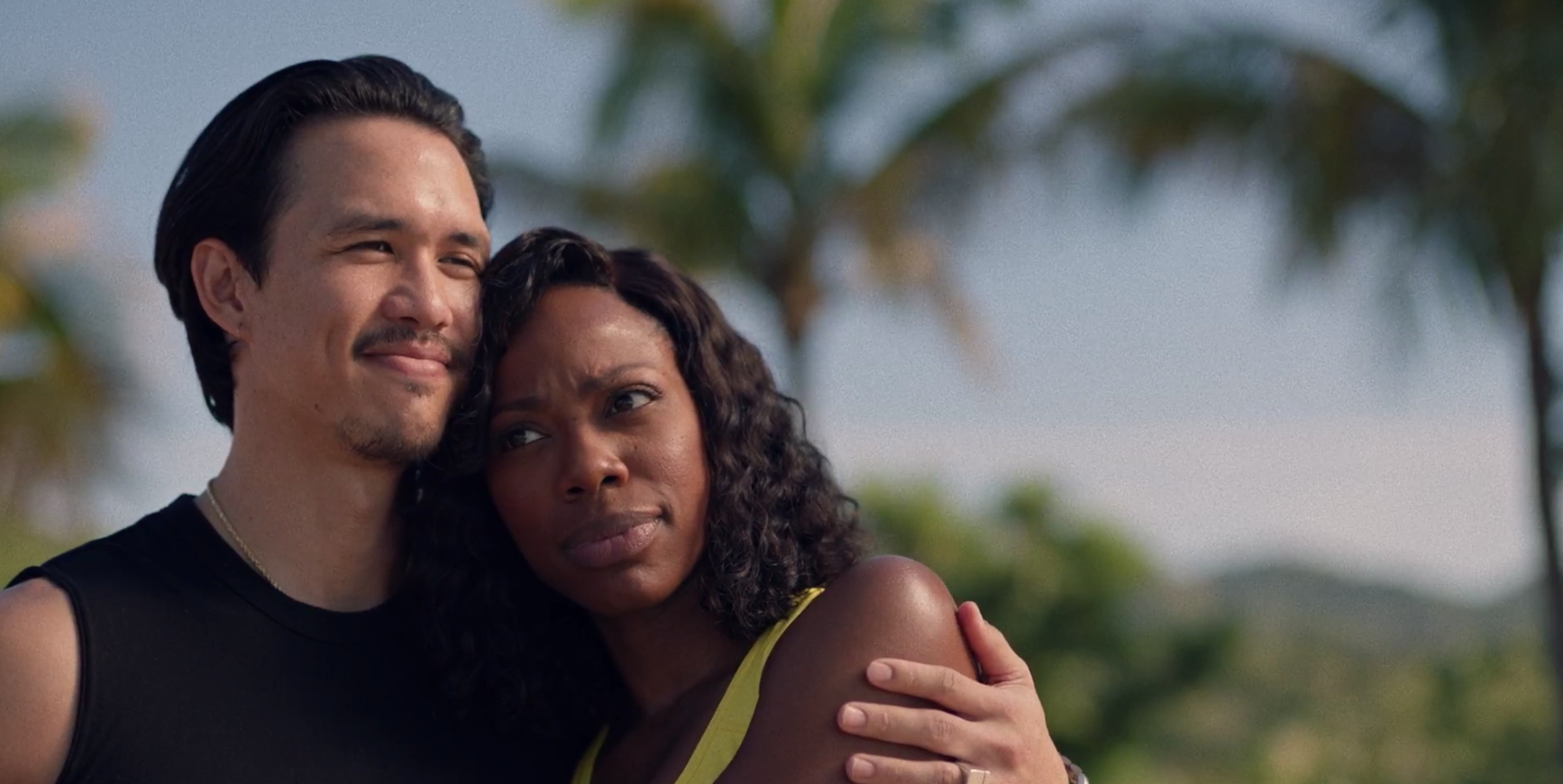 Molly’s wet and wavy looks great. So does her cute little workout Nike fit. And can we just say yes for Molly for trying new things and making memories with bae. OMG the feels of it all. It’s very special to be able to share adventurous memories with someone you have feelings for. It’s the building blocks of a memorable relationship. We see you Andrew! But do we have to run the 3 miles to the top? Side note, Kim Fields must have said no to zip lining because she was definitely jogging down the trail.

Later that night while Molly and Andrew are chilling in the room, Andrew realizes that he’s missed a few calls from Nathan. He called Nathan back and quickly realized that Issa was with him. Molly was immediately intrigued and irritated. But why was Molly mad that Issa was with Nathan again? Molly brought more shade towards Issa when she told Andrew that Issa is messy and she sarcastically added, “So what? Now it’s just Groundhog’s Day?” It’s almost as if Molly’s never had an issue or something happen with someone she was dating and gave him a second chance or even needed one herself. She also acts as if she holds the key to Issa’s relationships.

It was the end of last season when Nathan and Molly had a run-in and Nathan had flowers for Issa. He was coming to explain to Issa why he ghosted her and Molly took that opportunity away from him and the option away from Issa. Molly is stuck on being against Nathan. And Issa, tbh.

READ MORE: #SelfCareSunday: Why giving yourself space is so important after a friendship ends

But here comes Andrew being the bae that he is and he explains to Molly that when Nathan ghosted, he was dealing with “mental health stuff.” Andrew is the perspective that Molly needs. He softens her and gets her to open her mind to a new way of thinking that doesn’t automatically make her right all the time. It feels like, right now, Molly is only seeing Issa through a murky lens–as if everything she does is bad. When you’ve stopped being able to see the good in a person, it may be safe to say that friendship has sailed.

Oh the hot and sexy portion of the relationship in the beginning. Everything leads to sex. Molly pulls out her lingerie and tells our bae to “eat this *ss.” OK MOLLY! Get yours sis! What we think is going to be a chill day in the pool, turns into a Molly day in the pool. Molly’s so on edge, she doesn’t know she’s on edge/ an unfortunate interaction with towel lady at the pool over her not having a key card made Molly big mad because her experience of the incident was racist. She got back to Andrew upset and when he asked, Molly shared that she was fine, but it was a racist incident. 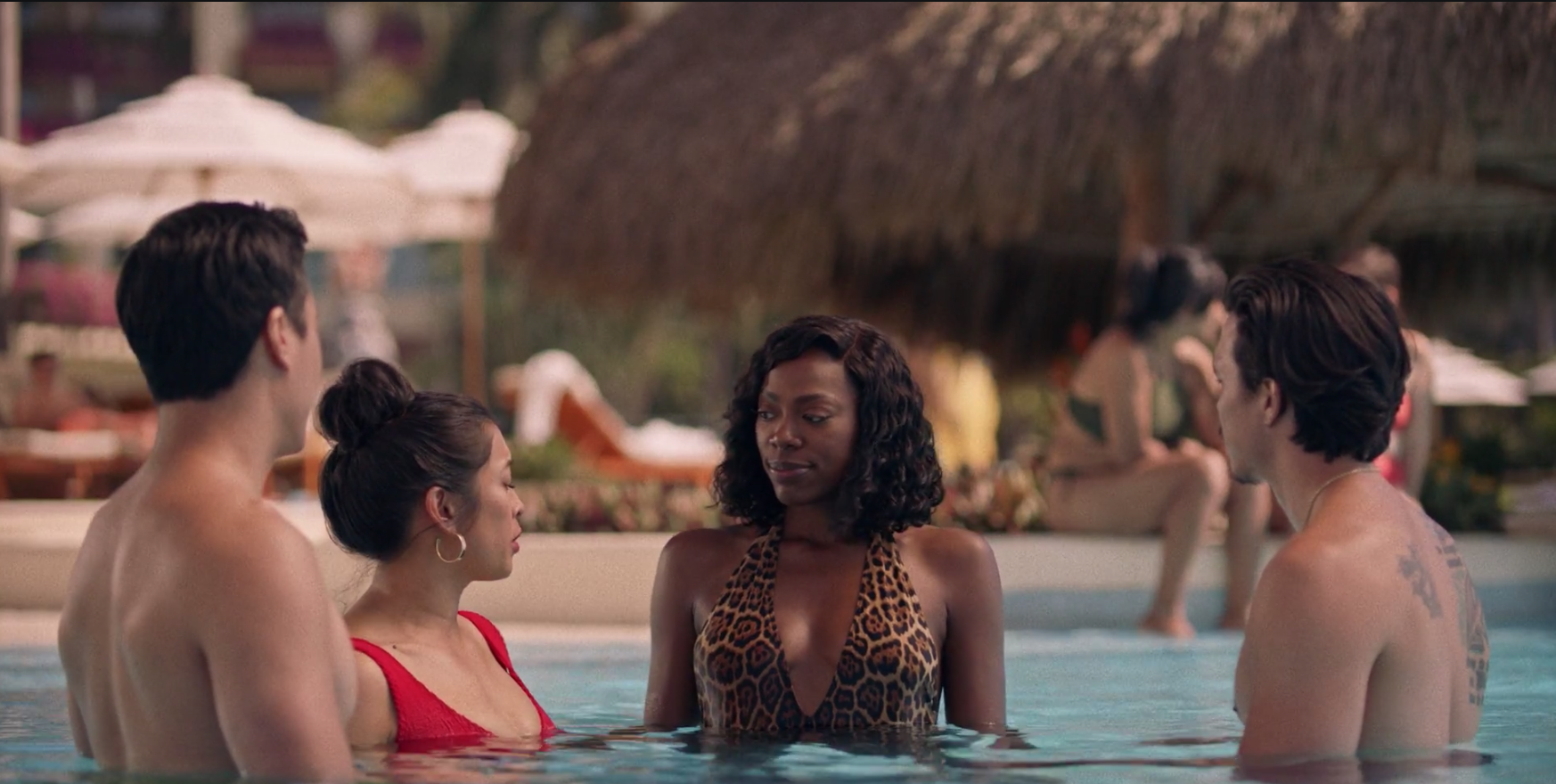 Claiming to play “devil’s advocate,” Andrew’s brother said that he didn’t believe it was about race and told Molly that she “could be making your life harder by assuming.” And when Andrew speaks up for Molly to his brother, he does so in Chinese, to which Molly suggests they speak English because she doesn’t speak their language. Molly tells him that he doesn’t get it and he tells her that she gives it too much power. “You got to know when to pick your battles,” Andrew’s brother said to Molly.

Oh no he didn’t! Molly accused them, like all of them–sister-in-law, brother and Andrew of picking and choosing “people of color” when it benefits them. When Andrew questioned what Molly said, “That’s not true. I don’t think like that,” she told him that he’s different. Andrew’s brother made a point of saying that Molly is picking and choosing who gets the benefit of the doubt. Molly was done after that. Brother was ready to debate and Molly was ready for blood.

“Andrew, get your fucking brother!” Molly screamed at a low pitch, between her teeth.

At the end of the day, Andrew had to straddle the fence between his brother and his girl. He followed Molly out of the pool, but their sleepless night wasn’t quite the honeymoon makeup sex we expected. The next morning, Andrew ditched his brother and sister-in-law and to let Molly sleep in and to spend time with only her. He even brought her a smoothie. Andrew is just…swoon. Clearly, Molly is still hung all up in her feelings. She only knows 0-100 and nothing in between. “Did I f*ck things up?” Molly asked. She didn’t. Andrew spoke to his brother and everything is fine. He apologized. Andrew made a good point, saying his brother could be an *sshole at times, but that’s his brother, so they don’t let anything like that stick. They work it out.

Again, Andrew is bringing Molly a new way of thinking. Andrew helps her to see she shouldn’t let it fester. She can easily apply this advice to her relationship with Issa and how she festers in negativity there. Her baggage has gotten too heavy. She’s not able to control when she snaps.

Yes, Molly with the action of calling Dr. Rhonda immediately and not even waiting to when baecation is over. We love to see it. Letting go is one of Molly’s recurring problems and the first step is realizing there is a problem. Good for Molly. We are making progress. In the words of our good sis, Kelli, “You know what that’s called? Growth.”