J.R. Smith beats up man who he claims damaged his truck

Athlete took to social media to share his account of the beat down, 'This ain’t no hate crime' 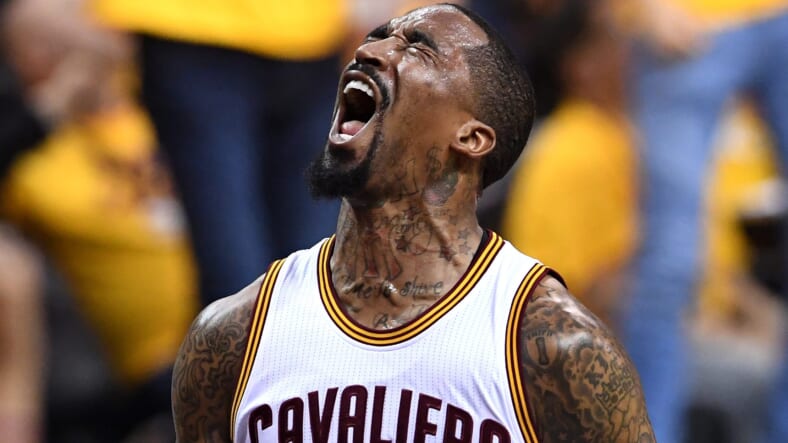 J.R. Smith #5 of the Cleveland Cavaliers reacts after a play in the first quarter against the Toronto Raptors in game five of the Eastern Conference Finals during the 2016 NBA Playoffs. (Photo by Jason Miller/Getty Images)

J.R. Smith of the Cleveland Cavaliers was captured on video this weekend beating up a man who allegedly damaged his truck during protests in Los Angeles.

Smith was parked in a residential area, away from protesting, when the man broke the window of his truck. In the video, Smith is seen delivering a few kicks and blows to the head of the man before his friends step in.

Smith took to social media to give his account of the incident before other news outlets reported. He said on Instagram Live, “One of the motherfu**king white boys didn’t know where he was going and broke my f**king window in my truck,” Smith said, “I chased him down and whupped his a**.”

The disclaimer was posted likely because the young man who Smith beat up was white.

Currently a free agent, Smith has reportedly re-signed with the Cleveland Cavaliers and will return to his former team when the NBA starts playing again.

Smith’s former teammate, LeBron James, has been active on social media also. However, the NBA All-Star has been writing about the protests.

Throughout his career, James has always been active in speaking out against police brutality. He recently retweeted a post from Jimmy Kimmel which, he said, left him in tears. “I’m so hurtful for my people right this moment.”

The ending has me in tears!!! Literally ??????. This isn’t ok the way we’re treated man! I’m so hurtful for my people right this moment https://t.co/fF0HS6qmed

NBA legend, Michael Jordan, released a statement on Sunday condemning police violence. In a rare political stance, Jordan said, “I am deeply saddened, truly pained, and plain angry,” the statement reads, “I stand with those who are calling out ingrained racism and violence toward people of color in our country. We have had enough.”