Man who pointed bow and arrow at protesters now behind bars 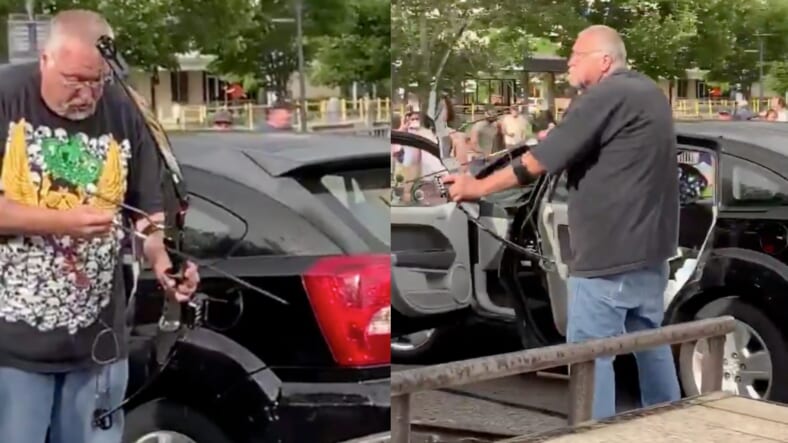 The white man seen on video aiming a bow and arrow at demonstrators at Saturday’s protest in Utah has been slapped with two felony weapons counts and one count of aggravated assault.

Brandon E. McCormick, 57, showed up armed and ready to confront unruly demonstrators over the death of George Floyd. But he caught a swift beat down from a group of protestors when he threatened them with a bow and arrow. The crowd also responded by flipping his car, and the vehicle was burned.

The shocking scene was captured on video that was widely spread across social media.

As previously reported by theGrio.com, McCormick was detained by police for aiming the weapon and declaring “All Lives Matter.”

White man in Salt Lake City, Utah yells “All Lives Matter” and then shoots bow and arrow into crowd of peaceful protesters. pic.twitter.com/b4j2Sad4ju

“Yes, I’m American. All Lives Matter,” he responds to someone in the crowd.

Video footage of the shocking Salt Lake City incident shows McCormick standing in the street beside his vehicle as he prepares to use his bow and arrow apparently on a protester.

He also reportedly had a large knife in his possession.

After he was pummeled by protesters, a bloodied McCormick later spoke to local media. “First I got beat up when I yelled, ‘All Lives Matter,’ then I pulled out weapons, then I got beat up some more, then cops grabbed me and my car got totaled,” he said.

McCormick alleged that two Black men beat him “through my open window” before he got out and retrieved his bow and arrow. He also claimed his car was set on fire. None of his accounts have been verified.

The Taylorsville man said he attended the protest to protect police, according to the Salt Lake Tribune. McCormick was previously convicted of battery against a public safety officer. He also spent nearly two decades behind bars in California, the report states.

The three charges he is facing are Utah’s lowest grade of felony.