The 800-pound stone was pulled from the ground at a Fredericksburg street corner early Friday. 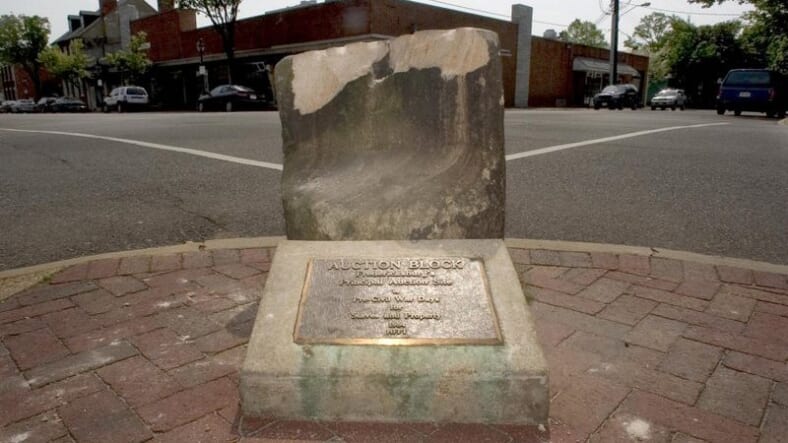 This May 5, 2005, file photo, shows the historic pre-civil war auction block for slaves and property at the corner of Charles and William Streets in downtown Fredericksburg, Va. (Reza A Marvashti/The Free Lance-Star via AP, File)

FREDERICKSBURG, Va. (AP) — A 176-year-old slave auction block has been removed from a Virginia city’s downtown.

The 800-pound (363-kilogram) stone was pulled from the ground at a Fredericksburg street corner early Friday after the removal was delayed for months by lawsuits and the coronavirus pandemic, The Free Lance-Star reported.

The weathered stone was sprayed with graffiti twice and chants of “move the block” erupted this week during local demonstrations over the death of George Floyd in Minneapolis, city officials said in a statement announcing the removal.

The protests were part of a nationwide movement that was sparked by the death of Floyd, a handcuffed black man who died after a police officer pressed his knee into his neck as he pleaded for air.

A local chapter of the NAACP called for the stone’s removal in 2017, saying it was a relic of “a time of hatred and degradation” that was allowed to be displayed at a main thoroughfare in the city.

In 2019, the City Council voted in favor of its removal and relocation to the Fredericksburg Area Museum, and a judge upheld that decision in February after two businesses near the auction block sued to stop the relocation.

The process was held up after one of the businesses, a commercial building owner, asked the Virginia Supreme Court to bar the removal while her decision was being appealed, the newspaper said.

The museum now plans to display the knee-high stone in an exhibit chronicling the “movement from slavery to accomplishments by the local African American community,” the Free Lance-Star said. The staff also plans to feature the recent protests in the exhibit, according to the museum’s president and CEO.