In the shadow of George Floyd's death, the Republican politcian breaks from his party and publicly marches to bring awareness to discrimination 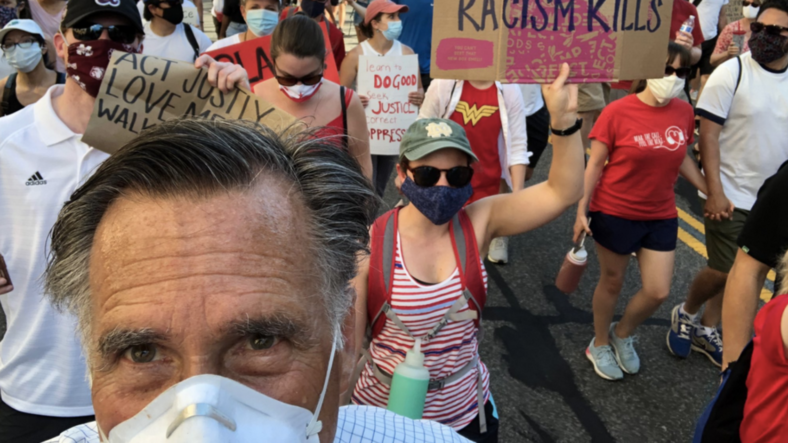 Sen. Mitt Romney joined demonstrators in the nation’s capital on Sunday in a protest against police brutality on Black Americans.

Romney is reportedly the first Republican senator to take to the streets in Washington D.C. to support the voices decrying race relations in the U.S.

Romney, who represents Utah, shared a photo on Twitter showing him wearing a mask as he walked with a group of nearly 1,000 Christian protesters in Washington. He captioned the image: Black Lives Matter.

Outraged conservatives lit up the comments to slam the senator for taking a stance against racism, with some writing “All Lives Matter.”

One user wrote, “This is Mitt Romney scratching & clawing in his attempt to be relevant.”

“We need a voice against racism, we need many voices against racism and against brutality,” Romney told NBC News.  “We need to stand up and say, ‘Black Lives Matter.’”

He shared the same thing with the Washington Post, saying he marched “to make sure that people understand that Black Lives Matter.” On Saturday, Romney shared his support for the movement in an emotional tweet about his father.

This is my father, George Romney, participating in a Civil Rights march in the Detroit suburbs during the late 1960s—“Force alone will not eliminate riots,” he said. “We must eliminate the problems from which they stem.” pic.twitter.com/SzrcAyfPD8

“This is my father, George Romney, participating in a Civil Rights march in the Detroit suburbs during the late 1960s,” Romney wrote. “Force alone will not eliminate riots. We must eliminate the problems from which they stem.”

Like most people in America, Mitt Romney has had George Floyd on his mind since Memorial Day. On March 28th, he posted to Twitter:

No Americans should fear enmity and harm from those sworn to protect us. The death of George Floyd must not be in vain: Our shock and outrage must grow into collective determination to extinguish forever such racist abuse.

The George Floyd murder is abhorrent. Peaceful protests underscore the urgency of addressing injustices. But violence drowns the message of the protestors and mocks the principles of justice.

Amid the ongoing civil unrest over the death of George Floyd, Minneapolis officials announced on Sunday plans to disband the police after former officer Derek Chauvin and three other cops were charged in relation to Floyd’s death.