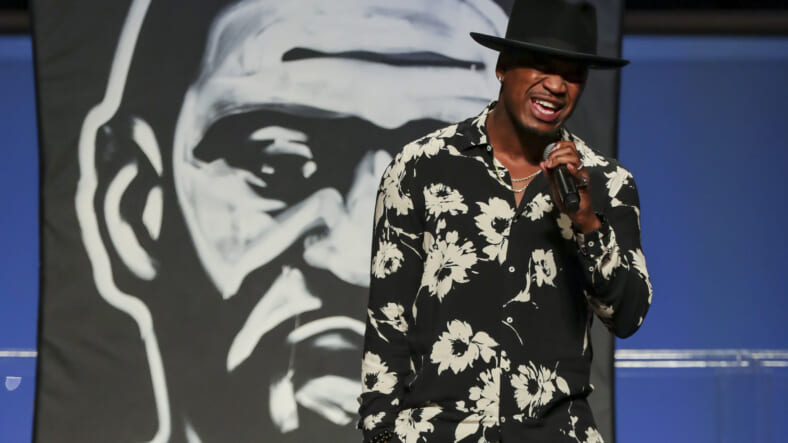 Singer Ne-Yo performs a song during the funeral for George Floyd at The Fountain of Praise church on June 9, 2020 in Houston, Texas. (Photo by Godofredo A. Vásquez - Pool/Getty Images)

While many were touched by Ne-Yo’s emotional a cappella rendition of “It’s So Hard to Say Goodbye to Yesterday” during George Floyd’s funeral this week, some of his comments during the ceremony have sparked backlash.

According to Yahoo, Tuesday, the singer-songwriter spoke during the funeral service held at the Fountain of Praise Church in Floyd’s hometown of Houston.

“Fifty states are protesting at the same time. This man changed the world — changed the world for the better. So, I just want to personally thank George Floyd for his sacrifice, so that my kids can be all right later on. I appreciate the sacrifice, my brother, I genuinely do,” he said, explaining how the death of the 46-year-old Black man sparked national protests that have created a global discussion about police brutality and systemic oppression.

Following these statements, the World of Dance judge sang the 1991 Boyz II Men song that has now become a staple for mourners. While his singing was praised, viewers on social media quickly took issue with his choice of words.

The part that fans took issue with was the insinuation that Floyd had made a willful “sacrifice,” to help spark a movement, when in reality he was brutalized and killed by Minneapolis police despite pleas for mercy.

While the father of four’s intentions were probably in the right place, naysayers found his choice of words both inappropriate and tone-deaf.

“Ne-Yo thanked #GeorgeFloyd for his sacrifice. Whose going to tell NeYo what really happened?” wrote one follower.

“I just saw why ne-yo was trending. Smh murder is not a sacrifice,” chimed in another.

When one of the entertainer’s Instagram followers commented on his video of his performance by saying, “Murder is not a sacrifice,” he responded.

“But the sacrifice of his life was the spark that was apparently needed to create the energy for change,” he continued. “It’s sad that it took this kind of sacrifice to finally open America’s eyes even the little bit we have. But the unfortunate truth is the world has not united like this in the name of justice for black people EVER. I’m addressing this comment because ignorance divides and we don’t need that right now.”