Some of the movies listed include 'When They See Us,' 'School Daze,' '13th' and 'Moonlight.' 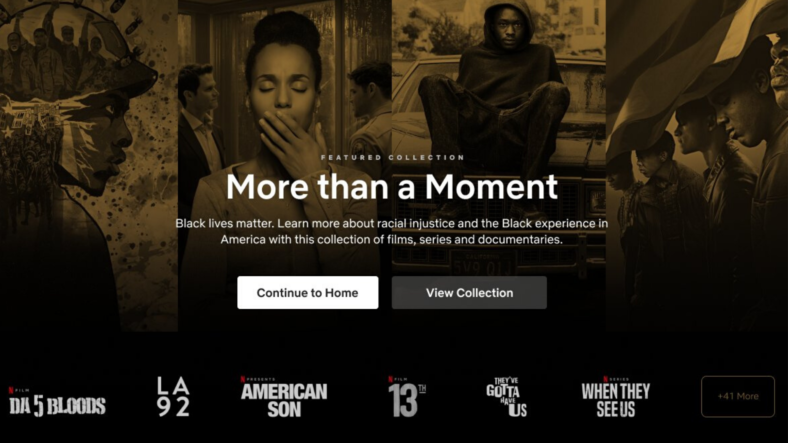 As protests continue in the wake of the deaths of George Floyd, Brionna Taylor and Ahmaud Arbery, many corporations are making statements, public donations, and introducing permanent or temporary changes in support of the movement.

“To be silent is to be complicit. Black lives matter. We have a platform, and we have a duty to our Black members, employees, creators and talent to speak up.”

That tweet, shared on May 30, was followed by temporary silence, however. The brand, who typically tweets or retweets once or twice every few days, did not share any posts to its timeline until the announcement on Wednesday, June 10.

“When we say ‘Black Lives Matter,’ we also mean ‘Black storytelling matters,'” the entertainment company tweeted on Wednesday, introducing their new category. “With an understanding that our commitment to true, systemic change will take time – we’re starting by highlighting powerful and complex narratives about the Black experience.”

When you log onto Netflix today, you will see a carefully curated list of titles that only begin to tell the complex and layered stories about racial injustice and Blackness in America. https://t.co/dN6XQmsrGK pic.twitter.com/3CIrrno6mw

The Black Lives Matter section of the streaming giant lists over 45 titles of both fictional and non-fiction stories of Black triumph, tragedy, and all-around excellence. Some of the films highlighted include Moonlight (2016), Miss Virginia (2019), and School Daze (1988).

Documentaries and series highlighting criminal justice reform and social justice issues are also on the forefront. When They See Us (2019), 13th (2016), and Time: The Kalief Browder Story (2017) are all listed in the first row.

Other popular documentaries, such as Homecoming: A Film By Beyoncé (2019), and Becoming (2020), also made Netflix’s suggested viewing list.

Their bio on their Twitter account now reads “Black Lives Matter. Black Stories Matter,” and encourages all to follow their brand Strong Black Leads, the division which focuses on Black content year-round. All media presented in the capsule collection can be found here.