The film follows four African-American veterans as they return to Vietnam and battle the forces of man and nature, seeking the remains of their fallen squad leader. 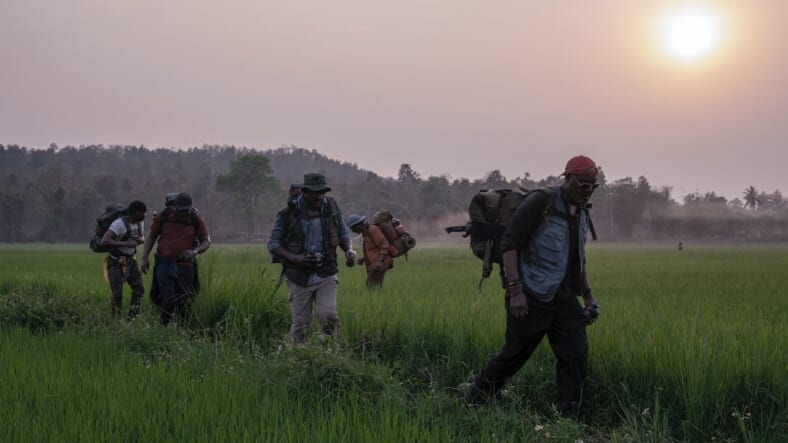 In it, four African-American veterans battle the forces of man and nature when they return to Vietnam seeking the remains of their fallen squad leader and the gold fortune he helped them hide.

From Academy Award® Winner Spike Lee comes a New Joint: the story of four African-American Vets — Paul (Delroy Lindo), Otis (Clarke Peters), Eddie (Norm Lewis), and Melvin (Isiah Whitlock, Jr.) — who return to Vietnam. Searching for the remains of their fallen Squad Leader (Chadwick Boseman) and the promise of buried treasure, our heroes, joined by Paul’s concerned son (Jonathan Majors), battle forces of Man and Nature — while confronted by the lasting ravages of The Immorality of The Vietnam War.

Prior to the coronavirus pandemic, the award-winning filmmaker was named President of the Cannes Film Festival Jury, making him the first Black person to head the panel.

The annual film festival, which was cancelled because of the pandemic, is the largest in the world and brings Hollywood’s elite to the French Riviera each May.

“In this life I have lived … my biggest blessings have been when they arrived unexpected, when they happened out of nowhere. When I got the call that I was offered the opportunity to be President of Cannes Jury for 2020, I was shocked, happy, surprised and proud all at the same time,” Lee said in a statement.

“To me the Cannes Film Festival (besides being the most important film festival in the world — no disrespect to anybody) has had a great impact on my film career,” he continued. “You could easily say Cannes changed the trajectory of who I became in world cinema.”