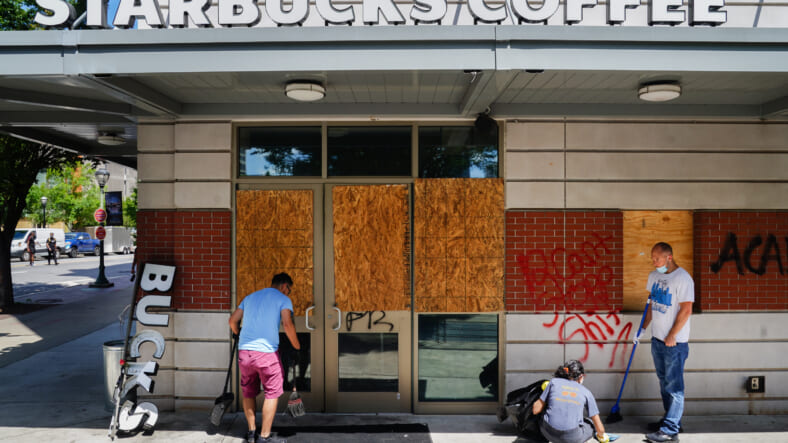 Damage is seen to a Starbucks following an overnight demonstration over the Minneapolis death of George Floyd in Atlanta, Georgia. (Photo by Elijah Nouvelage/Getty Images)

This week Starbucks sparked public outrage after it was reported that an internal memo was sent out banning employees banning from wearing accessories or clothing that shows support for the Black Lives Matter movement. Now the coffee giant seems to be changing its tune and has issued a response.

Initially, BuzzFeed News reported that they had obtained the memo, which cited the company’s accessories policy that forbids accessories that “advocated a political, religious or personal issue,” as the reason for banning any BLM support gear.

Accompanying the memo was a video from a company executive cautioning employees that this move was for their safety because “agitators who misconstrue the fundamental principles” of BLM could attempt to “amplify divisiveness.”

But employees nationwide called foul on that explanation, pointing out the company permits and sometimes even encourages employees to wear pro-LGBTQ+ pins, especially during Pride Month in June.

“Starbucks LGBTQ+ partners wear LGBTQ+ pins and shirts, that also could incite and create violent experiences amongst partners and customers,” one Black transgender Starbucks employee pointed out to BuzzFeed. “We have partners who experienced harassment and transphobia/homophobia for wearing their pins and shirts, and Starbucks still stands behind them.”

Black Lives Matter. We continue to listen to our partners and communities and their desire to stand for justice together. The Starbucks Black Partner Network co-designed t-shirts with this graphic that will soon be sent to 250,000+ store partners. pic.twitter.com/Wexb45RcTE

While a company spokesperson verified to BuzzFeed that the memo was authentic, once Starbucks saw the negative reaction from the public it very quickly decided to take another approach.

“Black Lives Matter,” began the tweet they sent out Friday. “We continue to listen to our partners and communities and their desire to stand for justice together. The Starbucks Black Partner Network co-designed t-shirts with this graphic that will soon be sent to 250,000+ store partners.”

In addition to creating company-sponsored BLM gear, a follow-up tweet also explained, “In response to this historic time, our store partners can also show support for the Black Lives Matter movement with their own t-shirts, pins and name tags.”

On its site, the coffee chain also addressed the criticism they received in a post titled ‘Standing together against racial injustice.’

“You’ve told us you need a way to express yourself at work, asking: ‘Do you understand how I feel!?’ ‘Do you understand the black community is in pain?’ We see you. We hear you. Black Lives Matter. That is a fact and will never change,” the company conceded.