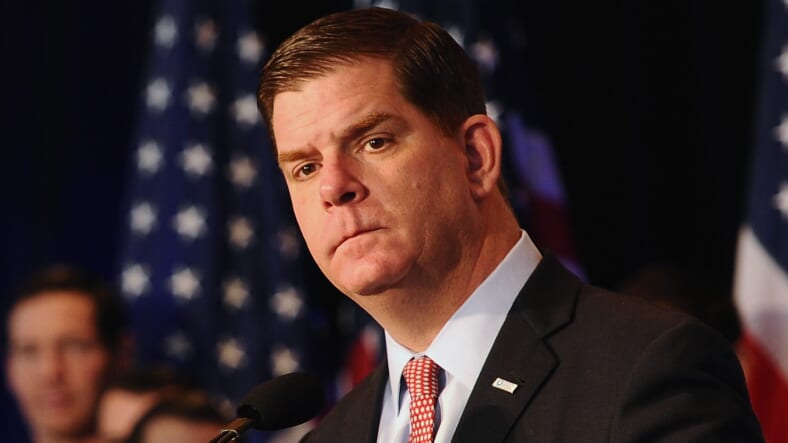 Protester demands to defund the police in the wake of George Floyd‘s killing are yielding some results.

Boston Mayor Marty Walsh became the latest official to issue support for rethinking how the police is funded. The East Coast city has a notorious history of being unwelcoming to Black people.

Declaring racism a public health crisis in the city of Boston via executive order, the Democratic mayor on Friday said he would take steps to shift $12 million, about 20% of the police force’s overtime budget, from the Boston Police Department to various other community programs in need, the Associated Press reports.

Walsh, who is in his second term leading Boston, called racism a “threat to public health and safety” and a “persistent barrier to health equity for all Bostonians.”

With a city population of about 692,600, about one in four Boston residents are Black, according to estimates from the U.S Census Bureau.

As a result, the executive order states that $12 millions of the Boston Police Department’s overtime budget will be redistributed to economic development initiatives, mental health services and housing opportunities in the city.

Specifically, all city departments are partnering with the Boston Public Health Commission and the Mayor’s Office of Health and Human Resources to address “eight key strategies to combat racism as a public health crisis and resulting health inequities.”

Among these strategies include plans to “engage historically marginalized communities in identifying problems and solutions and supporting community-driven responses,” the executive order says.

The executive order also addressed how the COVID-19 pandemic has brought to light many racial disparities in the city. As a result, a “Boston Health Equity Now” plan will be created in partnership with the COVID-19 Health Inquiries Task Force to find “root causes” of such health inequities.

Boston is the latest city to declare racism a public health crisis. The Denver, Indianapolis and Cleveland city councils all did so in May and cities in Maryland and California are in the midst of doing the same, according to People.