EXCLUSIVE: The governor says that he is working with California lawmakers to revamp public safety — but stopped short of advocating for defunding the police 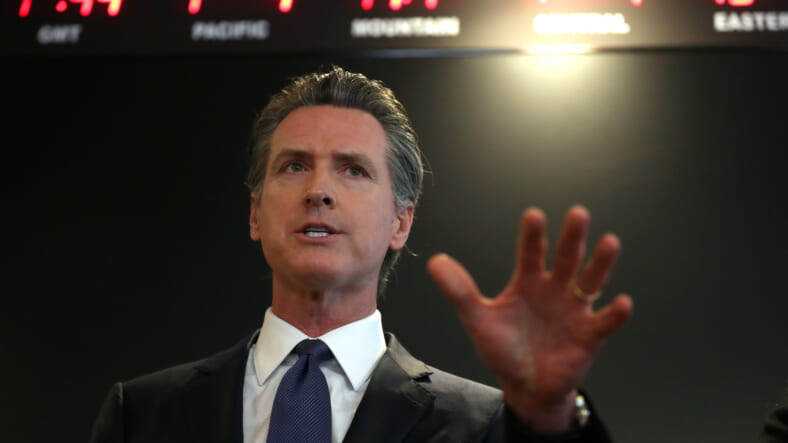 California Gov. Gavin Newsom speaks during a news conference at the California Department of Public Health on February 27, 2020 in Sacramento, California. (Photo by Justin Sullivan/Getty Images)

Governor Gavin Newsom is doubling down on his commitment to social justice reform in the state of California.

In an exclusive interview with theGrio, the first-term governor, 52, revealed that he is working with California lawmakers to revamp public safety—but stopped short of advocating for defunding the police, a growing demand from Black Lives Matter leaders.

“The bottom line is we’re asking the police to do things that they shouldn’t be doing,” Newsom explained on Wednesday. “We’ve asked them to be social workers, we’ve asked them to be addiction specialists, behavioral health specialists. We simply require the police to take on too many roles and responsibilities. I think fundamentally, beginning to pull back and structurally reforming what we are asking of police departments is long overdue.”

Newsom went on to explain that change within law enforcement should include “fundamentally reimagining and reforming” public safety, but not “eliminating law enforcement.”

RELATED: California governor: ‘Black people are not responsible for what’s happening in this country’

“We’ve got to reimagine their role in public safety. The first response to every 9-1-1 call should not be armed police officers coming in to address issues like homelessness, issues like dealing with someone who has severe schizophrenia, paranoia,” he said. “I think foundationally, for me, the call is around fundamentally reimagining and reforming, not eliminating law enforcement. But fundamentally changing its role and pulling them out of every single equation as it relates to public safety.” 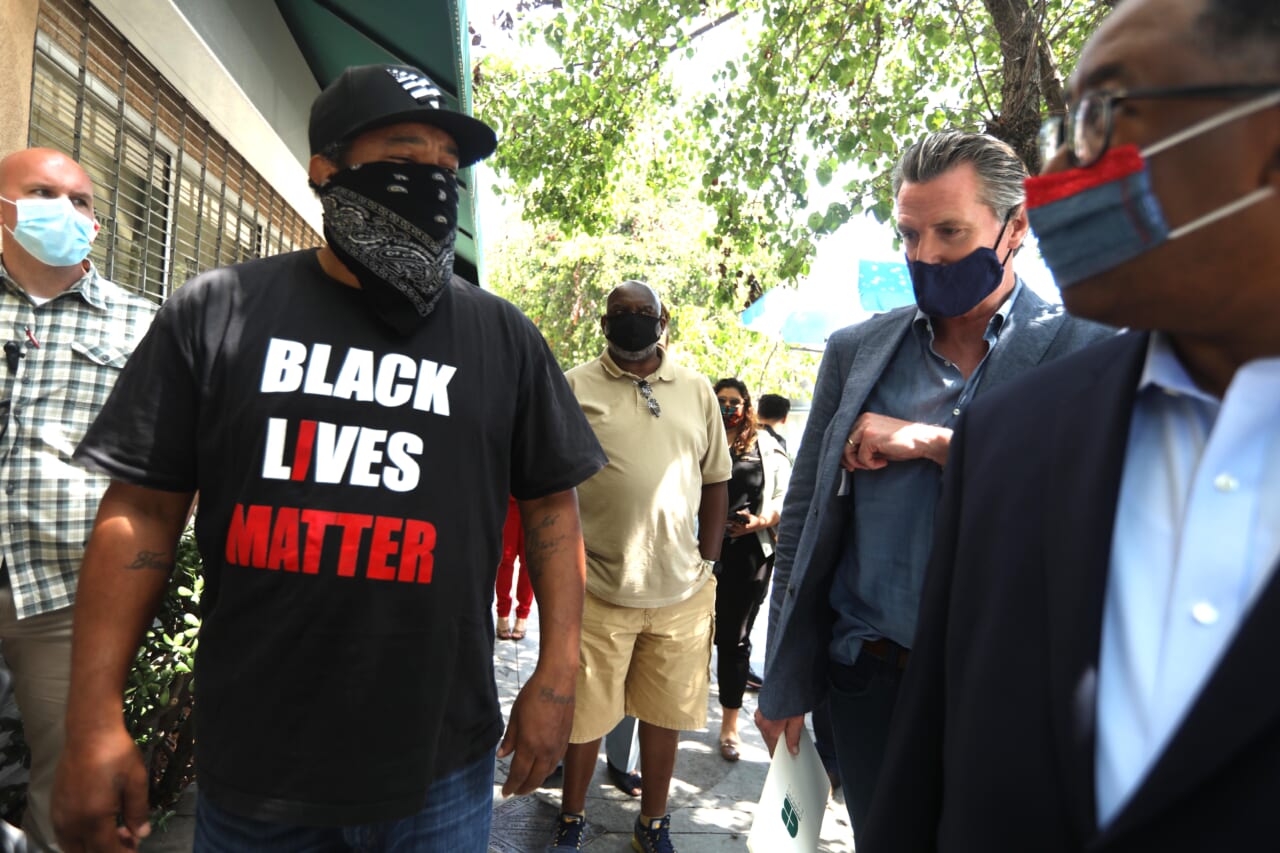 Newsom has already begun to push for reforms within the Golden State, including working toward a statewide standard for policing peaceful protests and ending the carotid hold, a technique that was used in both the deaths of George Floyd and Eric Garner.

The former mayor of San Francisco knows, however, that laws are not enough to dismantle systemic racism within the police force.

“I’m proud that California has led the nation with the toughest deadly use of force rules, but just passing a law doesn’t necessarily solve a problem,” Newsom said. “The most important thing we can do is apply the kind of cultural reforms that are necessary, not just legal reforms—though legal reforms are a must, certainly from a national perspective. But in California, we’re very proud of the leadership in that space. Dr. Shirley Weber and the [California Legislative] Black Caucus leading that effort last year.”

Assemblywoman Weber, a Democrat, and other members of the caucus pushed for Assembly Bill 392, also known as the “Stephon Clark Law,” a landmark bill that curbs the use of deadly force.

The law, named after an unarmed Black man who was fatally shot by Sacramento police in his grandmother’s backyard, was signed into law by Newsom in 2019.

“We have a law on the books that requires people that are experiencing or witnessing excessive force, they have a duty to report it,” the governor told theGrio. “They have a duty to deescalate, they have a duty to address the medical needs of people they come in contact with. That law was passed, but it hasn’t gone into effect and will not go into effect until January 2021. We’re looking to see if we can move up the provisions of that law with the kind of urgency that this moment is required.” 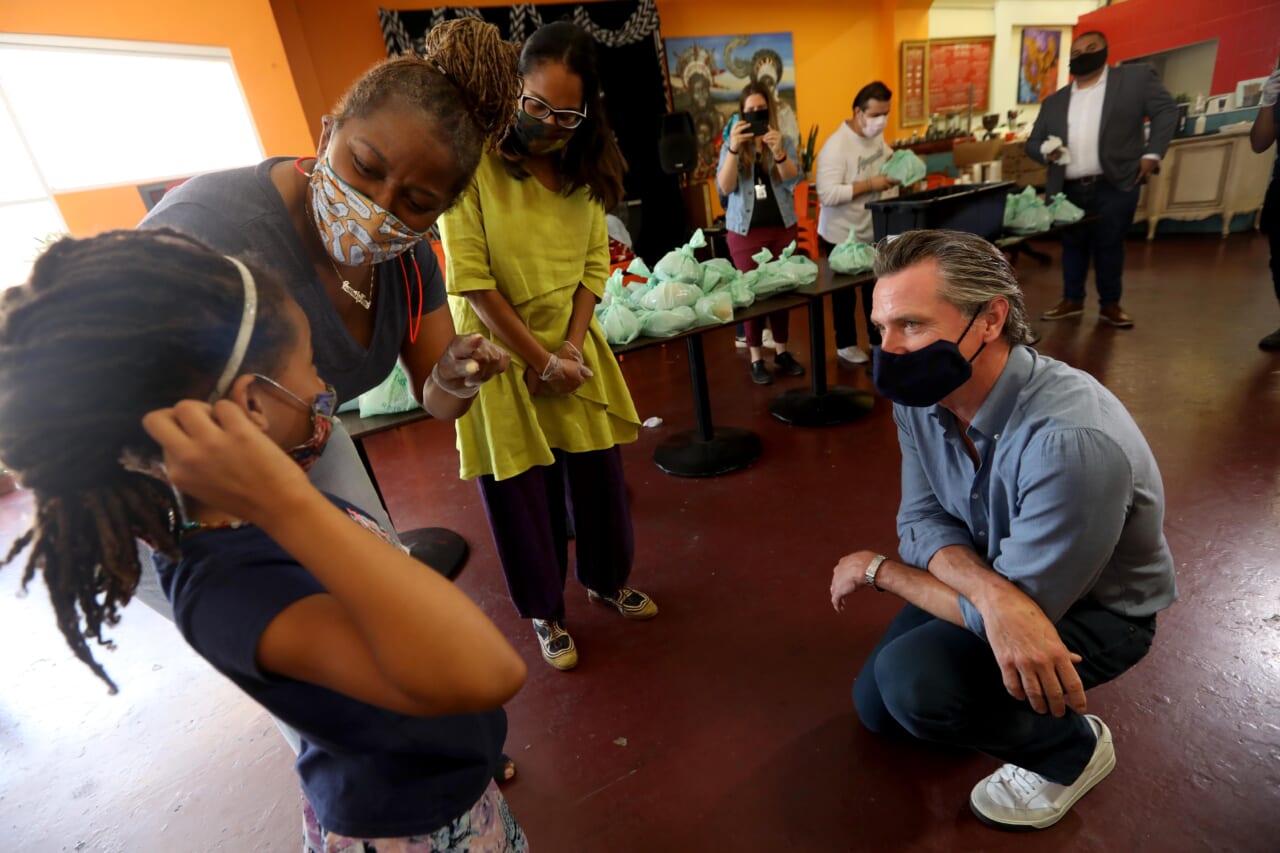 California Governor Gavin Newsom, right, listens as he is introduced to Kirikou Muldrow, 8, by California Senator Holly Mitchell and California Assembly Member Sydney Kamlager-Dove, right, during a visit to the Hot and Cool Cafe in Leimert Park after several days of protest in Los Angeles on June 3, 2020. (Genaro Molina / Los Angeles Times via Getty Images)

Newsom is not only addressing police brutality, but also the prison industrial complex and the criminalization of Black and brown youths in the state of California. The governor is pushing for the elimination of the California Division of Juvenile Justice, a faction of the California Department of Corrections that provides “education and treatment” for the state’s most serious youth offenders, according to its website.

The department has been heavily criticized by activists for its use of force and the disproportionately harsh sentencing of Black children. Black youths in California are 9.3 times more likely to be detained or committed to a juvenile facility compared to white youths, according to data from the Department of Justice collected in October 2015.

“I’m currently negotiating the budget here at the state [level] with the legislature to shut down two state prisons,” Newsom said about his work on prison reform. “You haven’t heard that from a governor in half a century. We are negotiating with the state legislator to eliminate the Department of Juvenile Justice—long been a black eye in the state, in terms of how we treated our youth and how we have failed them in this system, and we are going to advance those efforts.”

He continued, “We are negotiating right now with our unions—paid concessions, not increases—so that we can maintain our commitment to restorative justice and trauma-informed efforts throughout our state.”

Newsom went on to address the “educational disparities, health disparities and environmental disparities” that are impacting the Black community, including the coronavirus pandemic, which Newsom calls a “twin crisis” alongside police brutality. 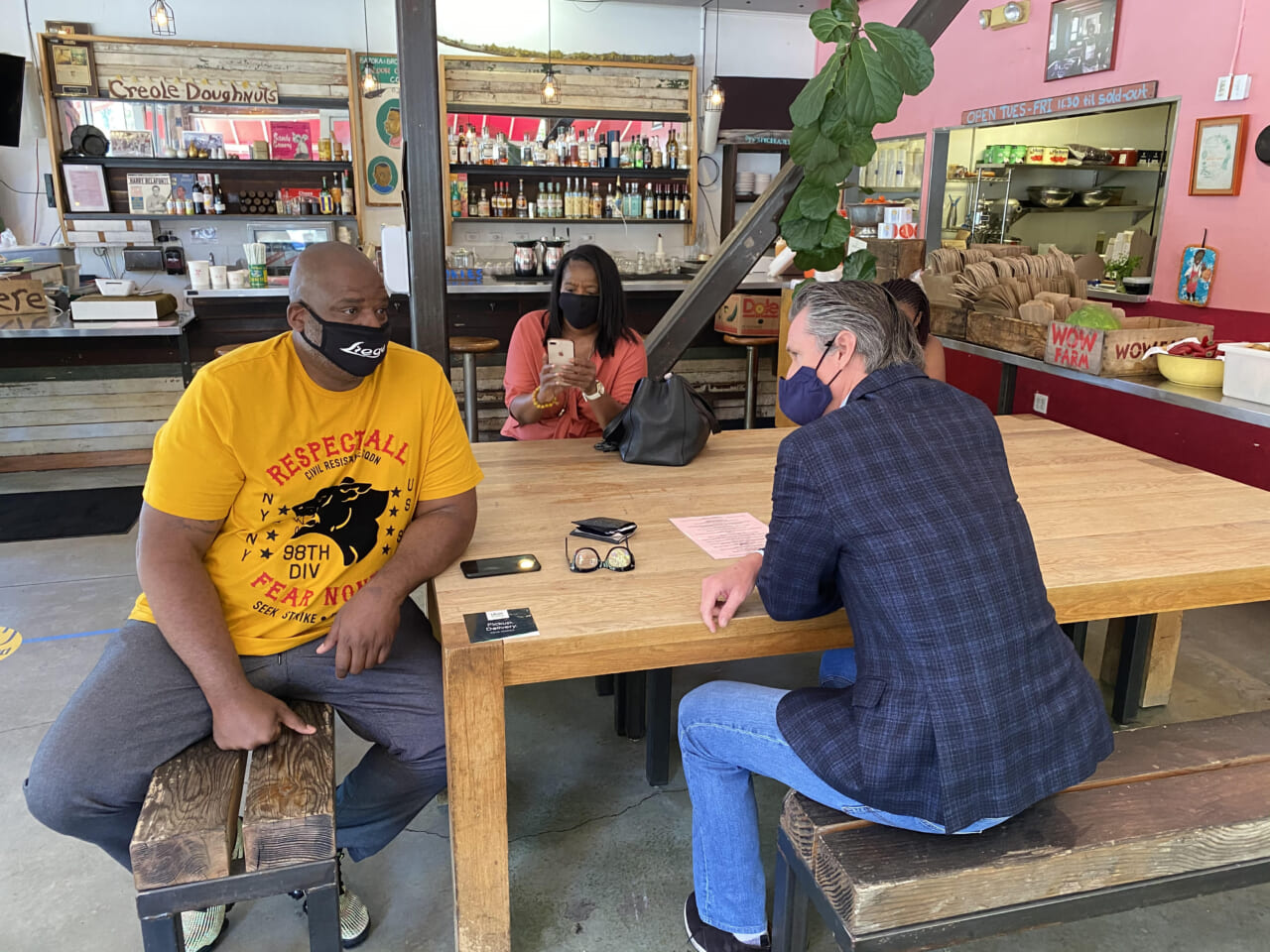 To better understand the issues affecting the Black community in California, Newsom met with local leaders and Black business owners in Los Angeles, Oakland and Stockton during the first week in June. The experience taught him that people have “run out of patience” and are ready for “demonstrable change.”

“They want leaders at every level to not just show empathy, but have a much deeper level of understanding about the moment we’re living in. They demand that we start to dismantle, brick by brick,” he said about the one-on-one meetings. “These institutions that we built up, a hierarchy we built up that diminishes and demeans the Black community, and has advanced the kinds of injustices that we see manifest across this country for decades.”

RELATED: L.A. Pride to march in solidarity with Black Lives Matter on June 14

Amid all of the civil unrest occurring in California and throughout the United States, Newsom is left with one feeling: “a deep sense of optimism.” The governor said that the work he has witnessed from activists and change-makers has left him “deeply humbled” and ready to advance the cause.

“I feel like we were at this moment in our history, and all of us will be judged, but perhaps more importantly, judge ourselves to the extent we meet this moment,” he shared. “I just want folks to know, in the state of California—that prides itself on being America’s coming attraction, where we long say ‘The future happens here first’—while we have led in a lot of areas, I’m deeply humbled as a fifth generation Californian, I’m deeply humbled by our inadequacies.”

He concluded, “Deeply humbled by the work that we have ahead of us and just want folks to know that I feel deep weighted responsibility to do more, to be better, and to work with the community to do justice and to advance the broader cause of justice.”