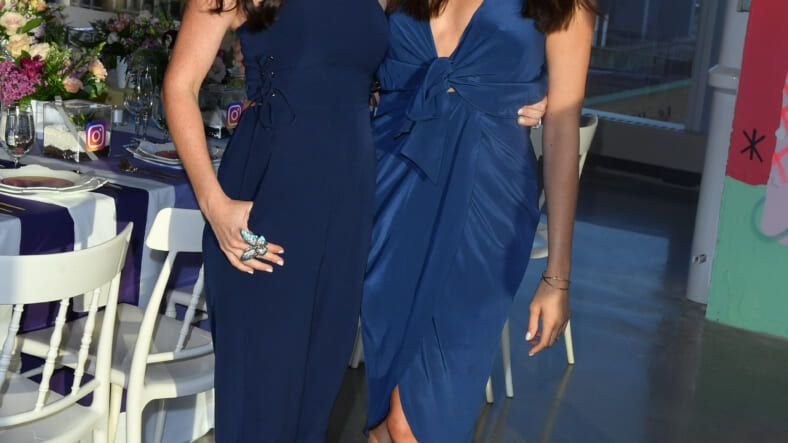 Jessica Mulroney and actress Meghan Markle attends the Instagram Dinner held at the MARS Discovery District on May 31, 2016 in Toronto, Canada. (Photo by George Pimentel/WireImage)

Meghan Markle is reportedly “mortified” and questioning her friendship with Jessica Mulroney after the Canadian stylist and television personality’s feud with a Black lifestyle blogger spilled into the public eye.

“Meghan is absolutely mortified that she’s been dragged into this complete mess,” a close friend of Markle’s told The Daily Mail. “She said Jessica is in no way a racist, but the way she handled the situation (with the fashion influencer) was tone-deaf and heartbreaking.”

The outlet did not disclose the identity of the source.

The report comes amid a beef between Mulroney and writer Sasha Exeter over white privilege in the wake of nationwide protests and civil unrest against systemic racism that has captured the attention of the world.

The fallout from the conflict led to Mulroney’s release from ABC‘s “Good Morning America,” where she served as a fashion consultant for the morning show. Her CTV show “I Do, Redo,” has also been pulled.

As Jessica Mulroney said last night, she is stepping away from her professional engagements and that includes Good Morning America. She will no longer appear on our show.

Mulroney is said to have been behind the wedding planning for Markle’s royal wedding to Prince Harry in 2018.

Mulroney allegedly threatened legal action against Exeter, who sought to raise awareness about the movement for Black lives.

“Meghan said friends reflect friends and because of what’s at stake she can no longer be associated with Jessica, at least not in public,” the British outlet reports the source said.  “She has to do what she has to do in order to preserve her dignity and her own reputation.”

In a roughly 12-minute video posted to her Instagram page, Exeter claimed that Mulroney “took offense” to her “generic” call-to-action in response to the ongoing demonstrations against police violence and the racial inequity harming Black America.

In the Instagram post, Exeter referred to it as “MY ‘AMY COOPER’ EXPERIENCE,” referencing the white woman who called the cops on a Black birdwatcher in New York City’s Central Park last month for no reason.

I’ve been silent. Not anymore!⁣ ⁣ I’m used to being so transparent on this platform. I think it’s the main reason why most of you follow me. Today, I’m opening up about something that has been haunting me for the last week. I have felt like a complete fraud fighting for racial equality and using my voice openly here, while letting a white woman silence mine behind closed doors. In sharing this very personal story, I know that I am risking a lot. Opening myself up to criticism, bullying and potential ramifications with my job in this space. However, I must speak my truth. Enough is enough. Hopefully my voice will be heard by many and help change things for the next generation and for my daughter Maxwell… because I will be dammed if my child ever has to deal with this level of ignorance.

“What happened next was a series of very problematic behavior and antics that ultimately resulted in [Mulroney] sending me a threat in writing last Wednesday,” she explained.

“Listen, I am by no means calling Jess a racist but what I will say is this, she is very well aware of her wealth, her perceived power and privilege because of the color of her skin,” she continued.

“For her to threaten me ― a single mom, a single black mom — during a racial pandemic blows my mind,” Exeter added. “The goal here is genuine, transformative change ― not optical and performative bulls–t. You cannot be posting that you stand in solidarity while attempting to silence somebody via text.”

After the public apology, Exeter shared a screenshot of a direct message that she received from Mulroney, which contained the threat of a lawsuit.

Mulroney issued a public apology publicly to Exeter on the Instagram post, in which she said that her friendship with the Duchess of Sussex was “deeply educational.”

“I learned a lot from that,” Mulroney said. “I promise to continue to learn and listen on how I can use my privilege to elevate and support Black voices.”

Despite the Wednesday apology, Exeter on Thursday shared a screenshot of a direct message from Mulroney threatening a lawsuit, saying “Liable (sic) suit. Good luck.”

“After her public apology on my post yesterday, I received this via DM,” Exeter wrote in the post to her story, adding “poor thing didn’t even spell ‘libel’ correctly.”

That triggered one more response from Mulroney later that day, who said she has “no intention of pursuing any legal action,” adding that “I was wrong, and for that I am truly sorry.”

Please read my statement. It is from my heart.