Danny Green talks protesting, his podcast and the NBA’s return

The Los Angeles Laker is dishing on his broadcasting dreams and what changes he would like to see before the league's return to basketball. 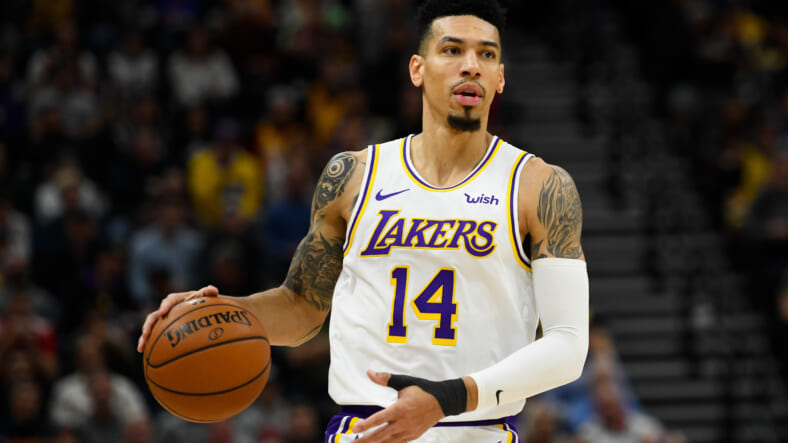 Danny Green #14 of the Los Angeles Lakers in action during a game against the Utah Jazz at Vivint Smart Home Arena on December 4, 2019 in Salt Lake City, Utah. (Photo by Alex Goodlett/Getty Images)

Danny Green has certainly made a name for himself in his 10 years in the NBA.

The Los Angeles Lakers forward is a two-time NBA champion, but Green is determined to make a name for himself off the court with some of his other passions. theGrio spoke with the NBA star about his passion for broadcasting, his to choice to join the Black Lives Matter protests and be vocal about racial injustices, as well as his thoughts on the NBA returning in Orlando.

In 2018, Green launched his podcast, Inside The Greenroom, with longtime pal and friend Harrison Sanford. Although the show officially launched in 2018, Broadcasting wasn’t something that was new to him. While in college at University of North Carolina, he majored in communications and even attended a four-day crash course at Syracuse University.

When asked what first sparked his interest for broadcasting, Green stated that the career choice was his “backup plan.”

“I always went school with a backup plan. Everything I did was a backup plan because I never was the most talented guy,” he explained. “I wasn’t, you know, the superstar at all. Like I said, I had to work on those things and I knew one day basketball would end for me. So I had to have that. Whether that was playing or not, I had to figure out what I would do to stay around the game and do something media-wise. So that was one of the parts of doing it, analyzing the game, commentating the game, you know, doing sideline, breaking it down.”

Danny Green(@greenranger14 )spoke on the #NBAReturn, going out to protest, his passion for broadcasting , as well as his podcast @insidegreenroom Host: @nayo_campbell • • #lakers #nba #thegriocrossover

Green cited longtime broadcaster and late journalist Stuart Scott as one of his inspirations, as well Kenny Smith and Rick Foxx as the people that he looked up to in broadcasting.

The podcast features interviews with some of the biggest names in sports and entertainment. The Lakers star opened about one of his most challenging shows and interviews, which was the episode paying homage to the late Kobe Bryant. Green shared how tough it was to go on air after his passing.

“The most difficult for sure is probably when we had to talk about Kobe,” he said. “Right after that, and then talking about it was probably the toughest one for sure.”

The podcast host shared not only how hard that episode was, but also his feelings during the first game back in January following Bryant’s death. The Lakers paid homage to the late star with a tribute and memorial service before the game.

The Lakers guard opened up about what it was like playing against the late NBA veteran, saying that the two had “some competitive games.”

“We had some moments. We had some moments where, you know, we won, they won. I had to earn his respect,” Green said. “And I did it. You know, some random times he showed that he had some respect for me, which was the ultimate compliment for any NBA player. So, yeah, it was a special moment for the last time that he came to us. You can see he came [to see us] twice I think, this past year before it happened. He said those two times—[you] get a chance to just say hello and speak to him briefly. It was just—you just said he’s just different guy and he was happy enjoying the sideline with his daughter type of guy.”

2020 certainly hasn’t been an easy year for the NBA, and with the recent police murders of black people, outrage and protest has sparked across the world. The NBA veteran has a made it a point to use his platform to be vocal on the many injustices. He was seen out protesting while in LA and spoke about the importance of protesting to provide change.

“I mean, it seems as if, you know, this only way to be heard,” Green explained about taking to the streets. “You know, obviously, we’ve been using our voices. We’ve been using our platforms. We’ve done so many other things. But it seems as if they don’t take us seriously or make change or action doesn’t happen, unless we take action. Unfortunately, you know, we hate to see [the unrest]. We don’t want it to happen to have our communities or cities burned down. But it seems this is the only way that we can get our point across or their voices to be heard, but more importantly, to get out there and get action and show unity. Show peacefully, if you can, being there in your presence is more of a sign…showing that we mean business.”

Green also brought up the importance of voting to continue to make progress.

“We’re taking it serious and you know that people want some change and hopefully, I mean, some progress has happened,” he continued. “Hopefully more progress will happen. And the government, the system, even the local people and local cities take it seriously. We also need to get out and vote, get more people to vote because that’s important. Hopefully we get the change that we’re looking for.”

The NBA is set to return in July in Orlando, but the league recently faced criticism and conversations pertaining to the season restarting. Some players have argued that the return is a distraction to the racial injustices that are currently happening in America, as well as the fact that players will be isolated from their friends and family for at least month.

Although Green is happy they were able to get it done, he did mention that players are fighting for some changes regarding their return to basketball.

“I know players are fighting for a lot of different things we want changed,” he said. “Because it’s not gonna be realistic to try to keep us there without our friends and families for a month and a half, or no other interaction. We’ll see our people and then being quarantined for seven days before they can see us when they do come. So they’ve got to adjust and change things.”

Changes and adjustments to the season are ongoing but the season is still slated to return at the end of July.

Until then, fans can binge watch all of Green’s episode of Inside The Green Room on the podcast’s website, as well as on YouTube and Apple Podcast. Fans can also follow Green and support the show on his personal Instagram page, @greenranger14, and @insidethegreenroom.

theGrio‘s full interview can be found on our IGTV and you can catch more episodes of #TheGrioCrossover coming soon.