Through her work in creating 'NEGRO: A DOCU-SERIES ABOUT LATINX IDENTITY,' Harris hopes to dismantle anti-Blackness in the LatinX community. 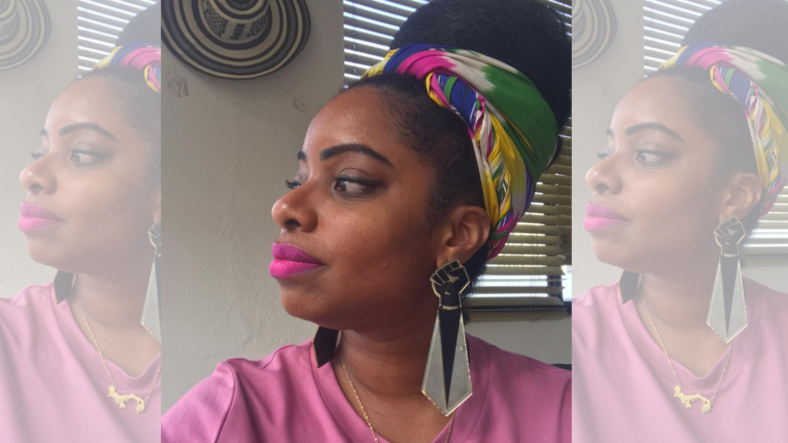 The African diaspora gave much of the world a very layered identity. For centuries, the slave trade resulted in African natives being sold or stolen as slaves and transported across the globe. Now, Black people reside in countries from the United States and Brazil to Haiti and the Dominican Republic.

Dash Harris, an Afro-LatinX woman, understands not only her multi-cultural heritage but also the implications and societal structure surrounding her identity. Through her work in creating NEGRO: A DOCU-SERIES ABOUT LATINX IDENTITY and more, she hopes to highlight LatinX existence and dismantle anti-Blackness in the LatinX community.

Harris, who describes herself as being from “Planet Brooklyn of Bedstuy,” remembers her hometown before mass gentrification transformed her block right before her eyes. The brownstones may now be unrecognizable, however, she remembers her vibrant and upbringing in the borough rooted in cultural pride.

“I grew up in Brooklyn. It was a huge Panamanian community and a Black Panamanian community who have always been proud of being Black,” she tells theGrio. “So my context was always proudly Black Central American. That was what it was. It wasn’t a journey you had to take, or an epiphany. Nothing like that.”

Her docuseries, NEGRO: A DOCU-SERIES ABOUT LATINX IDENTITY, began production in 2010 and according to the official website, “explores the history and present attitudes of race, color, self-identification and social interaction among Latinxs from Latinxs themselves.”

Harris, began her series in Brazil while on a trip for Carnival with her best friend. At the time, Harris was a journalist and frequently carried a camera. During their excursion, a local resident (a Black-man paying extra affectionate attention to her travel partner) answered her questions about being Black in South America.

“This fine Brazilian guy was trying to get my friend, and he was just talking to her [for] too long,” she describes. “You know what I mean? Even if they’re fine, you have to go and be like what’s happening here.”

Harris continues, “He was engaging my friend in racial politics talk, and I’m like, ‘This is interesting because everyone’s partying. Why would you talk about this now right?’ He was basically saying that he was extremely proud that Obama was the president. He was like, ‘I identify with him, a Black man as president.’ I was like, ‘Oh, wow interesting. So I started video recording the conversation, and I asked him, ‘Is being Black in Brazil bad?’ He responded, ‘Being Black is bad in the world.’ He was drunk, but he was really articulate. I think he probably [has] said this a lot of times. That was my first video.”

NEGRO is a passion project funded by Harris, her friends, family and supporters who understood the importance of the work. Through the docuseries, Harris aims to combat many issues and Black people speaking Spanish is at the forefront. Her own childhood was plagued with people questioning her allegiance to Blackness when she spoke Spanish.

What if I told you that the modern-day Prince Hall #38 Mason Lodge was entirely Spanish-speaking prior to 1900 and the person who was integral in making the switch from Spanish to English was a Black Puerto Rican who was the pioneer in the collection and archiving of Black history in the Americas and beyond? If you’re talking about Blackness and not talking about Latin America and the Caribbean, you ain’t talking about shit. . . #DailyDashofDiaspora

READ MORE: What does it mean to be black and Latino? Afro-LatinX leaders open up about identity, racism and black pride

Through her own experience, knowledge, and communications with others, Harris knows that although some communities are anti-Black, many Black LatinX people across the world have not only shown pride in their Blackness, but remain diligent in the global fight for equality.

“Black awareness, consciousness, and even movements are not ‘new’ to Black Latinos. Just because one does not know about them, does not mean it is not happening,” she tells theGrio. “Latin America is neither ‘behind’ or ‘lagging’ as it relates to organizing around an Afro descendant consciousness. Folks who don’t speak Spanish or Portuguese are prone to saying these inaccuracies because of that language barrier or [because] this is a topic that is of new interest to them. We are not new to this, we are true to this.”

According to the multimedia talent, this holds true for current Black Lives Matter and anti-police brutality uprisings in the United States.

“Black and Afro-Latinxs have been doing their own organizing for generations, but in this current iteration, have shown extreme solidarity with U.S. Black people because it is our struggle as well,” says Harris. “When they are doing their own marches and protests, it is to demand justice for their very own Black Lives that have been systematically targeted and marginalized. Afro-Colombian social leaders are systematically assassinated and just this past month, as they were marching in Bogota, they are seeking justice for Anderson Arboleda, who died because of police baton blows to the head and was tear-gassed right at his front door.

She adds, “[There are] many others whose murders have not seen justice throughout the American continent. We were just circulating a petition to re-open the case of Austin native Javier Ambler, a Black Panamanian whose death was ruled a homicide, yet none of the cops who did it were charged. We face the same white pathology and have always and will continue to stand together.”

Beyond the docuseries, Harris hosts a podcast Radio Caña Negra, where she along with two co-hosts discuss issues related to Black people of Latin American descent. The podcast team also hosts workshops, most recently at Stanford University, targeted towards white Latin Americans with the hope of overcoming white supremacist ideologies and behaviors that have been normalized throughout generations.

“There are white Latinos. There is a white ruling class in Latin America. Folks always default to Latinos being ‘people of color’ inherently and this is just not the case,” she explains. “It actually perpetuates, absolves, and allows white supremacy to flourish in the region by pretending that Anglo white is the only dangerous, violent, genocidal brand of whiteness. The white colonizers that put themselves at the top of the pigmentocracy and color and racial hierarchy didn’t magically disappear. They left their white descendants that to this day hoard power and marginalizes anyone who isn’t like them.”

She concludes, “For anyone confused about this, simply Google any of the leadership, politicians, or even just turn on Spanish-language media. The white supremacist power dynamics that comprise the U.S. are the same power structures and systems that rule Latin America.”