Reconstruction in America reports that the newest total stands at a whopping 6,500, and that’s not including the still unknown lynchings.

Tatianna Mott
A statue of a chained man is on display at the National Memorial for Peace and Justice, a new memorial to honor thousands of people killed in racist lynchings, in Montgomery, Ala. (AP Photo/Brynn Anderson, File)

As we prepare to celebrate Juneteeth, it is being reported by the Equal Justice Initiative that more Black people were lynched than previously believed.

Juneteeth is a holiday commemorating the abolishment of U.S. chattel slavery with the passage of the Emancipation Proclamation, the 13th Amendment, and the union victory during the Civil War. The timely release of Equal Justice Initiative report reminds us of the importance of this era of American history.

READ MORE: Here’s what to know about George Stinney’s wrongful execution in 1944

EJI's new report examines the 12 years following the Civil War when violence perpetrated by white leaders against Black communities created an American future of white supremacy and Jim Crow laws—an era from which our nation has yet to recover. https://t.co/QB5qR8T9M8

Following the Civil War, the U.S. entered a tumultuous period from 1865-1877 known as Reconstruction. During this time, the previously seceded Confederate Southern States along with the 4 million newly-emancipated Black American population were hastily reintegrated into the United States.

Despite the immense violence and oppression that Black Americans faced during two and a half centuries of bondage, most formerly enslaved people in the United States were remarkably willing to live peacefully with those who had once held them captive.

Emancipated Black people began to embrace education, faith, and newfound citizenship, by registering to vote, and even running for and winning elections in southern state legislatures and the U.S. Congress. In less than a decade, however, Black advancement was quickly met with violent backlash by reactionary forces, including the Ku Klux Klan. 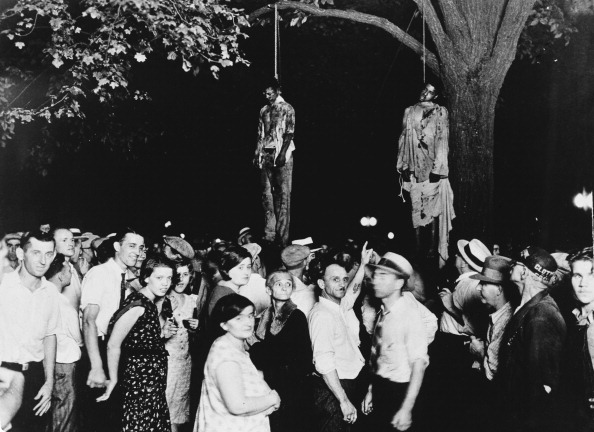 A crowd gathering to witness the killing of Thomas Shipp and Abram Smith, two victims of lynch law in Marion, Indiana, 7th August 1930. This image was the inspiration for the poem ‘Strange Fruit’ by Abel Meeropol. (Photo Lawrence Beitler/by Hulton Archive/Getty Images)

The newest total stands at a whopping 6,500, and that’s not including the still unknown lynchings as well as the thousands more who were attacked, sexually assaulted, and terrorized by white mobs and individuals who were shielded from arrest and prosecution.

Despite Constitutional amendments ratified to provide Black people with equal protection under law, this period of Reconstruction invited lawlessness that allowed white perpetrators to enact violence without retribution. In fact, many of these lynchings were celebrated public spectacles, memorialized on souvenir postcards.

According to the report, “within a decade after the Civil War, Congress began to abandon the promise of assistance to millions of formerly enslaved Black people. Violence, mass lynchings, and lawlessness enabled white Southerners to create a regime of white supremacy and Black disenfranchisement alongside a new economic order that continued to exploit Black labor.

People often dismiss these findings as simply a footnote in American history that was suddenly and wholly eradicated by the Civil Rights Movement. But today is the 76th anniversary of the state-sanctioned lynching of George Stinney Jr. via the death penalty which presently continues to disproportionately condemn Black and Brown men, a cause that EJI is committed to fighting.

Also, mysterious deaths of Black activists over the years along with a string of recent deaths by hanging, have many fearing that America’s violent past has never indeed ended.

“We cannot understand our present moment without recognizing the lasting damage caused by allowing white supremacy and racial hierarchy to prevail during Reconstruction,” Bryan Stevenson, Director of the Equal Justice Initiative, said in a statement.