Biden’s vice presidential search is entering a new round of vetting, and Warren is still on the list along with several Black women

WASHINGTON (AP) — Shortly before Elizabeth Warren joined their virtual happy hour on a recent Friday afternoon, the five African American women co-hosting the #TheSipHour mused about calling her by her first name.

The Massachusetts senator had her own moniker in mind.

“I was going to say I’m here today as an ally, but can we really just say co-conspirator?” laughed Warren, one of the few white women to appear at the events organized by Higher Heights For America, which promotes the organizing and voting power of Black women. “Nothing’s going to change unless it is Black women’s voices that are uplifted.”

Such overtures could help Warren’s bid to become Joe Biden’s running mate. The presumptive Democratic nominee is under mounting pressure to pick a Black woman in the wake of recent outrage over racial injustice and police brutality. But some Black leaders say Warren’s progressive politics, economic populism and specific policy proposals addressing everything from maternal mortality to the coronavirus could put her in a strong position.

“I think she’s totally still viable,” said Nelini Stamp, director of strategy and partnerships for the Working Families Party, a progressive labor activist group that endorsed Warren in the primary. “Warren is one of the folks whose been talking about big structural change. And when we’re thinking about re-imagining public safety, that is something that’s going to require some actual structural change.”

Representatives for Warren and Biden declined to comment. The pair speak frequently, and Warren hosted a virtual fundraiser for Biden on Monday that raised an impressive $6 million. 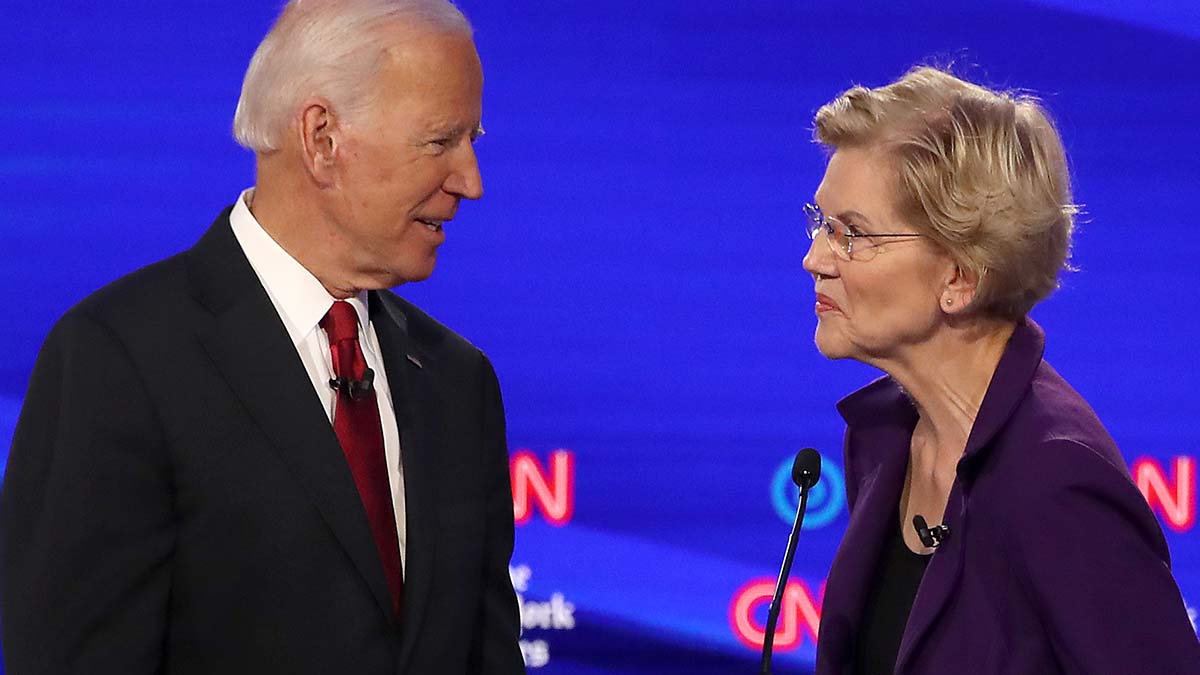 Former Vice President Joe Biden and Sen. Elizabeth Warren (D-MA) react during a break at the Democratic Presidential Debate at Otterbein University on October 15, 2019 in Westerville, Ohio. A record 12 presidential hopefuls are participating in the debate hosted by CNN and The New York Times. (Photo by Win McNamee/Getty Images)

Warren told an audience of more than 600 that when her eldest brother died of the coronavirus in April “he was alone. I couldn’t be with him.” But she said Biden called and “told funny stories that made me laugh in a way that reminds us all of the good times that we have had with someone we have loved and lost.”

“The door to change has been cracked open,” Warren said. “If we want to swing that door wide open then we must do the most good that we can do at this moment.” She urged sowing “a seed for the America of your greatest imaginations.”

Biden’s vice presidential search is entering a new round of vetting, and Warren is still on the list along with several Black women. They include Sen. Kamala Harris of California; Susan Rice, who served as President Barack Obama’s national security adviser; Atlanta Mayor Keisha Lance Bottoms; and Rep. Val Demings. New Mexico Gov. Michelle Lujan Grisham, a Latina, is also being considered.

Some Democrats say Amy Klobuchar’s standing has fallen since George Floyd’s killing by Minneapolis police. The Minnesota senator, who’s white, was a prosecutor years ago in the county that includes Minneapolis. During that period, more than two dozen people — mostly people of color — died during encounters with police.

The search was described by Democrats familiar with the process. They spoke on condition of anonymity because they weren’t authorized to publicly discuss the vetting.

During her bid for the Democratic nomination, Warren actively courted black activists and assembled a deep roster of endorsements. She gave a memorable speech in Atlanta in November on empowering black women and combating institutional racism that some African American leaders laud as prescient.

Warren talked ”in a very straightforward manner about many of the systemic issues that have plagued African Americans from the very beginning of our time here in America,” said South Carolina state Rep. Kambrell Garvin, who endorsed Warren in the primary. He said those included voter suppression and redlining, a term for banking standards that long made it difficult, if not impossible, for black families to secure mortgages in white neighborhoods.

“I think that she could be an interesting and compelling pick for Vice President Biden in regards to reaching out to African American voters,” Garvin said. 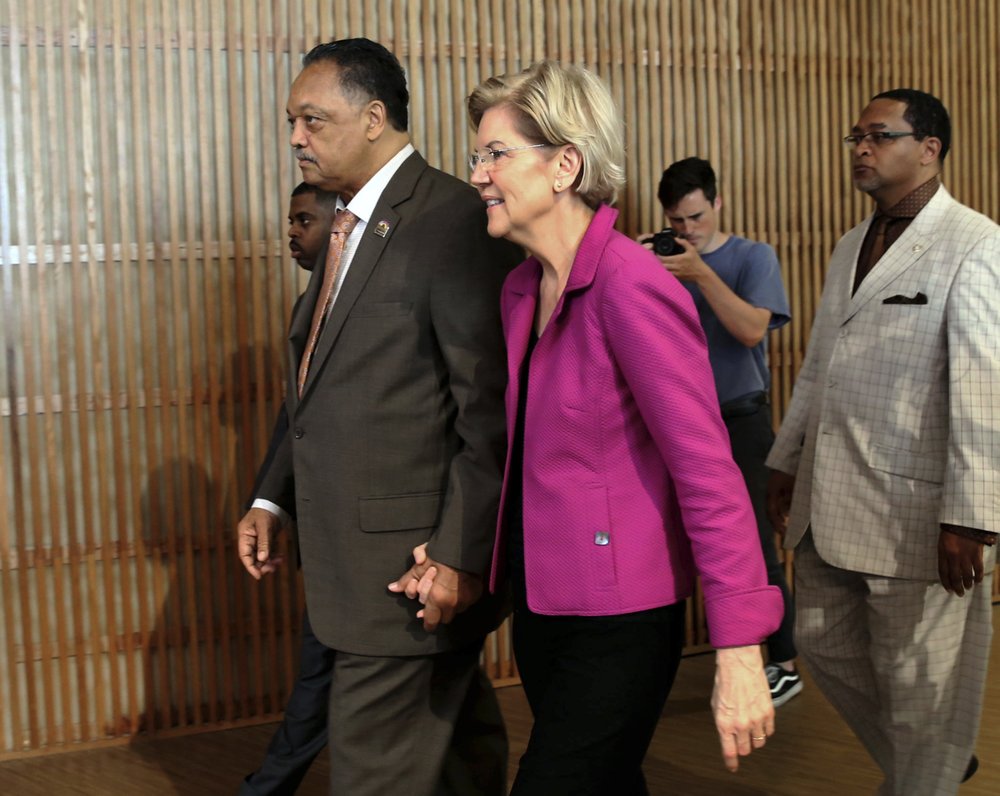 Some 61% of African American voters supported Biden, according to AP VoteCast surveys in 17 states that voted between Feb. 3 and March 17. Warren earned just 5% of their vote, far less than the race’s other strong progressive voice, Vermont Sen. Bernie Sanders, at 21%.

But about 7 in 10 black voters nonetheless said they would be satisfied if Warren won the Democratic nomination for president, roughly as many that said that of Sanders. That suggests favorable ratings possibly durable enough to apply to the vice presidency under Biden.

Warren has continued to focus on race after ending her presidential campaign.

She joined Black Lives Matter protesters outside the White House this month with her husband and their golden retriever, Bailey. She has called for banning chokeholds as just the start of a larger overhaul of policing nationwide, and introduced legislation prohibiting the use of Confederate names and symbols from all U.S. military assets that has even drawn the support of some of her Republican Senate colleagues — as well as Biden.

The Rev. Jesse Jackson hosted a virtual town hall with Warren this month on the effects of the coronavirus. He said he still considers her “in the mix” for the vice presidential slot, but said picking a Black woman could give Biden a boost in support from African American female voters that might be similar to the one that lifted Democrat Doug Jones to an upset 2017 Senate victory in Alabama.

“I think he should choose an African American,” Jackson said. “He needs the South to come alive.”

During her appearance on #TheSipHour, Warren was asked candidly by Fatima Goss Graves, president and CEO of the National Women’s Law Center, how she talked with white relatives and friends about the protest movement. Warren responded that she’s stressed the need for non-blacks to educate themselves on the African American perspective.

“You’ve got to stop talking,” she said, “and start listening.”