L.A. Chargers say they are open to workout with Colin Kaepernick

One of the NFL's three African-American coaches says he'd offer Kaepernick a tryout.

Despite the NFL belatedly embracing the Black Lives Matter movement, Colin Kaepernick has not been a part of the league’s future plans thus far. The former NFL quarterback, who took the 49’ers to a Super Bowl in 2013 in a losing effort, generated controversy when he began to kneel at NFL games in 2016 during the playing of the national anthem.

In the wake of the deaths of Trayvon Martin and Micheal Brown, Kaepernick wanted to highlight the plight of African Americans dealing with racism and police brutality. But that narrative was quickly changed as some NFL fans saw it as a sign on disrespect to members of the armed services.

After that season, Kaepernick was believed to have been blackballed from the NFL due to the controversy generated by the anthem protests that reverberated around the league. He settled a collusion lawsuit against the NFL in February of 2019 but the terms were not disclosed.

Later that year, Kaepernick was offered a “workout” attended by more than 20 teams but he and the NFL disagreed on who had agreed to what. In the end, he only worked out for four teams. 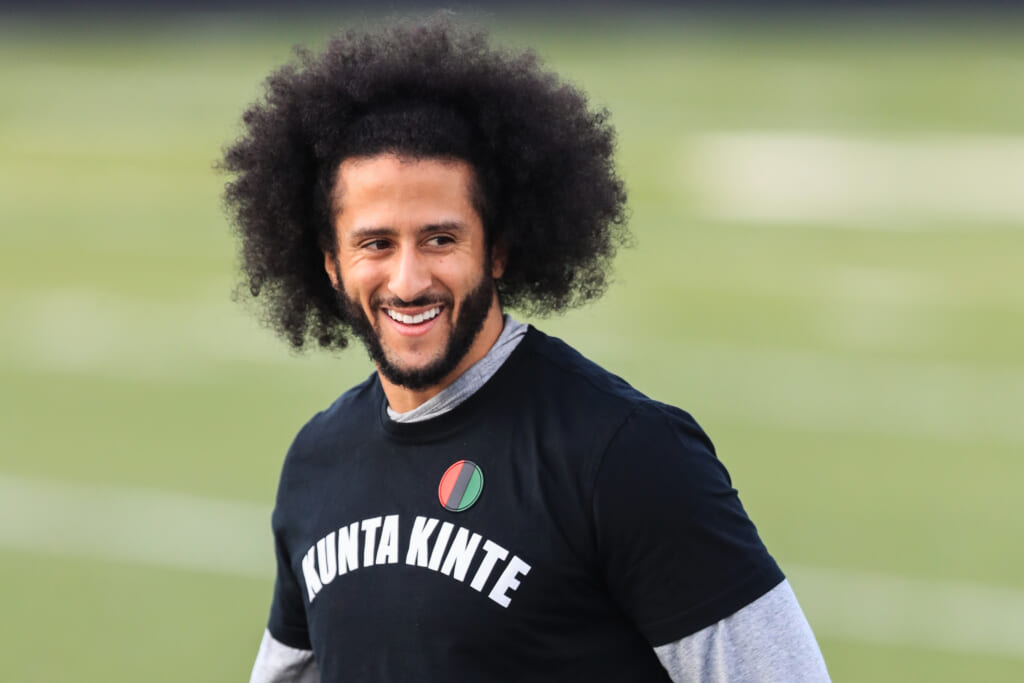 Colin Kaepernick looks on during a private NFL workout held at Charles R Drew high school on November 16, 2019 in Riverdale, Georgia. Due to disagreements between Kaepernick and the NFL the location of the workout was abruptly changed. (Photo by Carmen Mandato/Getty Images)

Fast forward to this year, when the killings of Breonna Taylor, Ahmaud Arbery, and George Floyd kicked off protests in all 50 states, prompting a reckoning in the nation on racism. Part of that reckoning was a video from top football players, including Super Bowl champion and MVP, Kansas City Chiefs quarterback Patrick Mahomes, asking the NFL to clearly repudiate racism.

League commissioner Roger Goodell did so in his own response video, declaring that Black lives matter and that the league couldn’t exist without its Black players.

We, the NFL, condemn racism and the systematic oppression of Black People. We, the NFL, admit we were wrong for not listening to NFL players earlier and encourage all to speak out and peacefully protest. We, the NFL, believe Black Lives Matter. #InspireChange pic.twitter.com/ENWQP8A0sv

Yet there were no overtures made to Kaepernick, who nevertheless was the catalyst for change, including the NFL’s commitment to social justice, Inspire Change, and its entertainment partnership with Jay Z.

However, maybe relations are thawing around the league as today, Los Angeles Chargers coach Anthony Lynn said he’s open to working Kaepernick out.

“That’s something that’s probably on the list,” Lynn said in an interview with ESPN.  “I haven’t talked to him and don’t know where he’s at or what he wants to do with his career. “He definitely fits the style of quarterback for the kind of offense we’re running. I’m very happy with the three quarterbacks that we have but you can never have too many people sitting on the runway.”

Though it wasn’t a firm commitment, Lynn is one of only three African-American head coaches in the league this season. Lynn already has Tyrod Taylor as his starter but Taylor hasn’t helmed a game since 2018. The team drafted Justin Herbert from Oregon and also has Easton Stick, a fifth-round pick from 2019.

But things can rapidly change in the NFL.

Kaepernick has not publicly commented on any possible future with the NFL in the wake of the recent police killings. He recently committed to paying bail for protesters through his Know Your Rights camp Legal Justice Initiative.

President Donald Trump weighed in on the topic Wednesday and said he’d support Kaepernick playing in the NFL if he “deserves it.”

"Absolutely I would," support @Kaepernick7 getting a 2nd shot in the @NFL — @POTUS in my interview today on racism, policing, statues & yes–sports. #ColinKaepernick pic.twitter.com/0B83cNbesW