The actress continues her fight against the discriminatory conduct and 'toxic' environment she says she experienced on "AGT." 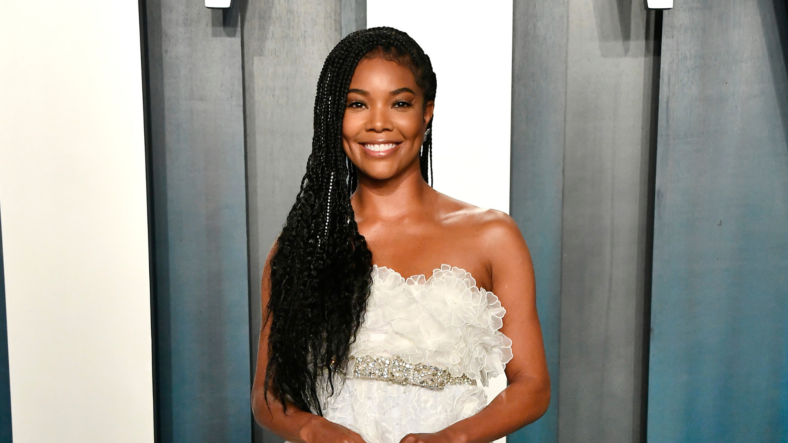 Gabrielle Union is spilling all the tea about her ongoing battle with NBC and America’s Got Talent after being let go from her hosting gig on the popular competition series.

The actress shared new details of her allegations of racial insensitivity and a toxic work environment with host Trevor Noah on The Daily Social Distancing Show this week. She also opened up about the subsequent investigation and it’s clear she feels anything but objective.

Fremantle and Syco are the two companies behind AGT, The X Factor, and the original version of American Idol. Syco was founded by Simon Cowell, who also works as a judge on AGT and was the subject of many of Union’s complaints.

She claims he smoked cigarettes on set – a major problem for Union, who is allergic to the smoke.

“With ‘AGT,’ trying to work within a system of… I thought it was the easiest show! How hard is it to, you know, watch jugglers? That’s what I thought I signed up for. Day one, you know, Simon Cowell is smoking cigarettes inside. I’ve worked a long time, I’ve worked with all kinds of people, I’ve never experienced that,” she said.

“So, when your boss, the person who has the ability to determine who gets opportunities and who doesn’t, doesn’t believe the law applies to him or the rules apply to him and he does it in full view of NBC, Fremantle and Syco and no one cares about Simon Cowell exposing all of these employees to second-hand smoke. That’s day one, that’s within the first hour,” she continued.

“What message do you think that sends to anyone that has an issue with the very real racism and the lack of accountability? And it goes on and on and on.”

Union’s contract wasn’t renewed. The decision reportedly had a lot to do with her complaints of racial discrimination, racially insensitive performances, and other issues.

“When Gabrielle Union informed NBC of racially offensive conduct during the taping of America’s Got Talent, NBC did not ‘stand’ with her in ‘outrage at acts of racism,'” Union’s attorney, Bryan Freedman, said in a statement to CNN. “Instead, NBC did not care enough to either promptly investigate Ms. Union’s complaints or even ask HR to get involved. Rather, NBC stood against her and directed its ‘outrage’ at Ms. Union for whistleblowing about the racially offensive conduct she experienced while working for NBC on America’s Got Talent.”

Although the investigation didn’t find any evidence of wrongdoing Union’s not backing down.

Earlier this month, she filed a complaint with the state of California, citing harassment and discrimination due to her race. Union also claims that an NBC Entertainment chairman tried to intimidate her.

“I participated in this investigation, and the investigation was ongoing, they turn over what they believe to be inflammatory things or things that are not advantageous to me, over to the head of NBC, Paul Telegdy, who then uses those things that he thinks are like smoking guns to shoot down my claims,” she explained.

“He then threatens my agent [saying] ‘Gabrielle better watch who she calls a racist.’ In the middle of an investigation about racism and discrimination? This is what’s happening from the top of the company.”

So far, NBC seems to be sticking to its original statement, issued on June 4.

“The allegation that anyone involved in this process threatened Ms. Union is categorically untrue,” the statement read. “We took Ms. Union’s concerns seriously and engaged an outside investigator who found an overarching culture of diversity on the show. NBCUniversal remains committed to creating an inclusive and supportive working environment where people of all backgrounds are treated with respect.”

Aside from the AGT drama, Gabrielle Union is struggling, like so many, amid all of the chaos in the country right now.

“Honestly it’s just one big anxiety attack,” she said. “Between the global pandemic that the world is experiencing and waking up every day to the brutalization, the murder of Black bodies…[it’s daily]…the nonstop onslaught of trauma…I don’t even know if anxiety is a big enough word.”

Watch the clip from The Daily Social Distancing Show: