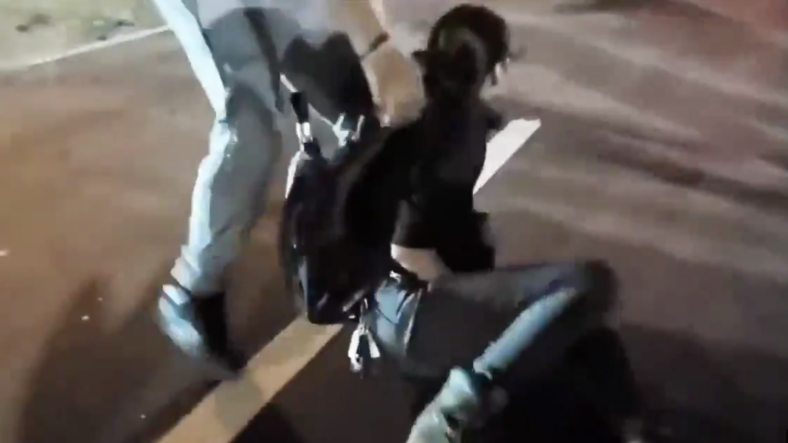 A woman was shot in Atlanta outside of the Wendy's restaurant where Rayshard Brooks was killed by police.

A woman was shot during a protest for Rayshard Brooks in Atlanta on Friday.

The shooting took place near the Wendy‘s restaurant that Brooks was shot and killed outside by police a week ago.

A video of the shooting was captured by a bystander near the protest and posted by TMZ. In the video, shots rang out during the protest, which was peaceful up to that point. People can be seen running away when an unidentified woman was hit in the leg.

The video was also shared on Twitter. Armed men can be seen walking around prior to the brief shootout that ensued.

This was Atlanta last night. pic.twitter.com/0tCsOUcAXX

The man capturing the incident said the bullets “almost hit me” and cried out for an ambulance. He also asked fellow protesters to dress her wound with a durag.

The end of the footage shows paramedics on the scene tending to the victim. TMZ reported that her injury is not life threatening and that she was taken to the hospital.

The Atlanta Police Department said the woman was shot in the leg and is “alert, conscious, and breathing,” WXIA-TV reports. The department is expected to give an update on the incident on Saturday.

Shots also rang out during another peaceful protest in Atlanta that evening, though no one was wounded. A suspect, who shot at a car after getting into an argument with the driver, has been taken into custody in that incident, WSBTV reports. a suspect was in custody. That shooting was also captured on video.

Unrest in Atlanta has been growing since police shot 27-year-old Brooks, a father and husband, in the back by Atlanta police on June 12. Brooks had fallen asleep in his car in the Wendy’s drive-thru lane and police were summoned. Officers gave Brooks a sobriety test and an altercation later ensued after the officers attempted to arrest Brooks.

As Brooks attempted to flee, an officer fired three shots striking the man in the back.

Protests have been taking place near that Wendy’s, which was set ablaze, ever since. Officer Garrett Rolfe, who pulled the trigger, was fired by the Atlanta Police Department and is now facing 11 charges including felony murder, three counts of aggravated assault with a deadly weapon, criminal damage to property, violation of oath, and aggravated assault. He could face the death penalty.

A second officer on the scene, Devin Brosnan, was also charged with aggravated assault and three other charges. Both men turned themselves in on Thursday and were booked in the Fulton County Jail.