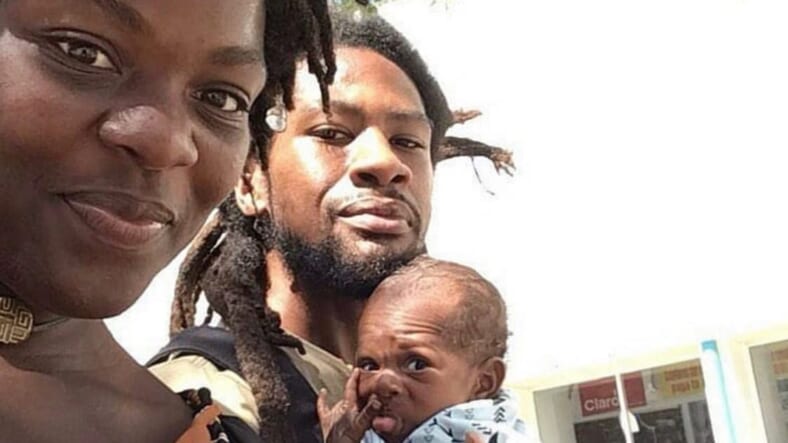 A Black couple who recently relocated to Puerto Rico are desperately fighting to regain custody of their son after the baby was taken by child services.

Chinyere Osuji and Ralphael Bey, who are from New York and Oklahoma, appeared in San Juan court on Wednesday in an attempt to gain guardianship of Messiah Bey, who is in the custody of the Department of Family, according to local news outlet Primera Hora.

The couple’s nightmare began nearly four months earlier when they went to speak with a coordinator for the Special Supplemental Nutrition Program, also known as WIC. Osuji wanted to apply for program benefits, but was met with suspicion from a WIC employee about her son’s weight, according to a GoFundMe page set up by the couple’s friend, Lauralina Meléndez.

“I expressed to the WIC coordinator that my family are long time vegetarians, and that I am fully breastfeeding my son and will continue to do so,” Osuji said per the GoFundMe.
“By the end of the appointment, I was not only told that my breast milk was insufficient and I must put my baby on infant formula because he was allegedly 1.5 pounds underweight, I was told that I must also take him into an emergency room to be examined in the midst of an ensuing global pandemic.”

The couple, who chose to stay in Puerto Rico after Osuji went into labor during vacation, did not feel comfortable taking Messiah, who was born premature at 37 weeks, to the hospital due to the COVID-19 crisis. A few hours after seeing the WIC coordinator, the couple were confronted by the authorities who said the pair were under investigation after being reported for “child neglect, abuse and malnourishment.”

According to the GoFundMe, San Juan police descended on the couple’s home a few days later and forcibly removed the then 3-month-old baby after a hours-long standoff.

“The SWAT team broke into our home and our son was taken. We have not seen him since,” Osuji reportedly said. “It has been 4 months since we have seen our son. Going to WIC tore my family apart and changed my life forever.”

The couple, who are not fluent in Spanish, have been struggling to regain access to their son in the ensuing months. Osuji and Bey have only seen Messiah twice via Zoom since March, according to Meléndez, and have had to undergo weekly drug tests and coronavirus tests in an attempt to physically see their child.

You know what bothers me most about this story, is the fact that we still find it so hard to believe that the treatment…

“Countless drug tests and COVID-19 tests passed and they STILL won’t let them see their baby because of their inability to organize and effectively go forward with the case,” Meléndez wrote per the GoFundMe. “These are well-educated people, professionals, loving parents who just happen to come on vacation and went into early labor. So [they] stayed in Puerto Rico and did their best to start a new life here and the system has showed them hell.”

Meléndez went on to tell Primera Hora that the pair are being discriminated against for being poor, Black outsiders who aren’t from Puerto Rico.

“They have been criminalized from the beginning,” the couple’s friend said.

Osuji and Bey are under a strict gag order that prohibits them from discussing the case. The couple reportedly looked “dejected, sad, almost on the verge of tears, and exhausted” when they exited the courthouse on Wednesday, according to Primera Hora.

The department, meanwhile, has released a statement claiming that they followed proper procedure in the removal of Messiah from his home.

RELATED: In NYC, how a new generation of Afro-Latinos celebrates their Blackness

“…All established protocols have been followed and all parties involved have been interviewed,” Glenda Gerena, administrator of the Administration of Families and Children, told Primera Hora. “The primary objective is to ensure the well-being of the minor and to have access to the necessary health services. The minor is in good health and remains in the state’s emergency custody. Since arriving on the island, this family has received all the requested assistance, including food assistance from the PAN program, the WIC program, legal services, the Department of Housing to obtain a home, among others.”

The statement went on to say that authorities are “evaluating all the processes that have led to this determination in order to preserve the health and well-being of the minor.”

Gerena added that the decision regarding custody of the child is now in the hands of a judge, who “will assess the evidence presented and the actions of the parties and will make the corresponding determination in law in the welfare of the minor.”

Supporters can donate to Osuji and Bey’s cause on their GoFundMe page.