In NYC, how a new generation of Afro-Latinos celebrates their Blackness 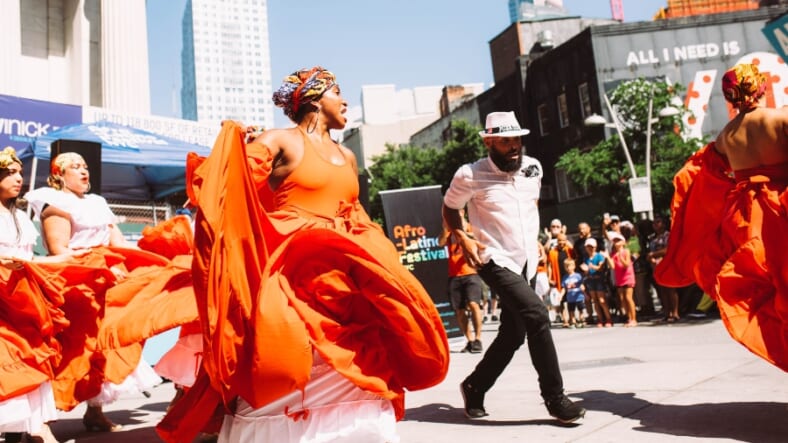 Francia Rivera and Jasmin Celini have finally found her.

The two young women stare in amazement at the life-sized poster of a girl who looks just like them. She is brown-skinned with big dark fluffy hair, a full nose and her arms flexed up like a Black “Rosie the Riveter.”

She also happens to have a cape and is flying in the air, but that’s not unusual. It’s what any superhero is supposed to do: defy gravity and expectations.

“La Boriqueña” is the first Afro-Latina character in the superhero universe, designed by Puerto Rican Marvel animator and activist, Edgardo Miranda-Rodriguez, and her posters are drawing a crowd at the 2019 Afro-Latino Festival in New York.

Jasmin and Francia, both hand over credit cards for Miranda-Rodriguez to swipe, as loud Caribbean beats play over the speakers in the large event space in Downtown Brooklyn.

“I was like oh my Gosh, somebody who looks like me with my hair!” says Francia, 21, a college student and dancer who is Dominican and Puerto Rican, while holding her mini-poster of La Boriqueña, her own big black hair cascading down her brown shoulders.

“It feels amazing to be represented,” says Jasmin, 22, who is Francia’s niece and Bajan and Puerto Rican.

Jasmin’s black box braids spill out from her ponytail on top of her head, the occasional braid donning a small round gold accessory, like a mini-crown.

It was her idea to attend the festival, and she beams while showing off the large La Boriqueña poster, her blue shorts with the words “Puerto Rico” etched on the bottom peaking out beneath.

“It gives children who don’t have the typical Latina ‘look’ — always usually light skin, [having] straight hair — a chance to be represented,” she tells theGrio. “Because when you go to the country of Puerto Rico, a lot of them look like me and [Francia].”

Afro-Latinos — or Black people with Latin ethnicity and cultural roots– are not a new population.  Since the days of the trans-Atlantic slave trade, when Africans who survived deadly boat rides were shipped throughout the Caribbean and North and South America, Afro-Latinos have contributed and given birth to much of what we understand as “Latin” culture today, from music to food to spirituality.

Yet somehow, Black Latinos are rendered so invisible in media and popular culture representations, that even some Afro-Latinos themselves don’t know — or want to be perceived as Black.

“She is living in a country, in a nation, in world that’s dominated by Eurocentric standards of beauty,” says Miranda-Rodriguez, addressing the Black Latinas that inspired his creation of the character.

“That are telling her to straighten her hair… lighten her skin… teaching her makeup methods so that she can hide her Africanness through contours that are forcing our young women to consume brands so that they can hide their natural beauty.”

But at the Afro-Latino Fest, which ran for its second year last weekend, Blackness is centered, affirmed and celebrated.  The podcast speaker series, live music performances and vendors, led to a sold-out Saturday at the festival this year.  It’s exactly why Miranda-Rodriguez chose to set up a vendor booth.

“A lot of times, Puerto Ricans especially, we hide and we shy away from our Africanness. So in creating this character, yeah she’s a Puerto Rican superhero but I celebrate her blackness.”

Marshalla Ramos Inde, another vendor at the Afro-Latino Fest is selling products from her apothecary company, with small green portrait of two Black women wearing Puerto Rican flag dresses sitting on the table.

Ramos Inde’s small dreadlocks sit under a headband and she looks out through her glasses, thinking back to how embracing her Afro-Latina identity wasn’t always supported by others.

“I will be honest. From my father’s side of the family I have not been as embraced until recent years. They’re lighter skinned, most of them,” she explains.

While attending high school in a Cuban community in Florida, Ramos Inde explains that she often was tested and treated as an outsider, despite being Latina.

She cites African-American scholar W.E.B DuBois’ “double-consciousness” as the perfect example of her challenges.

“In friendships it’s been like a catch 22, where [I’m] not fully embraced by either in many ways. It’s a beautiful struggle. I push through and that’s why I’m here.”

“[Afro-Latinidad] is embracing all that is you. That comes from many cultures and ethnicities but also it’s a deep pride in our African heritage and not afraid or ashamed to say, ‘I have African roots.'”

Despite being Black all their lives, many Afro-Latinos are just now being introduced to the idea of identifying with their race more than their ethnicity.

The increasing popularity of the term “Afro-Latinx” has created a demand for more events, panels, forums and even products to show Black pride.

“I would say more in the past five years, just embracing more of that side of me,” says Crystal Garcia, owner of Lateena Tees, a t-shirt company with empowering messages for Latinas.

Garcia is fair-skinned with 4C textured hair, which she says she purposefully wears in a curly afro now.

“The natural hair [is] because I was always wash and set every two weeks,” Garcia tells theGrio. “Going to the Dominican Republic and learning about that part of my family and history… It’s important to me to just learn about all of my heritage.”

Even Jasmin and Francia, work it out in real time when asked what it means to be Afro-Latina.

“First I had to ask her what Afro-Latina means and it’s usually based on the looks, not really your background? Is that what you said?” asks Francia while looking at her niece.

Many Latinos, have been believed in the widely perpetuated narrative they are all a mix or “mezcla” of African, Taino native and Spanish European roots, with some even claiming Afro-Latino identity but not actually presenting as Black.

For Francia, she has felt the difference as a Black Latina.  Oftentimes she gets ignored in groups of Latinas until she starts speaking Spanish.

But during the Afro-Latino Fest, no explanation is needed.  And it makes the journey ahead much clearer.

“I feel like I know more about myself because before it was a big question mark, like ‘I know I’m Latina but where is my background? Where is the other people who look like me at?’ And now I know: this is my community.”