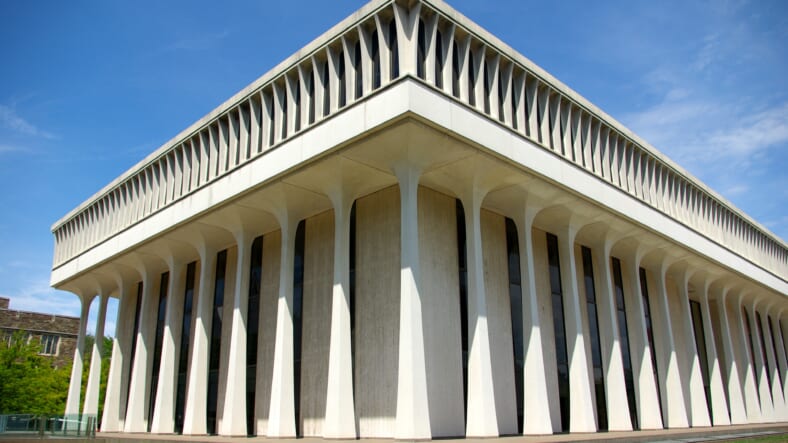 Princeton University will remove the name of its 34th president, who once blocked Black students from enrollment.

As of June 29, President Woodrow Wilson‘s name is no longer welcomed at Princeton University.

The Ivy League school has recently announced that it will take steps to remove his name from the school of public and international affairs and one of its residential colleges, despite the prestige Wilson brings to the school’s history.

After his tenure at the institution, he became the 28th president of the United States.

The decision was announced after students and alumni wrote letters and made calls.

The #PrincetonU Board of Trustees has voted to remove Woodrow Wilson’s name from the School of Public Policy and International Affairs and residential college. https://t.co/rt17hfDCk2

“We have taken this extraordinary step because we believe that Wilson’s racist thinking and policies make him an inappropriate namesake for a school whose scholars, students, and alumni must be firmly committed to combatting the scourge of racism in all its forms,” the university said in a statement following a vote by the board of trustees Friday.

However, the removal of Wilson from the privileged New Jersey college is not a new conversation. Over the last ten years, students have protested in various ways, asking the institution to remove his name from the school.

In April 2016, a 10-member trustees committee decided not to remove his name but committed to doing an extensive study on his racist legacy.

The Philadelphia Inquirer has reported that other colleges are also working hard to reconcile their institution’s “racist pasts” by changing names of buildings, apologized for their hands in slavery, offering scholarships, and creating solid curriculums.

The nation’s current culture of reform has had many rethinking about who should be honored, remembered, and what images represent an inclusive America. This has resulted in the takedown of Confederate leaders’ statues, and the canceling of actors and influencers who have been portrayed in Blackface.

According to the Daily Princetonian, the student newspaper, more than half of the school’s current class in the public affairs school and about three-quarters of its class of 2020 signed a petition to remove Wilson. Graduate students and alumni signed another petition.

“We condemn this School’s complicity in this country’s violent history of white supremacy through its perpetuation of the legacy and iconography of Woodrow Wilson,” students wrote.

The School District of Philadelphia has the former president’s name on a middle school. When questioned about whether Wilson’s name would be removed, a spokesperson did not immediately respond, according to the Inquirer.