A north New Jersey woman earned the ire of her community in a confrontation with a Black couple after she questioned their right to build a patio. 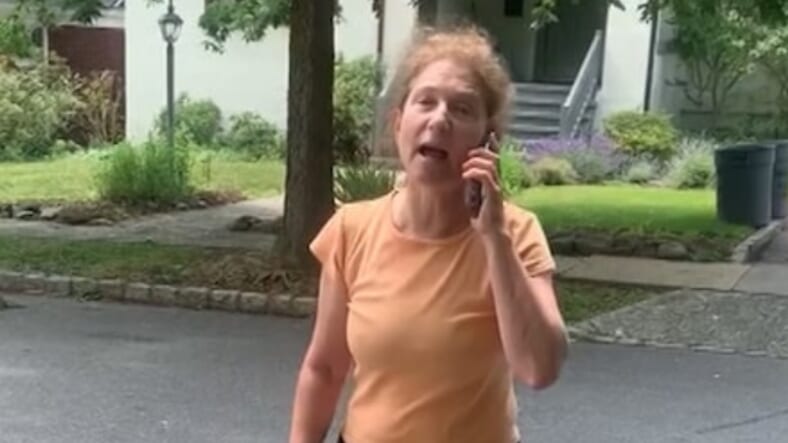 There is yet another white woman to add to the “Karens Gone Wild” saga as one in Montclair, New Jersey called the cops on her Black neighbor for assault.

Fareed Nassor Hayat began his Facebook post with “It has happened again” and shared how his neighbor, Susan called the cops on him on Monday. She falsely accused the lawyer of assault after walking onto his property “three times in 30 minutes demanding to know” if he had the authority to install a stone patio.

No permit is required to do so, but that did not stop Susan from harassing Hayat, his wife Norrinda Brown Hayat, and their two sons.

It has happened again. White entitlement and black hate embodied in Susan who lives on Marion Road and works at the EPA,…

In the video of the incident, Susan is walking up and down the street and claimed, “you pushed me off your property.”

A woman’s voice responded that Susan “You’ve been harassing us for two years” and directed her husband to “Please go inside so our children don’t have to see the police.”

Hayat shared the video on Facebook and it’s since gone viral.

“It has happened again. White entitlement and black hate embodied in Susan who lives on Marion Road and works at the EPA, called the police to lodge a false report of assault against me when told to leave our property,” his post began.

Hayat continued by calling her “Permit Karen” and said she then decided to come on his property to check the situation out for herself.

“When asked if a permit was required by law, she said she didn’t know, but insisted we answer her questions and submit to her demands, or she would call the police to force us to stop improving our home,” he wrote.

The situation escalated when Susan was challenged on her right to dictate what Hayat could do on his property. That is when she decided to call the cops on him.

“She invoked centuries of brutality in her call to the police and sought to put her Black neighbors back in their place. She believed that we were required to answer her questions and smile while doing so. But to her surprise, her efforts were met by two proudly Black human beings, parents, lawyers, law professors, activist, community members, neighbors, citizens and fighters, who refused to submit,” his post continued.

“Her efforts were also met by a collection of largely white neighbors, who refused to simply go along with her racist efforts or not stand up against her attempt to invoke the racist power of the state through police.”

The Montclair police confirmed that the altercation was under investigation as neighbors were upset that it happened. There were just recently peaceful Black Lives Matter protests and the community prides itself on its diversity.

“This is the one place I feel safe; for this to happen here now is just unacceptable. It’s unacceptable anywhere, but we have a history of living together and trying to do the right thing,” Novelist Benilde Little told NorthJersey.com.

After the video was posted, students showed up to march outside Susan’s home.