At 74-years-old, the politician is in the high-risk group for contracting the deadly contagion. He is also a cancer survivor. 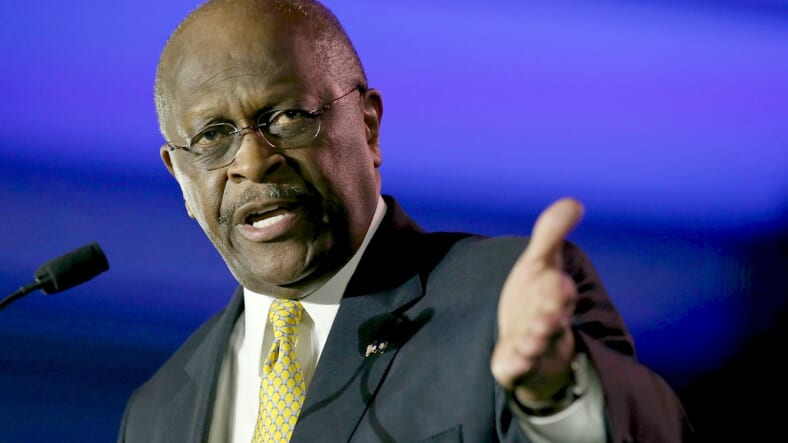 Herman Cain has been hospitalized with COVID-19 at an Atlanta-area hospital, where he is reportedly “alert” and doing well.

He tweeted a photo of himself in the stands showing he was not wearing a mask and not social distancing. The image was captioned: “Here’s just a few of the #BlackVoicesForTrump at tonight’s rally! Having a fantastic time!”

At 74-years-old, Cain is in the high-risk group for contracting the deadly contagion. He is also a cancer survivor.

The politician reportedly did not meet with the president at the Tulsa rally, but eight members of Trump’s advance team have also tested positive for the coronavirus, Washington Post reports.

We are sorry to announce that Herman Cain has tested positive for COVID-19, and is currently receiving treatment in an Atlanta-area hospital.

Please keep him, and all who are battling this virus, in your prayers.

Our full statement appears below. Updates to follow. pic.twitter.com/lDRW7Rla4e

Cain was hospitalized Wednesday after developing “serious” symptoms but is “awake and alert,” according to a statement on his official Twitter account.

“There is no way of knowing for sure how or where Mr. Cain contracted the coronavirus, but we do know he is a fighter who has beaten Stage 4 cancer,” the statement says.

Ironically, less than 24 hours ago, Cain posted that “masks will not be mandatory” at Trump’s upcoming Mount Rushmore rally in South Dakota and that “People Are Fed Up” with social distancing.

Cain wrote an op-ed about his experience in Tulsa, which saw only a little more than 6,000 people fill an arena that holds 19,000.

“The atmosphere was electric, and the president’s words were inspiring,” he wrote in the Western Journal. “He presented a vision for uniting the country, overcoming the remaining effects of the pandemic and reinvigorating an economy he had going strong before the coronavirus showed up.”

Trump’s campaign spokesperson, Tim Murtaugh, insists that Cain did not meet with the president at the event, or any other senior campaign or administration officials.

Masks will not be mandatory for the event, which will be attended by President Trump. PEOPLE ARE FED UP!https://t.co/Oykdz4xThD

Murtaugh noted that “contact tracing was conducted after the Tulsa rally but we do not comment regarding the medical information of individuals.”

“We honestly have no idea where he contracted it. I realize people will speculate about the Tulsa rally, but Herman did a lot of traveling the past week, including to Arizona where cases are spiking,” said Dan Calabrese, editor of HermanCain.com, said Thursday in a post on Cain’s website.

“I don’t think there’s any way to trace this to the one specific contact that caused him to be infected. We’ll never know,” he added.