Her mother was told they don't support 'political' messages 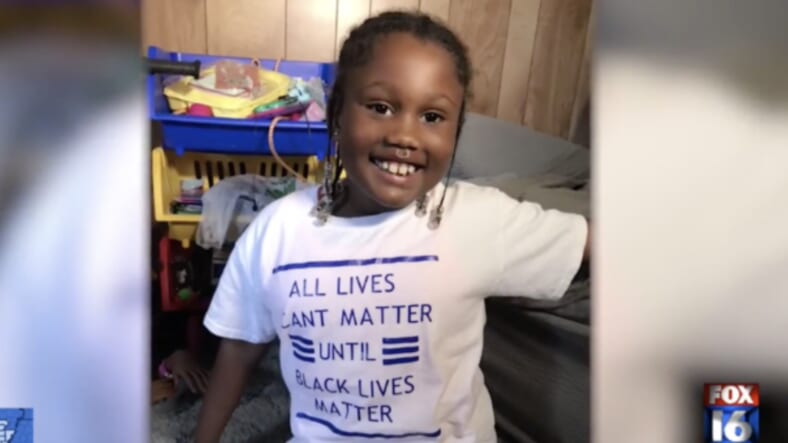 A mother in Arkansas is alleging her 6-year-old daughter was kicked out of her daycare because she wore shirts that supported Black Lives Matter and racial justice.

Journei Brockman has attended daycare at His Kids Preschool, a Christian facility, for the past six months in Russellville, Ark. But last Friday, the kindergartener was told not to return, Fox16 reported. She was accused of “encouraging racism” because she wore a Black Lives Matter shirt and another that featured a raised Black fist.

“She asked me Friday, ‘Can I go back?’ No, you can never go back,” Journei’s mom, Deval Brockman explained to the station.

The issue began last Thursday when the little girl went to school with a shirt that stated All Lives Can’t Matter Until Black Lives Matter. An official from the preschool called to complain about her clothing.

“She was like ‘I don’t like it, I don’t agree with it’, and I would prefer it if you didn’t send her to school in it again,” Brockman said.

Brockman continued that she called the state to find out if there were any policies regarding attire. She was told that the only rule on clothing was that it not have profanity.

The following day, Journei was sent to the preschool with a raised fist printed on the back of her shirt. It angered administrators who insisted the shirts were encouraging racism.

“I got very upset. I’m just like are you serious? Over a T-shirt?” she went on.

Her parenting was also called into question.

“He was like, ‘I am not going to tell you how to raise your child but you need to reevaluate how you’re parenting her,’” said Brockman.

The school issued a statement in which they maintained that school was not an appropriate place for any type of messaging. They denied race played a factor in their decision to expel the little girl.

“We feel a childcare environment is not a place for a parent’s political views to be addressed or played out, regardless of race,” Patricia Brown, director of His Kids Learning Center.

Brockman disagreed. She doesn’t see her or her daughter’s life as “political” but as a matter of equality. She felt that the school was failing to live up to its ideals.

“If you’re going to a Christian led daycare, let’s abide by the Bible then,” said Brockman.