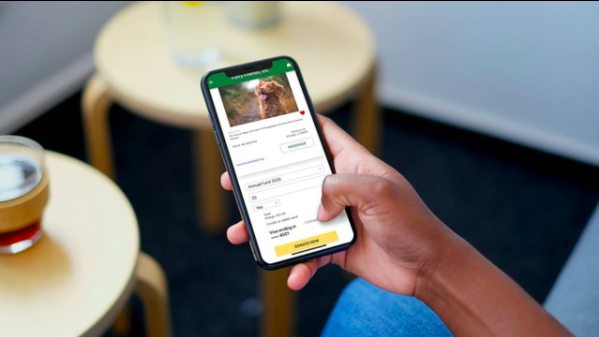 The Givly app is pictured in an Instagram photo. (Credit: Instagram/@givlyapp)

The Givly App is more than just a tech company.

In 2018, the Givly App was launched by Tiffany Williams. The purpose of the app is to encourage young donors to give back. The expert fundraising and development consultant spoke with theGrio via Instagram Live to discuss more about the app and its HBCU giving challenge.

Williams first began developing the app after someone posed a question to her while she was at a speaking engagement. The panel was centered on finding ways to engage young donors instead of relying on older methods, such as writing checks and sending via the mail.

“Unfortunately, a lot of nonprofits were still trying to engage folks that way. So my thing is always meet people where they are,” Williams said. “You know, you can’t keep doing the same thing and expect a different result. So that really is what was the impetus for Givly. I was on a plane a couple of days later, and I started jotting down ideas like, ‘You know, if I could build a giving app, what features would it have?’

Read More: The beat of a culture: how HBCU bands relate to Black music legacy

She continued, “So from there, that was more than two years ago. So I had created the company, incorporated, did all the legal stuff, but I still needed to build the app. …It took a full two years with fits and starts, and all this kind of great stuff. But finally, we launched in the Apple iOS and Google Play store is just a couple of weeks ago, and the engagement has been really good.”

Williams also explained the unique features the app has to encourage those to be more intentional with their giving, especially when it comes to philanthropy.

“We built in some features to kind of support intentional philanthropy, like setting a giving goal.  So you go into the app, you can create/set a giving goal,” explained Willaims. “Every time you make a donation through the app, it tracks toward that giving goal. So it kind of helps you say, like, ‘I want to give a thousand dollars away this year. How am I doing towards that? How am I investing in causes that create impact in my community.’”

The app launched an HBCU giving challenge on Juneteenth to bring attention to the need for philanthropic investment dollars. As an HBCU Alum and graduate of Florida A&M University, Williams was inspired to start the challenge to encourage more HBCU alums to give back to their universities and colleges.

The FAMU Alu, also stressed the many different reasons she chose to launch this challenge.

“We wanted to make sure that people, when they start thinking about their philanthropy, are including these HBCUs in it,” Williams shared. “So, sure, you can give to your church and you can give to a homeless shelter down the street in your community. But, you know, don’t forget about other institutions who need it. So when you’re counting on your philanthropic dollars, make sure that HBCU giving–if that’s your affinity–is included in there.”

The challenge officially concludes Tuesday, July 10, but you can find out more via givlyapp.com.