James 'Jay' Garcia has been identified as the victim 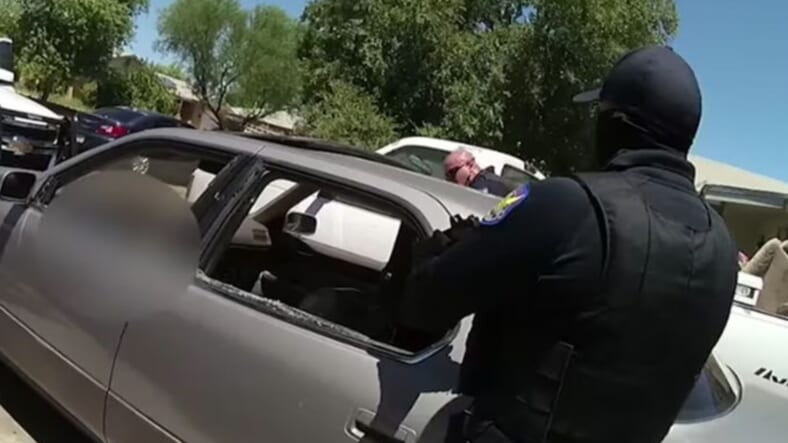 In what has become an all too common occurrence, protests have been sparked in Arizona after a video was released that shows Phoenix police officers fatally shooting a man inside a parked car.

According to CNN, in the footage police can be heard threatening to shoot the man before opting to fire a barrage of bullets into the vehicle. Authorities claim officers only fired after the man, who has been identified as James “Jay Garcia, refused to drop a gun and pointed it towards them. But the victim’s sister disputes allegations that he had a gun.

Monday after the Phoenix Police Department released video from the body camera of an officer who arrived on the scene after the shooting. In the video, the officer wearing the camera reaches into the car where the Garcia, 28, was sitting and pulls out a gun.

The Maricopa County medical examiner’s office has yet to release information about the manner of his death or the autopsy results. But as this was the 28th officer-involved shooting in Maricopa County this year, protests from the distraught community was inevitable.

“As we continue to see, they’re not hearing us, so we are going to be out here every day and we are going to utilize every disruptive, non-violent demonstration tactic that we have in order to make sure that they hear us loud and clear,” protester Jacob Raiford told local station KPHO/KTVK.

In a Facebook post, City Council member Carlos Garcia criticized the police’s use of force in the incident and cast doubt on their description of events. The council member, who is not related to the victim, opined, “It does not shock us that despite all the scrutiny from community Phoenix PD continues to respond violently to calls. But, we must all continue to ask for transparency and accountability,”

“The department also issued a premature statement leaving out facts about the case,” he continued. “We cannot allow for dishonest narratives to be built by violent departments. We will continue to call for independent investigations into officer-involved shootings.”