The Martinez Police Department is currently investigating the matter. 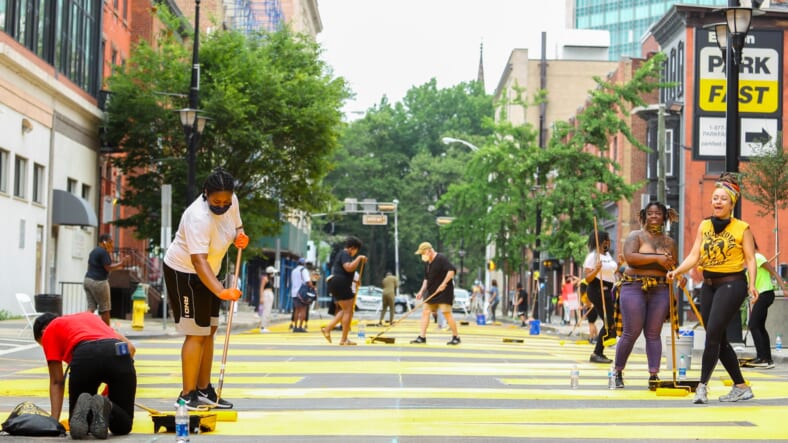 An unidentified white couple was recorded painting over a Black Lives Matter street mural located in front of a Bay Area courthouse.

In the video, the couple argued with activists, saying “all lives matter” and that getting killed by the police is a consequence of disobedience.

While the mural was authorized to be painted at the Martinez, California courthouse, the couple attempted to erase the tribute with black paint.

“No one wants Black Lives Matter over here, get the fuck outta here,” the man said. “All lives matter, you fuckin’ punk. The only reason why you are crying that white people practice police brutality, [is because] people were resisting arrest.”

“Don’t have a run in with the law and don’t resist arrest, and there won’t be a problem,” he continued.

A female bystander engaged in a heated conversation with the man, and used George Floyd as an example of the issues at hand.

Today in Martinez- Minutes after a #BLM mural was painted, this couple came to paint over it. The mural organizer says he’s confident that these are the same people that were antagonizing them while painting. After the vandalism, the mural was quickly saved. #NEWS #4thofJuly pic.twitter.com/1NaPMj8yEb

“I can’t believe that this is happening right in front of my face,” another bystander told NBC reporters. “I expected something to happen, but when I saw this, I got a little excited and tried to make sure and get it in and film everything that happened.”

Local activists managed to record the license plate number of the couple’s truck before they drove off.

The couple only managed to ruin the B and L in the Black Lives Matter mural before an activist took the bucket of paint away from them.

The Martinez Police Department is currently investigating the matter.