The damages resulting from Minneapolis' unrest is established to be more than $500 million. 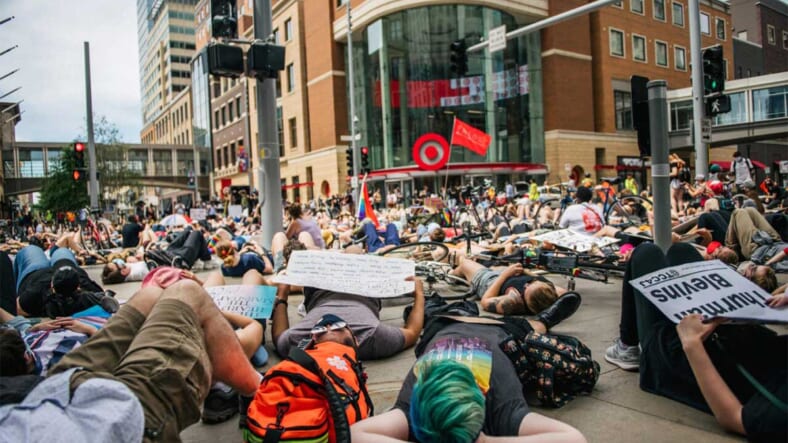 Caption: Demonstrators lie down in silence during a Pride march on June 28, 2020 in Minneapolis, Minnesota. (Photo by Brandon Bell/Getty Images)

After experiencing fires, looting and vandalism in the wake of George Floyd’s death, Minnesota Governor. Tim Walz will not get assistance from the Trump administration.

The federal government has denied the Minnesota governor’s request for assistance in rebuilding and repairing the state’s infrastructure. The exact reason is currently unknown.

The damages resulting from Minneapolis’ unrest is established to be more than $500 million, with more than 1,500 buildings damaged, The Star Tribune reported.

Yet, when Walz requested President Donald Trump declare Minnesota a “major disaster” through FEMA, he was rejected after only 8 days of filing for help.

On Friday, Teddy Tschann, the governor’s spokesman, confirmed that the request for federal aid was denied.

“The Governor is disappointed that the federal government declined his request for financial support,” Tschann said in a statement. “As we navigate one of the most difficult periods in our state’s history, we look for support from our federal government to help us through.”

The Trump administration’s rejection is a hard hit to many small grocery stores, pharmacies and post offices that were caught in the chaos.

According to Walz, his city’s destruction is second only to the 1992 riots in Los Angeles.

Tom Emmer, a Republican House member, also sent a letter to Trump, urging him to do a “thorough and concurrent review.”

“If the federal government is expected to assist in the clean-up of these unfortunate weeks, it has an obligation to every American — prior to the release of funding — to fully understand the events which allowed for this level of destruction to occur and ensure it never happens again,” Emmer wrote, according to The Star Tribune.