Twitter is not certain what type of information was stolen during the hack, and data breach 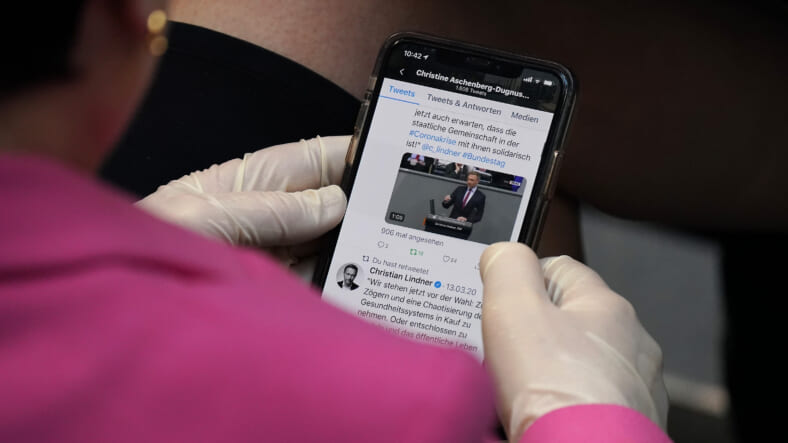 A member of the Bundestag wears protective gloves as she follows a Twitter feed on a smartphone. (Photo by Sean Gallup/Getty Images)

Twitter also stated that eight non-verified accounts were specifically targeted. Hackers were able to download these users’ data using a tool that includes an archive of private messages, CNN reported.

It is not confirmed whether or not the high profile users’ data was downloaded.

It is not certain what type of information was stolen during the data breach but considering some of the most influential politicians use Twitter as a means of public and private communication, members of Congress and cybersecurity experts are worried about the incident.

About 130 accounts were targeted during the hack, Twitter said. The attackers were targeting Twitter’s employees, so as to gain access to Twitter’s internal systems.

“The attackers successfully manipulated a small number of employees and used their credentials to access Twitter’s internal systems, including getting through our two-factor protections. As of now, we know that they accessed tools only available to our internal support teams,” Twitter said.

Twitter is removing tweets with the images of its alleged internal control system. A Twitter spokesperson told CNN the screenshot had personal or private information.  However, the spokesperson did not verify whether the images were Twitter’s internal system.

READ MORE: Meghan Markle flies to NYC to support Serena Williams in U.S. Open Final, but with one change

A former Twitter told CNN the internal system is often referred to as “agent tools” by the staff. The agent tools purpose is to assist with customer support requests and moderate content, according to CNN.