Without help, evictions loom for millions as deadline nears

The federal moratorium on evictions is set to expire on Friday 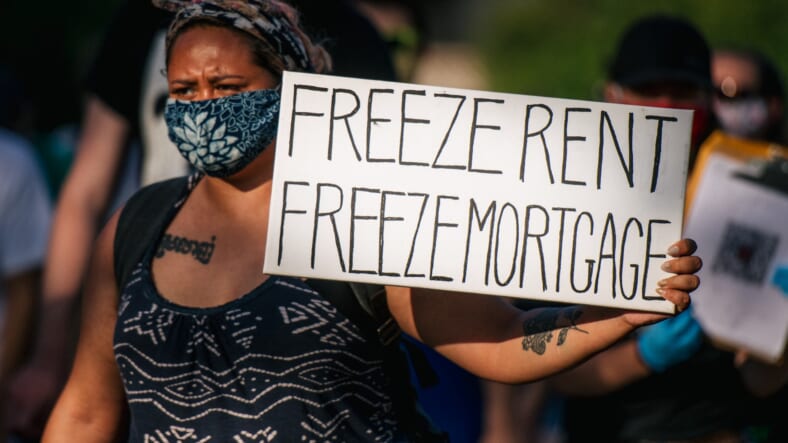 A woman holds a sign up as demonstrators march in the street during the Cancel Rent and Mortgages rally on June 30, 2020 in Minneapolis, Minnesota. (Photo by Brandon Bell/Getty Images)

Twelve million Americans may be out on the streets if something isn’t done to help with a federal deadline looming say housing experts. On Friday, the federal moratorium on evictions is set to expire. With Congress still working to come to an agreement on the next economic stimulus package and with unemployment at 11%, renters are scared of what’s next.

“So before the pandemic, the majority of renters below the poverty line were already spending half of their income on housing costs or more. And 1 in 4 of those families were spending over 70% of their income just on rent and utilities. When you’re spending 70, 80% of your income on rent and the lights, you don’t need to have a big emergency wash over your life to get evicted. Something very small can do it.”

African American and Latino renters were particularly vulnerable as less of them are homeowners compared to whites, Desmond added.

The CARES Act, passed in the wake of millions of pandemic related job losses, includes a provision to stave off any evictions for landlords who own homes with federally backed mortgages. But as of this Friday, landlords can file 30-day notices and move to evict after that time period expires.

An extra $600 in federal unemployment benefits is also set to expire on July 26, leaving still unemployed workers with a deficit that may be impossible to fill without federal action. Congress goes on leave for a month on August 7 and has yet to announce the details of the next economic stimulus package.

That has tenants and housing rights activist understandably concerned.

“We are looking at an eviction cliff, and once we fall over it, it will be hard to climb back,” David Dworkin, president of the non-profit National Housing Conference told The Washington Post. “I am troubled about August and I am terrified about September,” he said. “A rental moratorium kicks the can down the road.”

But landlords say keeping renters from paying causes them financial distress as well and are suing across the country to block rent moratoriums.

“If the government feels that renters should have a moratorium, the government should pay for it,” landlord Stephen J. Lehrman told the Post. He owns apartment buildings in Westchester County, N.Y. and is suing to stop a moratorium. “Why is rent the only payment that is being singled out for cancellation?”

According to CNET, Treasury Secretary Steven Mnuchin wants to see a bill for the president to sign by July 31 but Republicans and Democrats remain divided on whether to extend federal unemployment that allowed for the extra $600, retain the supplemental funding at a lower amount, provide a second stimulus check or determine other financial incentives for employers and workers.

If you need information on landlord/tenant laws in your state, here’s a reference that covers laws in all 50 states and Washington, D.C.