Strikers are livestreaming their journey on Facebook, popularizing the hashtag #NoJusticeNoFeast 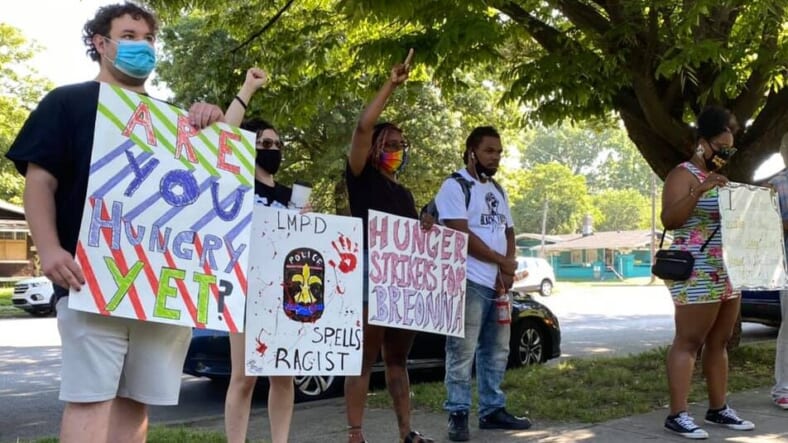 Four protesters in Louisville, KY began the “Hunger Strike For Breonna” on Monday.

Ari Maybe, Amira Bryant, Vincent Gonzalez, and Tabin Ibershoff held a press conference on Sunday to launch their demonstration to the world. Their mission is to bring justice in the memory of Breonna Taylor, a woman shot dead in her home by police-fire this spring.

According to The Hill, Maybe, Bryant, Gonzalez, and Tabin will not eat any food until the three police officers who shot and killed Taylor during a house raid face consequences for her death.

Bryant stated, “The hunger strikers for Breonna demand the continued firing and removal of pensions of the three Louisville Metro Police Department officers who murdered Breonna Taylor in her home on March 13 of this year.”

“In an act of protest and to achieve our goal we will abstain from caloric intake indefinitely. We demand justice for Breonna Taylor and her family,” Bryant continued.

Only one of the three officers involved in the shooting has been terminated, Brett Hankison. The other two, Myles Cosgrove and Jonathan Mattingly, continue to work their normal shifts as LMPD police officers.

The strike will be live-streamed on their Facebook page, Hunger Strikers for Breonna and they are encouraging supporters to use the hashtag #NoJusticeNoFeast.

According to The Courier, there are approximately 35 people helping out on all fronts to ensure their success. As far as their daily intake, the quad will only consume vitamin supplements and only drink water, green tea, and black coffee. They will also have access to medical attention as needed.

In support of their efforts, the team behind this strike organized a Facebook fundraiser with a goal of $2,300.

“We are asking for a love token to support a collective space for the hunger strikers, medical supplies, and support,” the team has requested via the “Hunger Strikers for Breonna” Facebook page.

This demonstration came during an elevated time of racial discourse in America. Various forms of protest continue to take place in response to the police killings of unarmed Black people such as Breonna Taylor, George Floyd, and Rayshard Brooks.

The hunger strike began Monday at noon, on the same day as the “Strike for Black Lives.”