Black America is still mourning the death of civil rights icon Congressman John Lewis — but few people knew him as well as his friend and colleague, Rep. Jim Clyburn (D-SC).

Clyburn, the highest-ranking Black person in the House of Representatives, recently sat down with theGrio to share his thoughts on Lewis’ legacy and their very last conversation before his death. 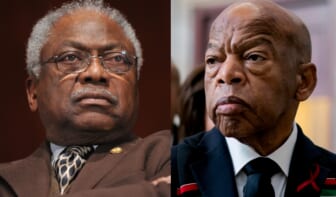 The House majority whip said that he and the civil rights activist often talked about the rise of the Black Lives Matter movement, which he says Lewis was proud to witness decades after he and countless others sacrificed their bodies for racial equality in America.

Lewis notably suffered skull fractures after being brutalized by state troopers in Selma, Alabama in 1965 on the Edmund Pettus Bridge during a demonstration that is historically referred to as Bloody Sunday.

“He was very, very impressed and pleased with the breakthrough that the Black lives movement was having. And we talked about its comparison to what he and I did back in the 1960s together,” Clyburn told theGrio.

“We woke up one morning and a new headline was ‘Burn, Baby, Burn’ … that destroyed the movement.”

A new refrain from activists fighting for Black lives has since emerged as of late, Clyburn points out: defund the police.

“Both of us knew [defund the police] could very well do to Black Lives Matter what ‘Burn, Baby, Burn’ did to the Student Nonviolent Coordinating Committee. And both of us spoke out against that kind of slogan,” Clyburn said.

The South Carolina congressman said he spoke with Lewis just a few days before his death. “We expressed our love for each other. And I knew deep down inside that I was talking to him for the last time,” he shared.

Since Lewis’ passing, Clyburn and others have called for the political giant to be honored by having the Edmund Pettus Bridge renamed after him. The bridge is currently named after former Alabama U.S. Senator Edmund Pettus, who was a grand dragon in the Ku Klux Klan. A petition to name the bridge after John Lewis has since garnered more than 500,000 signatures.

Read More: Why the Edmund Pettus Bridge should be named after John Lewis

“I think it’ll be a good thing for Selma,” Clyburn said, “it’s good to have something to break with the past.

“Every time I look at that bridge, it’s just something about that bridge that doesn’t seem right. They ought to spruce it up, put John Lewis’ name on it … I think it could be a turning the page.”