'We cannot settle for spectacles that endanger us all,' Portland NAACP President E.D. Mondainé writes in the Washington Post 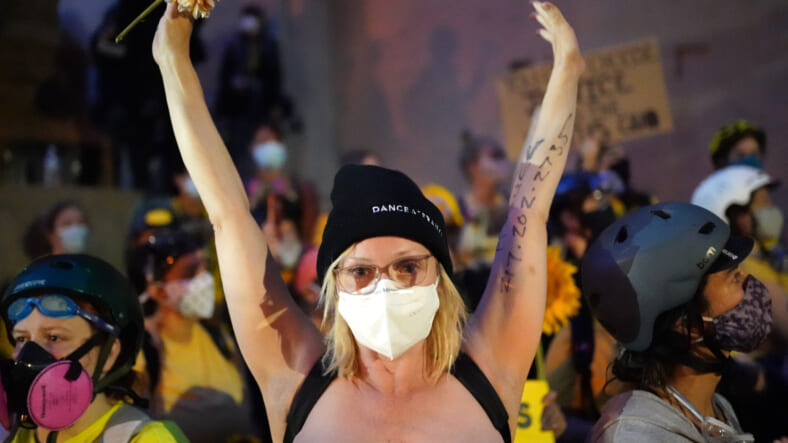 A topless protester holds a flower in the air in front of the Mark O. Hatfield U.S. Courthouse on July 23, 2020 in Portland, Oregon. (Photo by Nathan Howard/Getty Images)

Protests in Portland, Ore. have been going on since George Floyd‘s death in late May.

However, demonstrations in the West Coast city did not gain national attention until recently with the sight of a nude White protester and news of federal agents in unmarked vehicles detaining people.

Some local Black community leaders feel that the demonstrations, which originated as rallies against racism and police brutality, have now lost their focus.

One of those leaders, Portland NAACP President E.D. Mondainé, called it a “white spectacle” in a Washington Post op-ed published Thursday.

“We cannot settle for spectacles that endanger us all. This is a moment for serious action — to once again take up the mantle of the civil rights era by summoning the same conviction and determination our forebears did,” Mondainé wrote.

Mondainé criticized the presence of select White entities — leftist and anarchist White groups causing violence, the aforementioned “Naked Athena,” a White “Wall of Moms” and, chiefly, the federal agents — that have stolen the shine off what was initially demonstrations for Black Lives Matter.

READ MORE: Portland protesters slam Trump, federal agents: ‘This is not a dictatorship’

Mondainé did not denounce the overall presence of White people at the protests, as long as they’re there for the right reasons. He did say, however, that the weeks of protests have devolved into a White “spectacle” as government buildings have been damaged and objects have been hurled at law enforcement, causing a distraction.

“We welcome our white brothers and sisters in this struggle. In fact, we need them. But I must ask them to remain humbly attuned to the opportunity of this moment — and to reflect on whether any actions they take will truly help establish justice, or whether they are simply for show,” said Mondainé, who has led the Portland chapter of the civil rights organization for more than two years.

With media attention and coverage now focused on the federal agents deployed to Portland and the leftist agitators, issues affecting Blacks outside of police brutality must be addressed, Lakayana Drury, executive director of the Portland non-profit Word is Bond, said.

“I want us to remember why we’re here,” Drury told protesters on Thursday, according to NBC News. “What’s happening downtown is not a Black issue. This is a battle between two white supremacy entities — the Trump administration and the local city of Portland.”

Black people only account for 6% of Portland’s population, according to U.S. census data..

“The Black issues exist very far from here,” Drury said. “It’s in the classrooms when we have Black students in 8th grade who are not at an 8th grade reading level. That’s what we should be marching for.”