Unemployment benefits are making people stay at home, according to Republicans

The $600 federal unemployment payment will expire on July 31. 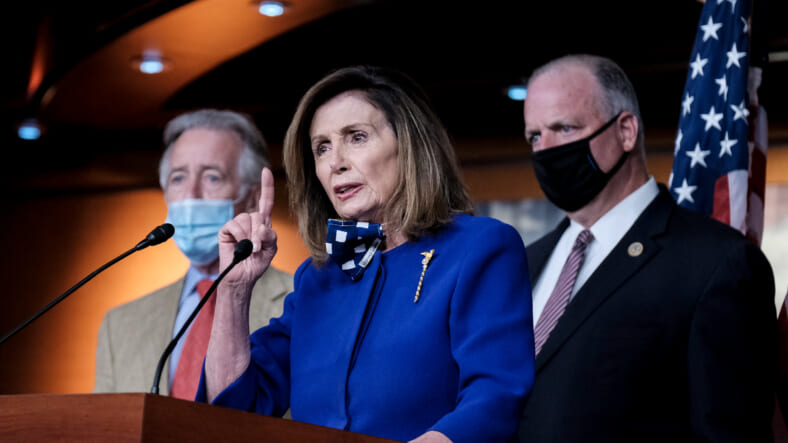 U.S. Speaker of the House Rep. Nancy Pelosi (D-CA) speaks during a news conference on July 24, 2020 in Washington, DC. House Democrats urge House Republicans to extend unemployment benefits that was passed as part of the CARES Act which is due to expire on July 31, 2020. (Photo by Michael A. McCoy/Getty Images)

Republicans like Treasury Secretary Steven Mnuchin believe that the $600 weekly benefits that are being given to unemployed Americans, are causing people to stay at home and not look for work.

“We want to make sure that there’s a technical correction, so that people don’t get paid more money to stay home than to work,” Mnuchin said.

“The original unemployment benefits actually paid people to stay home and actually a lot of people got more money staying at home than they would going back to work,” Meadows said, in an interview on ABC’s This Week.

Mnuchin said that he spoke with House Speaker Nancy Pelosi on Friday about negotiating a partial extension of employment benefits that would last until the end of the year.

The Trump administration and many Republicans want an extension of benefits that would replace 70% of wages that a person would have made if they were still employed.

Pelosi, alongside other Democratic leaders, do not want a short term extension nor do they want a reduction.

“The reason we had $600 was its simplicity,” Pelosi said from the Capitol, The Morning Call reported.

The $600 unemployment benefits will expire on July 31, and those without jobs will have no additional assistance during the pandemic.

“We don’t want a short-term extension either, we want something till the end of the year,” Mnuchin said.

Meadows and Mnuchin revisited Capitol Hill to apply “final touches” on a $1 trillion bill, which is expected to be announced on Monday, Politico reported.