Stanley Gracius, 37, was tased and tackled to the ground by Wyomissing, Pennsylvania police 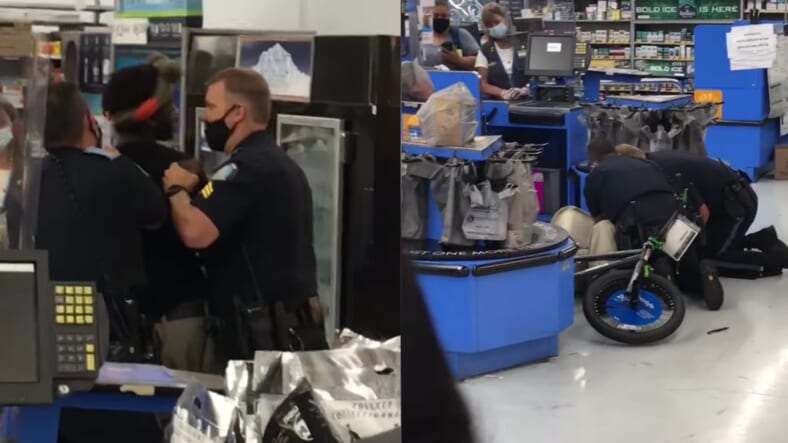 Stanley Gracius, 37, is tased and tackled to the ground before his arrest after riding bike inside Walmart in Wyomissing, Pa. (Photo: Facebook/Smula)

The preliminary hearing for Stanley Gracius, the Black man arrested in a Walmart store captured on video that has since gone viral, has been postponed.

Gracius, 37, requested that his hearing be pushed back to allow more time for his attorney, Daniel Nevins, to review the case.

According to Reading Eagle, Gracius was arrested last week at a Walmart in Wyomissing, Pennsylvania, after engaging in a series of actions that a store clerk deemed as disruptive.

Police received a call from the location’s management, reporting that a man was allegedly riding a child’s bike up and down the aisles of the store, playing loud music, and verbally harassing other customers.

An initial video with no audio was released by the Berks Country District Attorney’s Office, where Gracius can be seen riding his bike around the store.

Surveillance video shows him purchasing the bike moments before he is confronted by police. That is when others started to record the encounter in which Gracius was tased and tackled to the ground, sparking protests and accusations of racial bias.

According to officials, he was approached for refusing to provide identification. The incident escalated when a manager from the Walmart requested identification from Gracius to legally ban him from the store, but he reportedly refused to comply.

He eventually rode the bike to the front of the store to purchase it for his son. Video footage shows Gracius repeatedly asking the officers why he was being detained, stating he had a receipt and had not done anything wrong.

He was later released from police custody on bond.