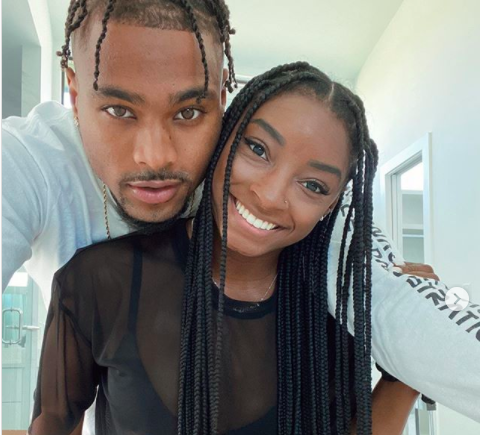 Simone Biles and Jonathan Owens are pictured in an Instagram photo in July 2020. (Credit: Simone Biles/Instagram)

The four-time Olympic gold medalist, 23, confirmed her relationship with the NFL player, 25, in a series of social media snaps on Sunday.

“It’s just us,” she captioned the photos, which showed Biles and Owens cozied up together in one picture and Owens planting a kiss on the gymnast in another.

The Instagram debut comes just a few weeks after Biles shouted out the pro-athlete on his birthday. In a photo posted by The Shade Room, Owens is shown giving Biles a piggyback ride as she smiles from ear to ear. A follow-up video shows Owens dancing as Biles laughs out loud.

“Happy 25th Birthday. Hope this year brings you everything you want & more,” she wrote alongside the Instagram Story pic.

Biles’ new romance follows her breakup from fellow gymnast Stacey Ervin Jr. The former couple, who began dating in 2017, called it quits in March, Biles revealed to Vogue. The Olympic superstar opened up about their separation in her July cover story.

“It’s hard being young and having that long of a relationship and then ending it,” she told the publication at the time. “But it was for the best.”