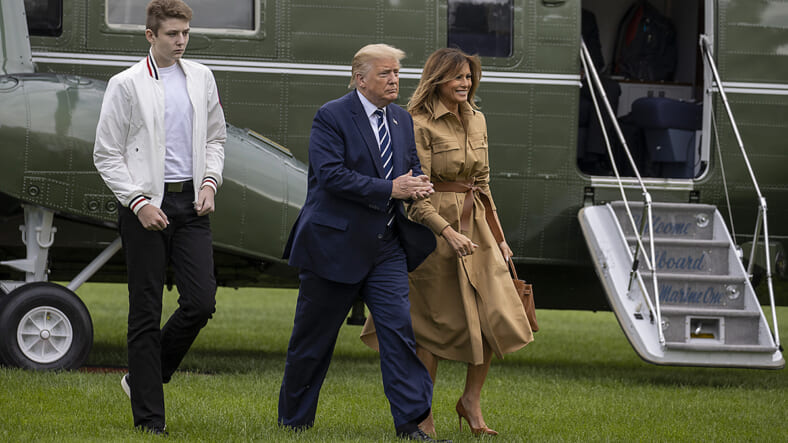 Barron Trump, US President Donald Trump and First lady Melania Trump walk on the South Lawn of the White House on August 16, 2020 in Washington, DC. Robert Trump, 71, the younger brother of the president, died Saturday in Manhattan. (Photo by Tasos Katopodis/Getty Images)

Melania Trump had the internet buzzing after she appeared to evade the hand of her husband, Donald Trump, as the first family descended from Air Force One on Sunday while arriving back to Washington following a weekend trip in New Jersey.

As the president and first lady walked down the stairs, Trump reached out to grab his wife’s hand, an otherwise sweet gesture for any married couple. But as many have noticed over the years, the Trumps are not your average couple.

In a video that has gone viral on social media, Melania moved her hand away from Donald Trump as he attempted a few times to grasp her left hand. It’s worth noting that the first lady was also holding her purse in the same hand and appeared to be holding down her dress against the wind.

Still, Twitter had a field day making jokes about what many saw as Melania Trump’s latest public rejection of her husband’s PDA. The first lady had similarly evaded her husband’s touch, including the time she appeared to swat Trump’s hand away in 2017 while the first couple met with Israeli Prime Minister Benjamin Netanyahu and his wife, Sara Netanyahu.

As Heavy points out, the next day Melania Trump appeared to avoid holding Trump’s hand again while in Rome, and instead attempted to fix her hair. In 2018, Trump tried to grab his wife’s hand with his pinky during a photo op with French President Emmanuel Macron and wife, Brigette Macron. Unlike before, Melania Trump eventually acquiesced.

“I actually believe Trump’s hand grabbing of Melania has absolutely nothing to do with chivalry & everything to do with his immobility. The fact that she refuses to steady him is hilarious!” one Twitter user wrote in response to the latest perceived snub.

“She will not take that mans hand! And it’s so obvious the way she pulls away. She hates him. Isn’t that a picture of loving parents in front of their son?” another person tweeted. “Please give me The Obama’s love story back.”

In the spirit of the 2020 presidential election on Nov. 3, one Twitter user tweeted a photo of Democratic presidential candidate Joe Biden and his wife, Dr. Jill Biden, writing, “This is what a loving couple looks like and I can’t wait until they’re back in the White House.”

She will not take that mans hand! ???????
And it’s so obvious the way she pulls away. She hates him.
Isn’t that a picture of loving parents in front of their son?

Please give me The Obama’s love story back ♥️ pic.twitter.com/8Cv7immoU3

This is what a loving couple looks like and I can’t wait until they’re back in the White House… pic.twitter.com/2SrvMmJjdh

Despite the seemingly unanimous conclusion online that Melania Trump simply can’t stand her husband, there was at least one person who extended some grace to Trump.

“Well let’s see. It’s super windy. She can barely see [as she’s] coming down. Maybe her jacket will blow up? I’m no lover of her and trump, but maybe this time it is what it is?”